Freelancers account for 36% of the American workforce, according to a recent study by Edelman Intelligence. Freelancers are also referred to as consultants or contractors. Some do it on the side while also employed at a full-time job, others freelance as their full-time job, and some freelancers only work part-time. McKinsey, a U.S.-based consulting firm, projects that 50% of the American workforce will be freelance by 2027. Freelancers who have in-demand skills like data analytics, machine learning, and programming can charge high rates and have flexibility, which will increase the demand for gig economy marketplaces.

A sweet spot in the gig economy is to act as a matchmaker, connecting freelancers to clients looking for temporary or permanent assistance with projects. The main freelance work platforms in this space are Upwork (NASDAQ:UPWK) and Fiverr (NYSE:FVRR). Both of these tech stocks are trading at lower prices from their 52-week highs, are small-cap growth companies, and have minimal debt. Investors seeking exposure to the gig economy should consider buying these today. 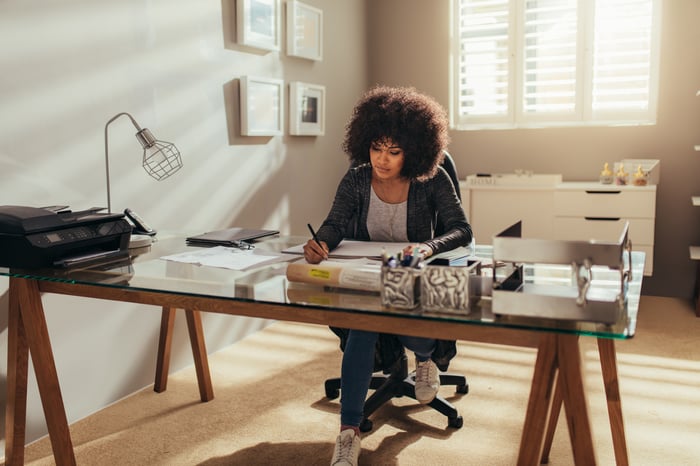 Upwork is the largest freelance marketplace site and companies can find contractors from around the world who specialize in writing, video editing, web design, digital marketing, and more. It was originally founded as Elance in 1999 and merged with competitor, O-desk, in 2013. In 2015, this merged company was rebranded as Upwork and it IPO'd on Oct. 3. 2018. It also has over 12 million registered freelancers and 5 million clients, which could grow over time with the expansion of the freelance economy.

This site has many sources of revenue, including charging a percentage of freelancers' earnings, requiring freelancers to purchase "connects" to apply for jobs, and assessing administration fees on clients. Clients can choose to pay either 2.75% of their client spend or a flat fee of $25 per month for unlimited payment transactions. Upwork has an enterprise selection for large companies that includes additional upgrades like compliance offerings, custom reporting, exclusive access to top freelancers for a monthly or annual fee.

The stock is trading around $10, which is toward the 52-week low of approximately $9. It has a positive free cash flow of $7.07 million, but it hasn't turned a profit yet. Negative earnings is common for smaller cap stocks that have recently IPO'd. However, Upwork has manageable debt with a low debt-to-equity ratio of 0.05, significant cash reserves of $131.56 million, and annual revenue that has grown over 76% from $164.45 million in 2016 to $289.31 million in 2019.

Investors may be tempted to buy Upwork when evaluating its revenue growth, profitability, the rise of freelance workers, and debt management. But they should also consider the risk of investing in recently IPO'd firms with negative profitability and that Upwork's CEO Stephane Kasriel is stepping down. Hayden Brown, chief marketing and product officer, will take his place and there was no reason given for this change.

Despite changes in leadership, investors looking to add growth stocks to their portfolios should also consider Upwork due to its impressive annual revenue growth, positive free cash flow, brand as a leading freelance marketplace site, and its bargain stock price.

Like Upwork, Fiverr is a leading freelance marketplace that connects companies (buyers) with freelancers (sellers) globally. However, on Fiverr, companies make the first move when selecting a freelancer. Unlike Upwork's connects process, Fiverr freelancers create a profile and wait for clients to contact them about assignments.

Israeli entrepreneurs Micha Kaufman and Shai Wininger founded this site in 2010 as a way for the "lean" entrepreneur to access contract talent. They also designed this site so people can earn money outside of a traditional workday.

Some freelancers offer basic services like writing product descriptions for only $5 while more complex services like web development can cost hundreds of dollars. All prices depend on additional "add on" features, complexity, work duration, and the freelancer's cost of living. These prices are set by the freelancer and the hiring party agrees with those terms. This is different from Upwork and other bid sites, as freelancers aren't sending messages to the client competing on price.

Fiverr earns revenue via transaction and services fees. It charges buyers a service fee of $2 up to $40, and 5% of the total transaction once that threshold is reached. Like Upwork, it charges sellers 20% percent of their project earnings. On top of this, it charges small transaction fees when sellers transfer money.

The growing revenue can help turn around cash flow and eventually result in profitability. Yet, investors should consider its income streams, debt management, and a small market cap of just $694 million before investing.

This stock can be considered a growth stock due to its very small market cap, lack of dividend, and negative earnings. It's volatile now, but it has room to grow due to the popularity of freelancing, low price point compared to the 52-week high, minimal debt, and high increases in annual revenue rates.

Traditional work arrangements and freelancing are becoming more popular among contractors and companies. Companies can save up to 30% in labor costs by working with contractors instead of employees when factoring in common employee benefits like health insurance, dental insurance, paid time off, and payroll taxes.

Despite this, some states like California are pushing for workers' rights by signing new laws to reclassify freelancers as employees. These states hope to give these workers access to standard employee benefits. States are pushing to add these laws to give freelancers protection like not having to pay self-employment tax, requiring employers to contribute to unemployment funds, and other responsibilities. California passed its AB 5 law that states a contractor must be classified as an employee if he or she submits 35 or more published works during the year. These new laws will make it harder to hire freelance work, which could threaten gig economy platforms. However, it will take years before these laws become established nationwide and these regulations won't completely destroy the demand for talented freelance work.

Out of these two stocks, Upwork is a better choice because it has more diversified revenue streams, low debt, and higher revenue. Investors who are knowledgeable about workplace trends, aren't worried about temporary management changes, and want growth stocks with positive cash flow along with high revenue growth should consider adding Upwork to their portfolios for 2020.