Restaurant stocks including Chipotle Mexican Grill (CMG 2.00%), Shake Shack (SHAK 2.27%), and Texas Roadhouse (TXRH 2.05%) all tumbled today as industry stocks were battered along with the broader market on a coronavirus warning from President Trump. The president said Tuesday that the next two weeks would be "very, very painful" as COVID-19 spreads through the country, and a White House task force projected that 100,000 to 240,000 Americans would die from the virus in the coming months.

That news rattled investors, with the S&P 500 closing down 4.4%, and restaurant stocks falling sharply as the industry is at the mercy of the virus, which has forced restaurants across the country to limit themselves to takeout and delivery. 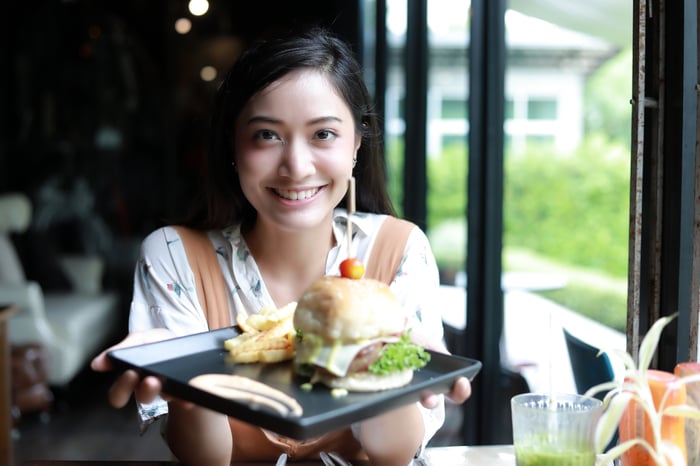 Chipotle said this morning that it is extending free delivery through the month of April as dining rooms in most of its locations are closed because of COVID-19.  The company also said it would thank healthcare workers with free burritos over the next week, planning to give away up to 50,000 burritos in honor of National Burrito Day and World Health Worker Week.

SunTrust analyst Jake Bartlett lowered his price target on Chipotle stock from $1,010 to $841, though he maintained his buy rating on the company, saying its digital business and balance sheet put it in a stronger position than many of its peers.

Shake Shack also got dinged by Bartlett, who lowered his price target on the fast-casual burger flipper from $71 to $43 in part because of its exposure to New York City, the epicenter of the outbreak in the U.S. right now.  Shake Shack had said earlier that it would shift to a "to go" model due to the impact of the coronavirus and withdrew its financial guidance for the year. On Tuesday, the company also took the novel step of making its burgers available in meal kits through delivery company Goldbelly, where Shake Shack founder Danny Meyer sits on the board.

There was no company-specific news out on Texas Roadhouse, but as a casual dining chain, the company may be more at risk than its fast-casual peers as it relies on dine-in customers for a greater percentage of its business. The steakhouse chain had also said earlier that it would expand its "to go" service and offer curbside pickup at restaurants in states that have been affected by stay-at-home orders. The company also drew down $190 million from a credit facility to increase its financial flexibility and liquidity.

Considering that the coronavirus has yet to peak in the U.S., investors should expect more pain. Florida, for example, just issued a stay-at-home order today, which will likely dampen business for restaurants in the nation's third-most-populous state. President Trump also said Tuesday that social-distancing guidelines would be in place for 30 days in order to stop the spread of the virus. In other words, restaurant investors who were hoping for a quick recovery are going to have to wait at least a little longer.