The company doesn't yet appear to have the DRAM and NAND pricing power indicative of a recovering enterprise tech market.

The post-earnings spin was bullish, and understandably so. Micron Technology (MU 3.23%) shares soared last week following its fiscal second-quarter earnings beat, bolstered by encouraging guidance for the quarter currently underway. Apparently, the surge in at-home work created by the reaction to the coronavirus pandemic is driving new demand for computers at the same time many data centers are being forced to improve their capacity to accommodate that growth in the number of people working from home. It's a development that's taking shape at a time the computer hardware market was presumed to be coming out of a lull anyway.

If the hardware market is truly past a cyclical trough, however, there's one indicator suspiciously not aligning with the idea. That's pricing. The average price of the memory chips required to make servers and computers function remains very near multiyear lows reached late last year. Data storage prices aren't faring any better. Perhaps most alarming is that technology market research outfit IDC recently suggested server demand would be crimped this year, hitting Micron where it hurts the most. 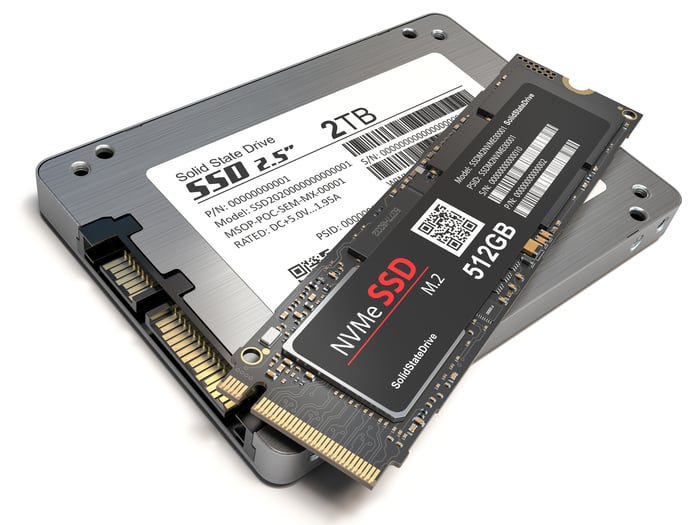 Be wary of jumping to any concrete conclusions related to the coronavirus pandemic. As Micron CEO Sanjay Mehrotra acknowledged in the company's Q2 earnings call, "This is a very fluid situation, and we will learn more about the virus, its spread and its economic impact over the next few weeks and months."

And yet, Mehrotra was willing to say, "Enterprise PCs and other PCs for virtual learning along with greater demand in the data center world is a tailwind for us," adding the company has "been moving supply from smartphone to service the strength in data center markets, for both DRAM modules as well as SSDs." All told, once the COVID-19 outbreak is contained, Micron's chief expects DRAM (computer memory) demand to grow at an annual pace in the mid-teens to high teens percentage-wise, while NAND (hard drives and flash memory) demand is expected to be somewhere around 30%.

Maybe both of those outlooks are on target. If they are, though, purchasing interest doesn't appear to have perked up yet.

Computer component pricing website PCPartPicker.com visualizes the data for both DRAM chips (top chart) and NAND hard drives (bottom chart), both of which are necessary for personal computers as well as servers. Neither is showing any decisive hint of higher prices one would expect to see if companies as well as consumers were starting to plan en masse purchases.

Take the pricing data with at least a small grain of salt. The coronavirus shutdown has largely stymied corporate activities other than ones necessary to deal with the immediate crisis. Perhaps that demand is quietly building in the background.

Technology market research company IDC isn't so sure that's the case, though. Despite a solid surge in server hardware purchases during the fourth quarter of last year, IDC is estimating a 3.4% decline in server spending this year due to the COVID-19 pandemic. Enterprise-level spending on external storage systems is projected to sink 5.5%, in contrast with Micron's optimistic outlook.

It matters more than most Micron investors might suspect. Roughly 40% of the company's revenue is driven by its computer and networking business unit, which specifically caters to the cloud server, enterprise, graphics, and networking markets. Notice how each unit's operating income appears to be even more sensitive to price-driven revenue changes than revenue itself, growing in 2018 with strong NAND and DRAM pricing, then slumping last year when memory and storage prices did the same. 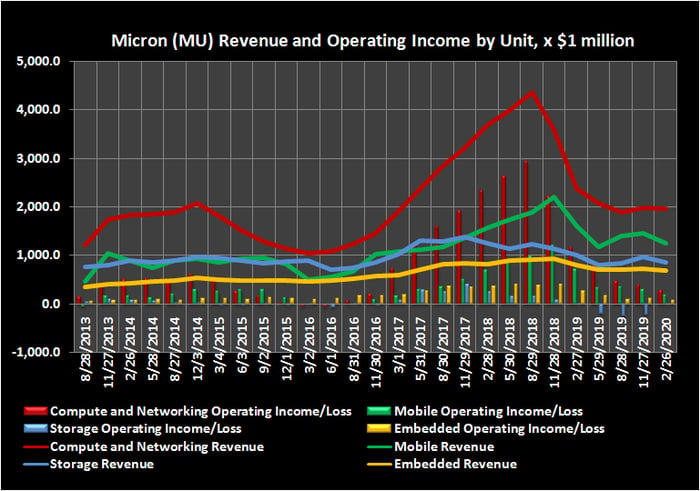 Micron, along with peer and rival Samsung, might have experienced a bump in demand for DRAM and hard drives thanks to the coronavirus outbreak's prompting of new computer purchases. It may be a bit of wishful thinking to believe that the market is going to carry much weight for the computer hardware industry, however. Remember, PC sales declined for seven straight years before finally showing a (very) modest 2.7% recovery last year, according to numbers also from IDC. That's hardly a sign of new, game-changing growth for the struggling industry, and it stands to reason that any employees forced to work at home due to the coronavirus have already purchased the equipment they need. In the meantime, fresh demand for memory chips and hard drives doesn't seem to be a strain on current supply.

Micron may well see greater unit sales from here -- maybe. Right now, though, there's little apparent pricing power that will lead to meaningfully stronger margins. The same headwind that's supposed to be crimping the supply appears to be equally crimping demand from OEM and suppliers that utilize Micron's tech.

Again, however, Mehrotra is absolutely right at least about one matter. This is a fluid situation, subject to change at any point in the foreseeable future.