The COVID-19 pandemic has sapped demand for new commercial aircraft.

General Electric (GE -1.81%) reportedly plans to furlough about half of the workers in its massive aircraft-engine manufacturing unit for up to four weeks, the latest in a number of similar cost-cutting actions by companies with exposure to commercial aerospace trying to adjust to rapidly falling demand.

On March 23, GE said it would cut its overall aviation workforce by about 10%, in response to the pandemic-generated slump in travel that has led airlines to cut flights, ground aircraft, and postpone purchases. 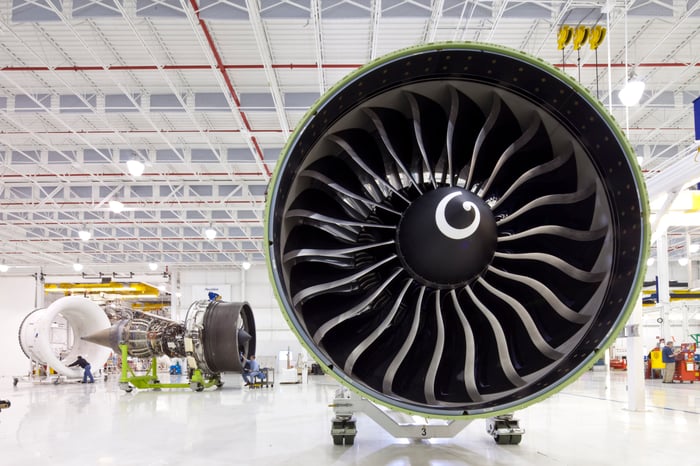 "Due to the unprecedented impact of COVID-19 on the commercial aviation industry, GE Aviation is implementing a temporary reduction in commercial engine assembly and some component manufacturing operations for up to four weeks," a GE spokesperson said.

That was just one of several cost-cutting measures announced by a commercial aerospace giant on Thursday. Boeing on Thursday said it was offering early-retirement and buyout packages to its workforce, admitting that it does not expect demand for new planes to rebound quickly and is therefore trying to adjust "to our new reality."

TransDigm Group, a major supplier to both Boeing and Airbus and a maker of spare parts, is cutting about 15% of its total workforce as part of a broader campaign to cut costs.

Air travel is still forecast to grow over the next two decades, but those airlines that survive the pandemic are going to be in no position to aggressively buy new planes any time soon. The International Air Transport Association expects airlines globally will burn through about $61 billion in cash during the current quarter, and could lose upwards of $250 billion in revenue for all of 2020.