March numbers didn't even reflect the full brunt of the millions of layoffs later in the month.

The coronavirus pandemic has threatened the health and livelihood of people across the globe. In response to the spread of the COVID-19 outbreak, many government officials have forced nonessential businesses to close their doors, forcing those who can to work from home and those who can't to suffer furloughs or layoffs.

On Friday morning, the Bureau of Labor Statistics released the latest numbers on the employment situation in the U.S., and they were even worse than many had feared. Yet as disappointing as the numbers were compared to last month's job gains, there's good reason to believe that figures on unemployment and net job losses are only likely to get worse as data collection catches up with the scope of the coronavirus crisis. 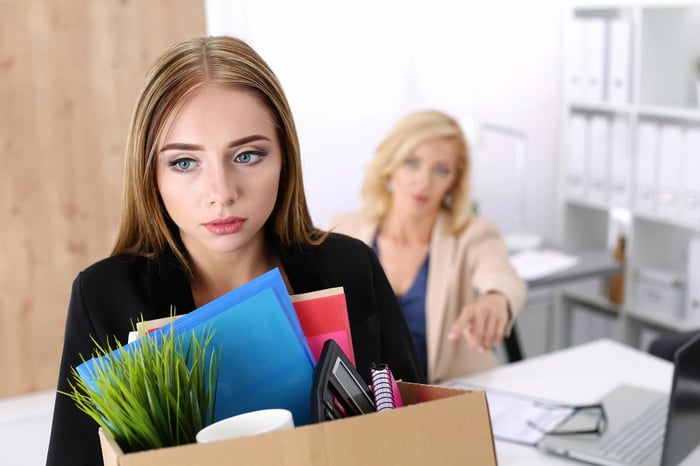 The big hit to the U.S. economy

The jobs report's headline numbers were stark. Non-farm payrolls dropped by 701,000 jobs in March, reversing course from the revised 275,000 jobs created in February. The report was the first time that more jobs were lost than created in a month since September 2010, and it was the worst showing since the financial crisis and January 2009's 741,000 jobs lost.

The unemployment rate saw a similarly sharp move. March's reading climbed to 4.4%, up from 3.5% in February. That was a bigger jump than any seen during 2008 and 2009, and it put unemployment at its highest rate since August 2017.

Which industries got hurt the most?

Yet the impact was widespread. Healthcare and social assistance jobs were down 61,000, with particularly sharp losses in dental and doctor offices. Professional and business services saw job losses of 52,000, mostly due to the disappearing market for temporary help workers. Retail lost 46,000 jobs, and construction took a 29,000 job hit for March. Just about the only bright spot came from government work, with hiring related to the 2020 U.S. Census creating a net 12,000 jobs there.

Why March's numbers could actually be even worse than reported

The jobs data already show many of the economic disruptions that the coronavirus has caused. Yet these are just preliminary numbers, and the March figures don't actually reflect everything that happened during the month.

The reason is that the two surveys on which the Bureau of Labor Statistics relies use the pay period that includes the 12th day of the month as their reference period. March 12 was a Thursday, and so workers paid weekly and biweekly would have had pay periods that were relatively early in the month.

Yet we already know that conditions in the employment sector got a lot worse in the second half of March. Jobless claims for the week of March 21 jumped to nearly 3.3 million, and were even higher the following week, soaring to more than 6.6 million in the week of March 28. When those numbers filter through, they're likely to result in a sharp downward revision to March numbers that we'll see in the next jobs report in early May.

That said, the stimulus bill passed late last month could be a wildcard in the future employment picture. Restaurant stocks like Chipotle Mexican Grill (CMG 1.48%) had plunged as investors foresaw massive layoffs, but federal assistance could help Chipotle and others hang on to their workers through the crisis. That could lessen the blow to the workforce overall.

As more government economic data comes in, it'll give more insight into how the coronavirus pandemic is hurting the financial lives of millions of people in the U.S. and worldwide. It's more important than ever, though, to understand the limitations of government data so that you don't let it mislead you. In this case, even ugly numbers might not tell the full story of just how disruptive the coronavirus has been -- and how it may already have pushed the economy into a deep recession.

It's Important Right Now to Be Wary of "Anchoring"