Please ensure Javascript is enabled for purposes of website accessibility
Log In Help Join The Motley Fool
Free Article Join Over 1 Million Premium Members And Get More In-Depth Stock Guidance and Research
By Dan Caplinger - Apr 3, 2020 at 11:31AM

Strong business results show that some companies are weathering the pandemic.

Even as the coronavirus bear market has crushed many stocks, a few have found ways to gain ground. Chewy (CHWY -4.68%) has been one of the winners from consumers having to stay at home with their pets rather than going out to shop for them, and MarketAxess Holdings (MKTX -0.63%) has benefited from the shift toward electronic trading in the bond market. Only one of these stocks gained ground Friday morning, but they both have solid prospects for future growth.

Shares of Chewy fell 4% in the wake of the company's release of fiscal fourth-quarter financial results. The pet supply e-tailer has gained in popularity as a result of pet owners stocking up on the things they need to take care of their animals, but some aren't sure that'll translate into greater profit over the long run. 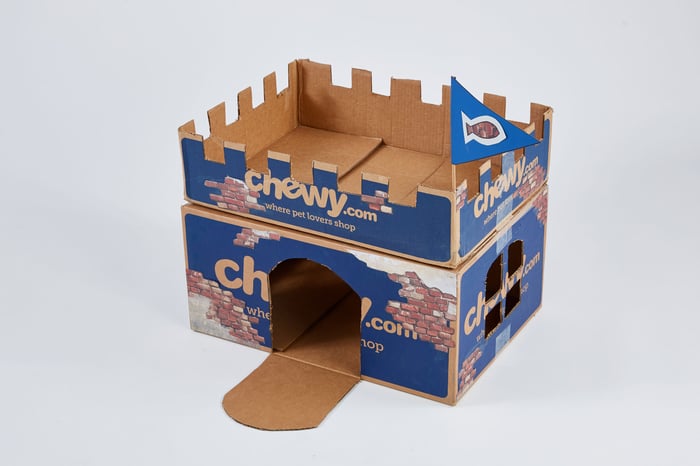 Chewy's financial numbers were mixed. Revenue for the quarter jumped 35% from year-earlier levels on a comparable-calendar basis, closing a fiscal year in which sales soared 40% from fiscal 2018 results. Gross margin improved as well, rising more than 3 percentage points to 24.1%. Yet net losses only narrowed slightly year over year, with Chewy posting almost $61 million in red ink in Q4 and more than $252 million for the year.

Chewy is also optimistic about the current quarter, projecting sales growth of 35% to 37% compared to the year-ago period. So far, the company hasn't seen any supply disruptions from the coronavirus outbreak, in part because the majority of its products come from sources within the U.S. rather than having to be imported.

However, Chewy didn't offer guidance for the full 2020 fiscal year, and investors seemed worried about the company's ability to keep up its pace of growth. Even with today's decline, however, Chewy's share price is still up 17% over the past month, reflecting the belief that people's love for their pets will keep the company successful.

Meanwhile, MarketAxess Holdings saw its stock climb 6%. The electronic bond trading specialist has seen a rise in interest lately, as the bond market has been volatile and gotten a lot of attention from the financial community, as well as investors seeking to flesh out their asset allocation strategies.

Investors have loved MarketAxess' efforts to bring the bond market into the 21st century, keeping the stock on the rise over the past month even as the broader market fell. The success of the company during the coronavirus crisis only highlights the long-term potential that MarketAxess has in the years to come.

After Hours: MarketAxess and Axon Rise Up the S&P Ranks, CrowdStrike CEO Joins HPE's Board