Please ensure Javascript is enabled for purposes of website accessibility
Log In Help Join The Motley Fool
Free Article Join Over 1 Million Premium Members And Get More In-Depth Stock Guidance and Research
By Stephen Lovely – Apr 4, 2020 at 9:35AM

Most streaming services are launching as planned, but there have been hiccups.

The COVID-19 pandemic has brought dramatic changes all around the world, and most of those changes have been unpleasant for publicly traded companies. With few exceptions, stocks have been mostly sliding since Feb. 20, sometimes dramatically. Businesses are facing difficulties in reaching customers who are increasingly self-isolating, quarantining, or being locked down by government orders. And people have less to spend now as unemployment claims skyrocket to historic levels.

All of this has a little silver lining for streaming services. For streaming-focused companies like Netflix (NASDAQ: NFLX), the whole idea is to reach customers at home. And individuals and families who are staying in have shown a tendency to watch more home entertainment (including, but not limited to, streaming services) under these circumstances. That's a nice boost for Netflix, Disney-owned (DIS -2.60%) Hulu, and other established services. But what about those services that have yet to launch?

Arriving in the midst of all of this isolation could boost numbers, but it could also present logistical challenges. Here's how some major streaming launches are faring. 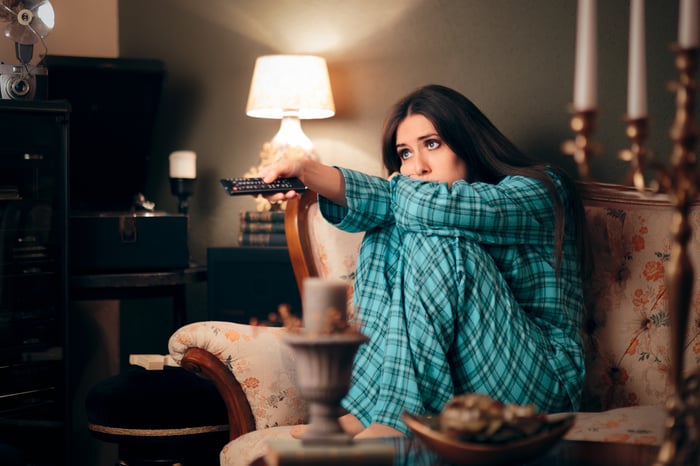 Disney timed things pretty well with its U.S. Disney+ debut. A big-time launch in November exceeded expectations. The momentum seemed to carry Disney+ along very well and Disney+ is in a position to enjoy increased streaming numbers during these unusual times. That's a nice consolation prize given Disney's overall situation right now. The entertainment giant is taking big hits from the loss of revenue from theme parks that are closed and theatrical releases that have been canceled.

But Disney+ didn't launch in Europe until March 24 -- and it still hasn't launched everywhere. While the service hit the market on time in the United Kingdom and in most other countries in Western Europe, it did so with 25% less bandwidth for streaming data. And Disney delayed its Disney+ launch in France to April 7. These delays and streaming bandwidth caps are designed to avoid overloading communications networks that are already overburdened in the midst of this crisis.

Disney+ was supposed to come to India in March, too, to coincide with the Indian Premier League cricket tournament, a massive sporting event in India. The tournament is now postponed, and so is Disney+'s launch in India. Instead of launching March 29, Disney+ is now scheduled to reach Indian viewers on April 3.

Disney is delaying some launches, but it's at least up and running in the United States. Not so with AT&T's (T -1.42%) HBO Max, which is scheduled to launch in the United States in May. TechRadar reports that the exact day in May is not known, though the May launch has been known since October.

HBO Max is launching only in the United States, where broadband infrastructure is strong and AT&T already has a foot in the door with many internet and pay TV customers.

Abroad, HBO Max has some time to get its ducks in a row. Launches in Latin America are reportedly planned for 2020, but HBO Max was already planning on making it to 2021 before landing in Europe. Issues like existing HBO contracts in places like the United Kingdom and Spain may end up being a bigger problem than COVID-19 by the time HBO Max crosses the pond.

HBO Max isn't getting off totally scot-free, though. Its planned Friends reunion -- a key piece of original content for the soon-to-launch service -- will reportedly be delayed by the COVID-19 crisis.

HBO Max isn't the only big service slated to make its U.S. debut in the midst of a pandemic. Comcast's (CMCSA -1.94%) Peacock is supposed to reach streamers beginning with a soft launch on April 15. A full national debut is set to follow on July 15.

Like AT&T, Comcast has caught a few breaks. Peacock's full launch is months away, and the crisis could look very different (and, hopefully, much better) by then. And Peacock is launching in the United States only, so broadband infrastructure and bandwidth restriction issues should not be the type of concern that they have been for Disney+ in Europe.

But Peacock does have problems. Its launch was designed to coincide with the Olympics, which NBC has TV rights to. Those Olympics will not be happening this year. Peacock will launch on time, but without a huge selling point in the form of streaming Olympics coverage.

Quibi may be the most unusual upcoming streaming launch, and may be one of the more interesting ones to watch.

A private business with $1 billion in funding from Disney, Comcast's NBCUniversal, AT&T's WarnerMedia, and Sony (NYSE: SNE), among others, Quibi is hoping to shake up the streaming market by offering bite-sized portions of entertainment, which the company, somewhat optimistically, hopes the public and press will call "quibis." Partnerships with the BBC, Comcast-owned NBC, Disney-owned ESPN, and others will provide lots of short-form content for viewers to watch.

And Quibi plans to launch on time -- the big day is April 6. A U.S.-only will make things a bit easier. Quibi has not set a launch date for its planned expansion to the U.K. and Australia.

But Quibi's quick-bite "quibis" are explicitly designed for a fast-moving public short on free time. These are clips to sneak once in a while at the office. It's fair to wonder how popular they'll be when the office is a living room and there's no need to hide in the bathroom to watch streaming content. Quibi's model may be the worst streaming fit for this bizarre moment. On top of this, some of Quibi's content partners may have a bit less to offer mid-crisis. ESPN, for example, will have a harder time coming up with compelling sports content at a time when sports are virtually non-existent. Whatever happens, we'll know soon enough -- and on schedule, despite the crisis.