Please ensure Javascript is enabled for purposes of website accessibility
Log In Help Join The Motley Fool
Free Article Join Over 1 Million Premium Members And Get More In-Depth Stock Guidance and Research
By Keith Speights – Apr 5, 2020 at 9:01AM

You're not going to find a better stock to spend your stimulus money on than this one.

The check is in the mail. OK, we hope that it soon will be -- or a direct deposit to your bank in its place. I'm referring, of course, to the $1,200 payment that most Americans will receive thanks to the passage of the Coronavirus Aid, Relief, and Economic Security (CARES) Act.

For many people, this money will be needed for helping to make ends meet during these uncertain times. For others whose jobs haven't been impacted by the COVID-19 pandemic and who have an emergency fund already established, the stimulus checks will provide extra cash that can be put to great use in ensuring your financial future by investing in stocks.

There are plenty of attractive stocks to buy right now in the midst of the market downturn. But, in my opinion, the best stock to buy with your coronavirus stimulus check is none other than Alphabet (GOOG -2.61%) (GOOGL -2.70%). Here's why Google's parent is my top pick. 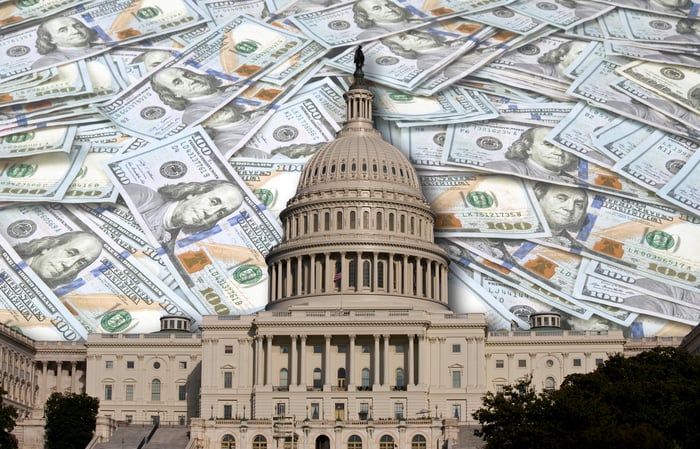 A solid pick for cautious investors

With the stock market meltdown and the world as we know it being turned upside down, I totally understand that many investors will tend to be very cautious. If you're in this group, I think Alphabet is a stock that should be right up your alley.

There are two things that cautious investors should look for in a stock during the coronavirus bear market: a strong financial position and a resilient business. Alphabet definitely has both.

The company sits on a massive cash stockpile (including cash, cash equivalents, and marketable securities) that totaled $119.7 billion as of the end of 2019. It's a pretty safe bet that Alphabet has even more cash now. The company averaged nearly $8.6 billion in profits over the last four quarters. It could make a fraction of that average and still cushion its nest egg.

Alphabet does have debt of a little over $4 billion. But as big of a number as that is, the tech giant could probably pay it all off with its pocket change -- not that it would want to do so with interest rates so low.

Even more reassuring is Alphabet's rock-solid business. Sure, the company could see advertising revenue decline somewhat over the short term as some businesses cut spending. But the targeted audiences that Alphabet's properties, including Google Search, YouTube, and Gmail, deliver for advertisers are hard to beat. It's likely that ad budgets will be slashed in other areas first before cuts are made to Alphabet-owned channels. Also, with so many people staying at home amid quarantines and shelter-at-home mandates, Alphabet's traffic numbers could soar.

The most important thing to remember is that the COVID-19 crisis is only temporary. Alphabet has lost nearly $300 million in market cap over the last six weeks. Is this super-successful company really worth that much less because its advertising could be affected for a few months? I don't think so.

... and a great choice for aggressive investors, too

While cautious investors should find a lot to like about Alphabet, more aggressive investors should like the stock as well. Even though it's one of the biggest companies on the planet, Alphabet still has tremendous long-term growth prospects.

For one thing, Alphabet is a relative newcomer in the cloud infrastructure market. Its Google Cloud revenue soared 53% year over year in the fourth quarter of 2019. Although Alphabet is still way behind Amazon.com in total cloud revenue, the company's cloud sales are growing much faster than its biggest rival in this market.

Alphabet's artificial intelligence (AI) initiatives should open up a ginormous market opportunity for the company. Its Google Nest AI-enabled smart home products represent just the tip of the iceberg. My view is that Alphabet's Waymo self-driving car business could really take off over the next decade.

I'm not the only one who is optimistic about Waymo. UBS analyst Eric Sheridan has predicted that Waymo could generate more than $100 billion in annual revenue by 2030. To put that projection into perspective, that's more than Alphabet's total revenue from just four years ago.

Alphabet could also disrupt healthcare in the not-too-distant future. Its Verily Life Sciences subsidiary is partnering with a number of prominent biotechs, pharmaceutical companies, and medical device makers to develop products that use data to improve healthcare. Alphabet's Calico has an even more ambitious goal of extending human life span by tackling the problem of aging.

There are two key things that I look for in a stock: a strong moat and optionality (i.e., multiple ways to grow). Alphabet certainly has a strong moat. No one is going to knock off Google Search or YouTube anytime soon. And the company's cloud infrastructure, AI, and healthcare businesses provide plenty of optionality. Checking on both of these boxes makes this tech stock a top choice to buy with your coronavirus stimulus check.