Please ensure Javascript is enabled for purposes of website accessibility
Log In Help Join The Motley Fool
Free Article Join Over 1 Million Premium Members And Get More In-Depth Stock Guidance and Research
By Billy Duberstein - Apr 5, 2020 at 8:12AM

As the market had one of its worst months ever, Teladoc defied gravity.

Shares of Teladoc Health (TDOC 4.88%) miraculously surged 24% in March, according to S&P Global Market Intelligence. The telemedicine company benefited from investors who believe its services will become hugely popular both during and after the COVID-19 outbreak. Not only did Teladoc have a great March, but its stock is also up 90% since the calendar flipped to 2020. 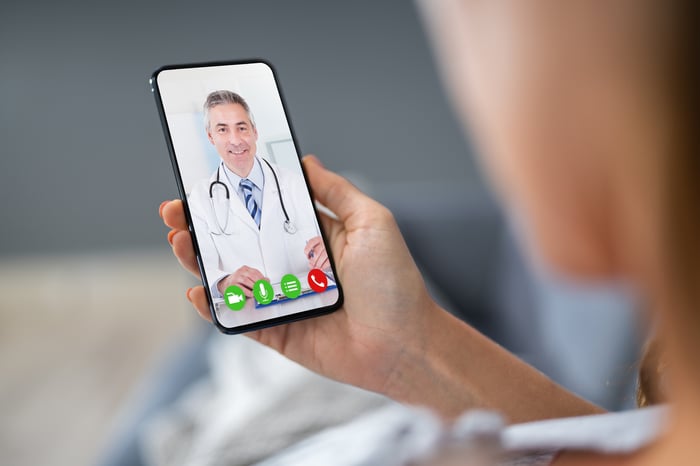 Teladoc was already coming off a strong February earnings report in which the company beat revenue and earnings estimates, while giving solid guidance for 2020.

Teladoc surged again in March as the COVID-19 virus swept across the USA, which greatly increased adoption of telemedicine services. After all, no one wants to have to go out to a doctor's office or hospital these days, around other potentially sick people, if they don't have to. On March 13, the company issued a press release saying it had seen usage spike 50% just over the prior week.

Teladoc further said that as various authorities have encouraged telemedicine services in order to prevent hospitals from getting overwhelmed, more than half the visits this month have come from first-time visitors. That could mean an acceleration of telemedicine adoption in the U.S., which is probably what drove Teladoc's stock to higher and higher levels.

As of this writing, Teladoc has a price-to-sales ratio of 21, which seems a tad expensive given its recent revenue growth rate of 27.5%, below those of other software-as-a-service stocks. While the company also isn't generating profits, its net losses are close to breakeven and the company is generating free cash flow, along with a net cash position of $517 million versus $440 million in convertible debt.

Teladoc's valuation is not as unreasonable as other darling stocks such as Zoom Video(ZM 2.78%), which has a price-to-sales ratio triple that, yet it also remains to be seen exactly how the spike in usage will positively impact Teladoc's future growth and profitability. Yet while investors should be cautious on valuation, Teladoc's business is almost certain to benefit on a fundamental basis going forward.