The company is weathering the coronavirus better than some thanks to strong delivery sales.

Domino's Pizza (DPZ 1.19%) announced this morning that every one of its American restaurants will take a cheese-covered stand against the coronavirus this week by donating 200 pizzas each in their neighborhoods. With 6,128 Domino's outlets currently operational countrywide, that works out to approximately 10 million individual slices of pizza.

Healthcare and hospital workers, people working in grocery stores, school kids, and "others in need" are listed as the intended recipients of this generosity. While these people are mentioned as high-priority pizza receivers, Domino's is leaving franchisees some flexibility in choosing who will get the donated food. 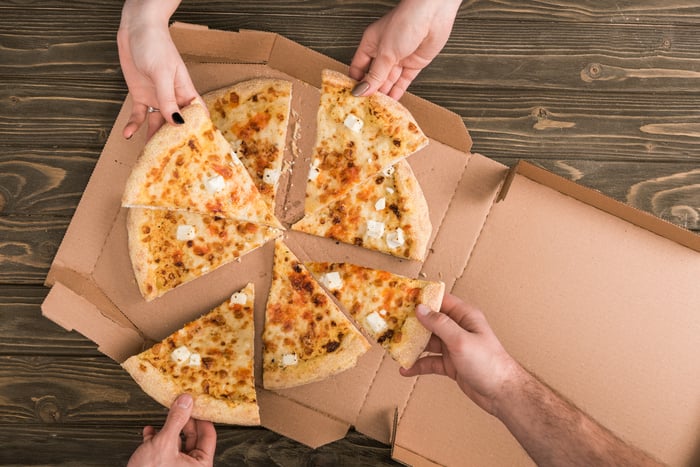 Some individual franchisees are upping the ante by gifting larger numbers of pizza than the company requires. The company mentioned both Jason Shifflett of Memphis and Shane Casey of San Diego as franchise operators who voluntarily chose to donate 1,000 pizzas apiece from their restaurants, not just 200.

Domino's, which has fought hard to maintain its market position by becoming a "tech company that delivers pizzas," has been cooking up solid profits from the huge increase in takeout and delivery during the COVID-19 pandemic. The company is seeking 10,000 new workers at a time when many businesses are furloughing their workforces.

Domino's COO Russell Weiner remarked, "We have a long history of feeding people during times of crisis and uncertainty. When we were looking at how we could help, we knew we could use the reach of our national brand to make a difference in thousands of local neighborhoods."