A light appears at the end of the tunnel.

This morning, positive news began filtering out of Europe regarding a slowdown in the rate of deaths from people infected with the novel coronavirus, with Deutsche Bank reporting that the "fatality rate" has slowed somewhat in Italy and Spain.

Here in the U.S., Vice President Pence reported "glimmers of progress" and President Trump said he sees a "light at the end of the tunnel."

Stocks across the spectrum are responding positively to the positive sentiments, and solar stocks are no exception. Shares of Vivint Solar (VSLR), SolarEdge (SEDG 0.69%), and SunPower (SPWR -1.92%) all surged well over 10% in early trading. As of 12:35 p.m. EDT, the latter two stocks are continuing to hold onto most of their gains, with SolarEdge still up 12.7%, and SunPower up 13.8%. Vivint, on the other hand, is sagging as the day wears on -- up only 3.2%. 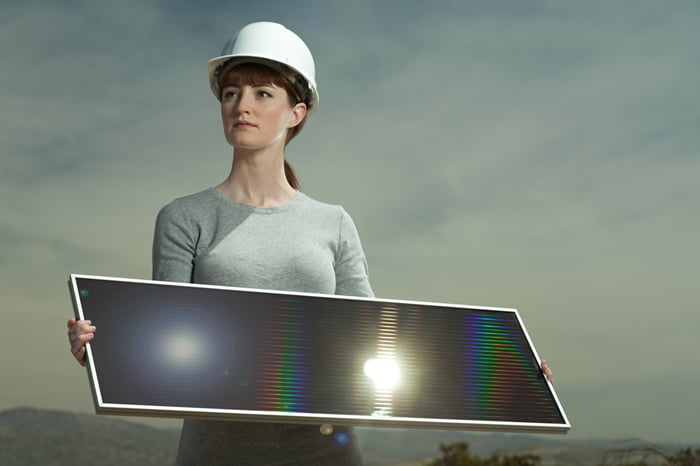 Why is Vivint underperforming its peers? That's hard to say.

There's no real news of note directly mentioning any of these three solar stocks, and certainly no bad news about Vivint. If I had to guess, though, I'd say investors are working on the assumption that if the economy recovers quickly after the end of the coronavirus crisis and the recession it has spawned, utility-scale solar companies will be the ones best positioned to resume buying solar panels (SunPower) and solar inverters (SolarEdge) first.

Cash-stressed homeowners, on the other hand, may take longer to regain their financial footing, and with Vivint catering primarily to the residential market, that might mean it will take longer for Vivint to benefit from a presumed recovery than the rest of the solar industry.

Whether this theory will reflect how things indeed play out remains to be seen. In the meantime, however, I'd urge investors to also keep an eye on the oil market, which is slipping again today on worries that Russia and Saudi Arabia could take a while to work out their differences and cut production enough to stop the slide in oil prices.

The lower the price of oil goes, and the longer it remains low, the less demand you'd expect to see for solar power as an alternative to oil. That could be a drag on all solar stocks, residential and utility-scale alike.