Please ensure Javascript is enabled for purposes of website accessibility
Log In Help Join The Motley Fool
Free Article Join Over 1 Million Premium Members And Get More In-Depth Stock Guidance and Research
By John Bromels – Apr 7, 2020 at 11:56AM

The military contractor's guidance impressed the stock market, but it was mostly a beneficiary of good timing.

Shares of unmanned aerial vehicle (UAV) manufacturer AeroVironment (AVAV -5.07%) rose 18.6% in March, according to data provided by S&P Global Market Intelligence. It was one of the rare stocks to post a gain during the month, when an oil price drop and coronavirus fallout caused the S&P 500 to fall by 12.5%.

AeroVironment manufactures different types of military drones and is constantly competing for lucrative contracts with the U.S. government and foreign customers. Its shares tend to be pretty volatile, and they certainly bounced around quite a bit in March. 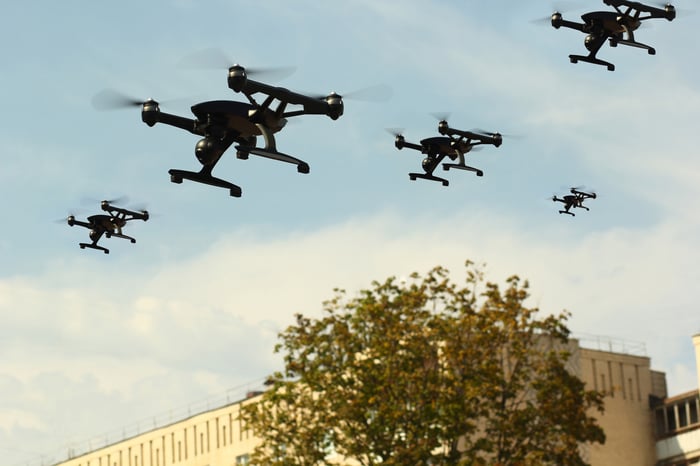 In the three days after the company reported a surprise Q3 2020 net loss on March 3, shares actually rose by 14.1% because CEO Wahid Nawabi raised the company's FY2020 guidance by $0.20 per share to a midpoint of $1.65 per share. The timing was fortuitous because the subsequent oil price collapse caused shares to tumble, and coronavirus fears routed the whole market (AeroVironment included) just three days later, on March 12.

The company's shares popped after news broke on March 17 that it was teaming up with fellow UAV maker Draganfly to market AeroVironment's Quantix Mapper system, but they tumbled again the next day as more bad coronavirus news hit. Finally, they soared to end the month up 18.6% on no apparent news whatsoever.

Volatility has been the name of the game with AeroVironment, shares of which have ranged from less than $50 per share to $120 per share over the last three years. Sometimes, like in March, that volatility pays off for investors. But anyone who buys into this fast-moving tech sector should expect a lot of share price movements.

It's worth noting that on April 1, the stock suffered an 11.42% drop. If AeroVironment's positive earnings news had come at the end of February, and March had ended a day later, the company's shares would have posted an 11% drop for the month.

Even with its share-price changes, AeroVironment trades -- as usual -- at a pretty high multiple of more than 46 times earnings. Right now, though, the share price is near its two-year lows, which means if you're bullish on AeroVironment and think it can maintain its technology edge in the drone space, now isn't a bad time to consider buying in.