Please ensure Javascript is enabled for purposes of website accessibility
Log In Help Join The Motley Fool
Free Article Join Over 1 Million Premium Members And Get More In-Depth Stock Guidance and Research
By Lou Whiteman – Updated Apr 8, 2020 at 11:19AM

Amazon is at least temporarily pulling back its rival delivery service.

Shares of FedEx (FDX 1.44%) were up more than 6% on Wednesday morning on reports that Amazon.com (AMZN -0.64%) is at least temporarily scaling back its shipping ambitions. FedEx shares were punished in 2019 in part because of the threat of new competition from the e-commerce giant, and investors are cheering the reprieve.

FedEx and Amazon went through a very public breakup last year, with the former FedEx customer transitioning to become a rival. Late in the year, Amazon limited the ability of third-party merchants to ship with FedEx, pushing more business toward its internal service.

The Wall Street Journal reported late Tuesday that Amazon was suspending its service delivering non-Amazon packages as it reevaluates the offering. The decision comes as Amazon is devoting more resources to delivering needed goods during the COVID-19 pandemic. But reading between the lines, it appears that Amazon's trials have found the service hard to operate cost-effectively. 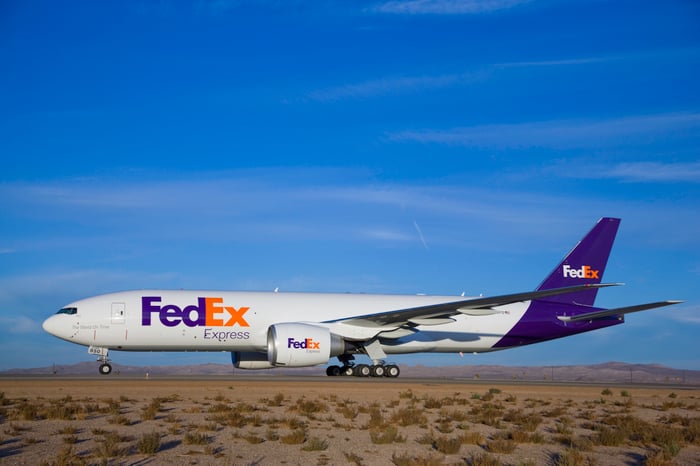 The suspension is at least a temporary positive both for FedEx and United Parcel Service (UPS 1.87%), which will pick up much of the slack Amazon is creating. FedEx has been investing billions in recent years to increase its U.S. capacity to handle more e-commerce shipments, and Amazon's move should help those investments pay off quicker than they would have otherwise.

Amazon might eventually return with a revamped, more efficient offering, so it is too soon for FedEx to declare victory. But I've been saying for some time now that Amazon is likely to find its push into shipping to be more expensive than it initially believed, and the threat to FedEx and UPS is less than markets had perceived.

FedEx is also likely benefiting from a more upbeat tone concerning the pandemic, which is fueling hopes that the U.S. economy can avoid a full-blown recession.

As with the battle against Amazon, it's much too soon to declare the U.S. economy will get through the pandemic without a downturn that will eat into shipping volumes. FedEx has suspended guidance and tapped available credit lines and expects its business to be negatively affected in the quarters to come.

But while calendar 2020 might be ugly, FedEx has the wherewithal to survive a downturn. Investors on Wednesday are optimistic the company might face a less hostile competitive environment in the quarters to come.