Please ensure Javascript is enabled for purposes of website accessibility
Log In Help Join The Motley Fool
Free Article Join Over 1 Million Premium Members And Get More In-Depth Stock Guidance and Research
By Will Healy - Apr 11, 2020 at 1:00PM

The answer has less to do with coronavirus than it might appear.

The COVID-19 pandemic has brewed strange circumstances for Anheuser-Busch InBev (BUD 0.70%). The Belgium-based beer producer has seen its stock drop as bars close their doors and consumers take their alcohol consumption into the home.

However, the fear of coronavirus appears to have taken InBev stock into oversold territory. Though this may make shares look attractive, investors may want to avoid this name long-term as society moves past COVID-19 and the stock's previous issues return to the forefront.

Beer sales have suffered for years

InBev's troubles did not begin with COVID-19. Its stock peaked in 2016 at $136.08 per share. It has seen a slow decline since that time, but its drop in value accelerated amid pandemic-induced selling.

The industry has been hurt by falling beer sales for many reasons. According to the Distilled Spirits Council, consumers have increasingly turned to liquor. Despite that trend, analysts believe InBev will grow its earnings over time. Still, that will probably occur due to an emphasis on premium brands and a deeper expansion into emerging markets, not a new-found love for beer in the developed world. 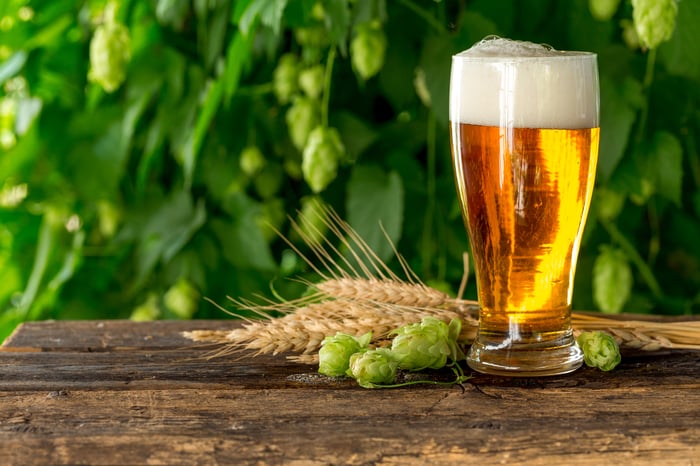 Moreover, the emergence of craft brewers has further cut into sales of better-known, mass-produced beers. InBev has mitigated this by buying out some craft breweries. The proposed purchase of the Craft Brew Alliance is a recent example. However, according to the Brewers Association, more than 7,200 craft breweries exist in the U.S. as of 2018. Hence, this strategy can only help so much.

Furthermore, researchers such as Cowen & Company claim that legalized cannabis has depressed beer sales. This may explain why peers such as Constellation Brands and Molson Coors have made investments or formed partnerships with cannabis companies.

Still, this year, investors sold for a different reason. Temporary bar closures created concerns that consumption would fall. However, it seems that drinking has shifted to the home.

Nonetheless, InBev stock has lost approximately two-thirds of its value from its 2016 high. It has also fallen by close to 44% year to date. 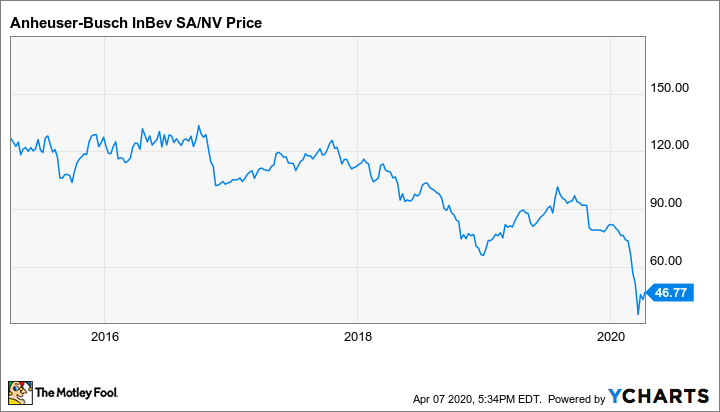 InBev stock now trades at a forward P/E ratio of about 14. That represents a massive drop from the average five-year multiple of around 41. Analysts also project average earnings growth for the next five years at 10.8% per year. This also factors in a 35.3% anticipated drop in profits this year, followed by a 36% surge in 2021.

Investors might also want to pay attention to the dividend. Since the payout is denominated in euros, the dividend will vary somewhat with exchange rates. However, it currently pays $1.77 annually, a yield of approximately 3.8%.

Moreover, due to its size, the company can face such a downturn better than craft brewers. Many of these smaller operations lack sufficient reserves to weather the COVID-related shutdowns, and some will probably not reopen. This situation places large brewers such as InBev in an ideal place to capture market share.

InBev may see only a short-term rally

However, amid shutdowns and lockdowns related to coronavirus, investors have to remember that this will not last forever. Many bars and breweries will hang on and reopen. Once that occurs, consumers will probably resume their previous drinking patterns. The profit estimates that have fallen noticeably over the last 90 days will also probably begin to move higher again once that occurs.

Although that will likely take InBev stock higher than its current levels, it does not necessarily make a case for a long-term investment. At that point, the concerns about this type of consumer staples stock will likely reemerge. Investors may again focus on falling beer consumption and voice concerns about more people preferring spirits or cannabis. As bars reopen, consumers will also again see more exposure to microbrews.

Moreover, despite the generous dividend, InBev stock does not have a history of annual increases. Even though a payout of nearly 4% is beneficial, the lack of yearly increases may dampen its appeal.

In the end, traders could get a short-term bump by buying InBev here. However, once coronavirus fades from the headlines, the problems that have helped to bring InBev stock down since 2016 will probably return.