No prizes for guessing why the state's residents were stocking up on weed.

Joining a growing list of states and even countries that have notched new all-time highs for marijuana sales, Ohio hit a new record in March. During the month, almost $13 million worth of product was sold there, according to state data analyzed by Crain's Cleveland Business. It was not apparent how much growth this represented from either the previous month, or from March 2019.

As with other geographies posting peak monthly sales in March, Ohio's new peak is due largely to stay-in-place measures imposed to mitigate the spread of the SARS-CoV-2 coronavirus. The state's sales particularly jumped in mid-month, just before those widely anticipated measures were announced. In fact, the week of March 16 took the crown for highest weekly revenue in the state's history, at $3.8 million.

This pattern implies that users were stocking up in case they were later unable to obtain product. Ohio's dispensaries, however, are still allowed to operate since the state has deemed them to be essential businesses that should remain open. 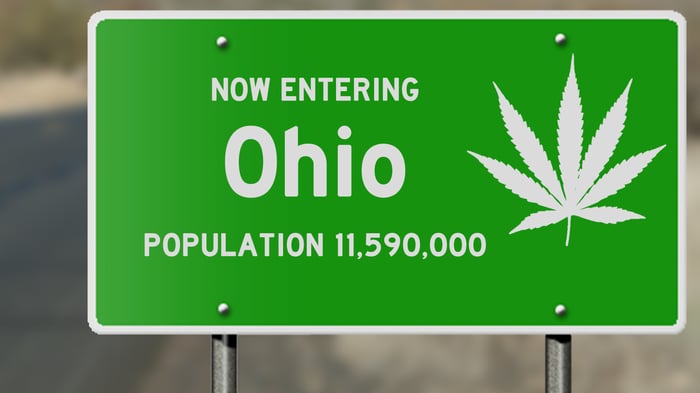 Currently, Ohio permits only the consumption and sale of medical marijuana. This is why its sales figures are routinely topped by other states, such as Oregon, that have legalized both medical and recreational cannabis.

Despite the relatively small size of its market, several publicly traded marijuana companies are active in Ohio. One is Green Thumb Industries (GTBIF -13.53%), which is based in the nearby state of Illinois. Green Thumb is well represented in Ohio, with five of its Rise dispensaries scattered within the state.

Green Thumb stock traded flat on Thursday, lagging behind the gains of the broader equities market.

Where Will Green Thumb Industries Be in 3 Years?
366%