Please ensure Javascript is enabled for purposes of website accessibility
Log In Help Join The Motley Fool
Free Article Join Over 1 Million Premium Members And Get More In-Depth Stock Guidance and Research
By Harsh Chauhan - Apr 14, 2020 at 7:20AM

These companies have bucked the economic downturn trend and look set for long-term growth.

The S&P 500 has recently started recovering some of its losses after the past six weeks of brutal stock market turmoil in the wake of the COVID-19 pandemic, but the index is still down about 15% compared to where it was at the beginning of the year.

The truth is that the stock market could head lower, as predicting a bottom in these unprecedented times is even more difficult than shooting a moving target. Still, if you have got some extra cash lying around, now may be an opportune time to start investing, as many stocks are trading at much cheaper levels than they were at the beginning of the year.

In fact, you can buy shares of three top stocks combined for less than a $500 investment that might not only deliver long-term upside but also help you beat the novel coronavirus-induced slowdown. Netflix (NFLX 1.20%), Advanced Micro Devices (AMD 2.40%), and Chewy (CHWY 1.43%) are three such stocks that together are priced under $500 at the moment. 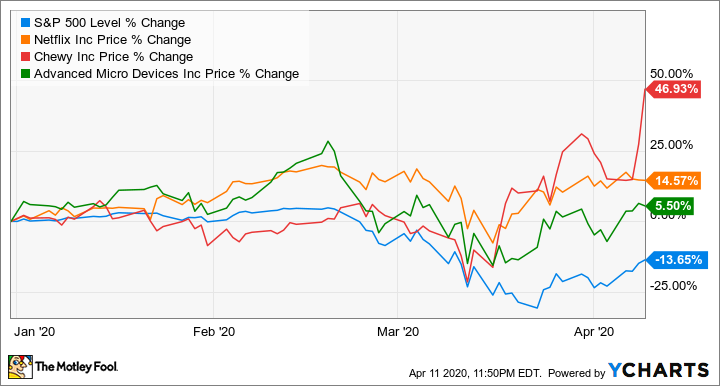 The chart above clearly shows that Netflix stock has bucked the investing trend so far in 2020. Investors have bid up the streaming giant's shares on indications that people are staying at home and adding to the company's subscriber base.

Credit Suisse supported this theory last month. The investment bank's analysis of app downloads revealed that Netflix app downloads in coronavirus geographic hotspots such as Hong Kong and South Korea have shot up remarkably. Downloads from Hong Kong have reportedly doubled since the beginning of the year, while South Korea has seen a 33% spike.

A substantial jump in Netflix app downloads has also been observed in other hotspots such as Italy and Spain. Another report suggests that the Netflix app was downloaded 59 million times in North America in the first quarter. All of this indicates that Netflix could report impressive subscriber additions when it releases its first-quarter results later this month.

More importantly, the subscribers that Netflix adds during this pandemic could stick with the company for a long time and for multiple reasons. Right now it's fair to assume that people may prefer to consume entertainment at home rather than go to public places such as movie theaters to save money as part of the broader potential economic downturn being predicted. Consuming content on Netflix turns out to be much cheaper than going to the movies. Moreover, people might be skeptical of going to public places in light of the COVID-19 outbreak, and that could be another tailwind for Netflix.

Another thing to like about Netflix stock right now is the valuation. Its price-to-earnings (P/E) ratio of 90 isn't cheap by any means. But it is lower than the five-year average of 212, while a forward P/E of 62 points toward bottom-line growth.

Keep an eye out for Netflix's quarterly results, which are due on April 21, to get a better idea about how coronavirus is impacting its business.

2. AMD has a lot going for it in these difficult times

Advanced Micro Devices' resilient stock market performance shouldn't come as a surprise. Investors seem to have solid faith in the company's prospects as it has steadily taken market share from key rivals Intel and NVIDIA.

Sales of AMD's central processing units (CPUs) are reportedly outpacing those of Intel, a trend that's likely to continue in the future thanks to its technological advantage. What's more, AMD is also winning the battle against NVIDIA in the graphics card market. The company's graphics card momentum is likely to get a nice shot in the arm in the second half of the year as new consoles by Sony and Microsoft go into production.

Sony recently stuck to its holiday 2020 launch for the upcoming PlayStation 5 console, while Microsoft is also looking at a similar timeline for the Xbox Series X. The launch of new consoles could be a big deal for AMD given the huge addressable market there.

Moreover, AMD CEO Lisa Su clarified last month that the company won't be changing its forecast for the full year, as COVID-19-related disruptions are likely to have little impact on its business. The demand for laptops and notebooks has spiked in light of the outbreak thanks to telecommuting, and AMD could take advantage of that.

NPD Group estimates that businesses bought 50% more notebooks in the last week of February. This was followed by a 50% jump in purchases in the first half of March. Additionally, laptop sales increased by 10% in the first two weeks of March.

So it won't be surprising to see AMD remain resilient during these trying times, thanks to several tailwinds outlined above.

3. Chewy zooms into the limelight

COVID-19 may have forced people to stay indoors to contain the contagion, but pets still need to eat. As the likes of Amazon are inundated with orders and delivery times get delayed by as much as a month, consumers may find it difficult to procure pet food and supplies easily. This is where Chewy comes into play -- it's an online store that caters exclusively to pets.

The online subsidiary of pet retailer PetSmart, Chewy's business is accelerating in response to the COVID-19 pandemic. The company's sales were up 35% in the fourth quarter of 2019 that ended on Feb. 2. Its outlook calls for 35% to 37% annual revenue growth for the current quarter thanks to a spike in the customer base and an increase in spending.

Chewy's active customer base swelled by 2.9 million accounts last year to 13.5 million, and its net sales per active customer went up 10% to $360. Those numbers could head further north in light of the current crisis as more people go online to procure supplies for their pets. Chewy CFO Mario Marte pointed out on the latest earnings conference call:

Beginning in late February, we saw an acceleration in sales, which has continued through today, and our first-quarter guidance reflects these trends.

As the company pulls in 70% of its sales from subscriptions, it is likely to lock in new customers that it gets during the outbreak for the long run.

The even better news for Chewy is that online pet spending in the U.S. seems to be gaining prominence. According to the American Pet Products Association (APPA), nearly three-fourths of pet owners in the U.S. have bought products online at least once in the past year. APPA estimates that sales of pet products and other services could hit $100 billion in the U.S. this year. So Chewy has a large addressable market to play with as more people resort to buying pet products online.

The momentum that Chewy gains during these difficult times could be sustained in the long run, as online spending on pet products is expected to grow at double-digit rates for the next five years.