Please ensure Javascript is enabled for purposes of website accessibility
Log In Help Join The Motley Fool
Free Article Join Over 1 Million Premium Members And Get More In-Depth Stock Guidance and Research
By Chad Henage - Updated Apr 14, 2020 at 11:07AM

ViacomCBS is cheap, has a huge yield, and seems to be a dark horse in the streaming wars. Long-term investors should use this opportunity to add to their positions.

When most people think of streaming services, the first name that pops to mind probably isn't ViacomCBS (NASDAQ: VIAC). However, this lack of attention gives investors a chance to snap up this dark horse in the streaming race at a bargain price. As Netflix and Walt Disney get most of the press and attention, ViacomCBS quietly builds a diversified portfolio of original programming. When a stock with strong fundamentals, a cheap valuation, and a yield of nearly 6% are available, investors should stand up and pay attention.

It's no secret that video streaming has been on the rise and the worldwide coronavirus epidemic is forcing millions to say at home. This is leading to an explosion of consumers looking for the next show to binge-watch. It's a strange phenomenon occurring in the streaming industry: Just as more streaming options become available, the globe is faced with a pandemic forcing people to stay inside.

Companies like Netflix that used to gauge their catalog by the breadth of shows and movies now hope to draw viewers based on their original content. Netflix CFO Spencer Neumann said, "We've moved a long way in this business-model transition from what was once an all-licensed-content business to now ... well over 50% of our cash spent is on originals, the future of our business is mostly originals." 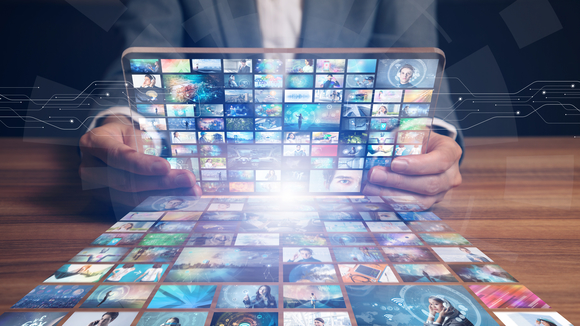 At CBS, CEO Bob Bakish touted the company's extensive library  of "more than 140,000 television episodes and 3,600 film titles." Prior to shutting down production of multiple shows due to coronavirus concerns, CBS had 79 shows ordered or in production, which represented an increase of more than 20% compared to last year. While Netflix attempts to shift its efforts toward original content, CBS is already largely there.

Of course, CBS and Viacom's recent merger presents some short-term challenges. The stock's recent decline was connected in part to the company's challenging earnings report. As the combined company looks to achieve cost savings, and generate better earnings, investors selling at these levels are likely missing the long-term potential that ViacomCBS offers.

What would investors be buying?

Though some investors think of ViacomCBS as a traditional television channel and film studio, they are missing the rise of the company's streaming business. The diverse options from free and ad-supported, to a mainstream offering, to a premium channel, gives ViacomCBS a chance to acquire subscribers at all ends of the spectrum.

This is a key differentiating factor between Netflix and ViacomCBS. Netflix is the same service offered at multiple price points for standard definition up to high-definition streams. In some parts of the world, Netflix offers a mobile-only plan, yet users are essentially paying for the same service. Where ViacomCBS is concerned, the company offers basically four unique services for different audiences.

The fourth service could be the most significant threat to Netflix in the end. Today, CBS All Access is a relatively cheap option priced at $5.99 per month  with limited commercials. At a price more than 50% below Netflix's most popular plan, this service gives users access to CBS' traditional programming, plus exclusives like Star Trek: Picard and more. In addition, users get access to live sports.

At first, it seems like CBS All Access couldn't possibly compete against the broad catalog that Netflix offers. However, Bakish has other plans: "To complete our portfolio, we will take CBS All Access and expand it to be a robust and compelling offering to service the broad pay streaming segment." In short, the existing CBS All Access service will gain content from Nickelodeon, Comedy Central, MTV, BET, and Smithsonian. On top of this new content, films from the Paramount library will be added, as well as new original series in development. ViacomCBS expects this "family of brands" offering to ultimately scale to 30,000 episodes of TV and as many as 1,000 movies. The cost of this new service isn't known, yet to compete with Netflix it would need to be priced at a similar value.

From Pluto TV to CBS All Access family of brands, ViacomCBS seems to have something for everyone. What the company also has is the cash flow to support these efforts.

For those worried about closed movie theaters, last quarter the company's theatrical revenue equaled just under 2% of total revenue. It's true that advertising makes up the bulk of the company's revenue, yet the company's consistent high-quality content should continue to attract ad dollars. When people are stuck at home, it's likely they are going to watch more video. Whether that means Pluto TV, the traditional CBS, Showtime, or CBS All Access, the company should be able to grow its audience. As the public health crisis eventually fades, the returning ad dollars, combined with a bigger audience, should serve investors and the company well.

As proof that streaming seems to be the future of ViacomCBS, the company's subscription and video advertising business is expected to grow by 35% to 40% this year. By point of comparison, Netflix grew total revenue by more than 30% annually last quarter. Beneath the surface, ViacomCBS has multiple offerings driving its streaming business. The company's Pluto TV service increased its monthly active users in the U.S. by 75% annually. Paid streaming subscriptions increased by 50% year over year domestically. On the flip side, Netflix is witnessing a split in its membership growth. On the domestic side of the house, Netflix's paid memberships increased by a pedestrian 4.4% annually. International has become the company's growth engine, with paid memberships increasing by more than 31% year over year.

Though both ViacomCBS and Netflix are reporting solid growth in subscribers, the former generates significant free cash flow. In the past 12 months, ViacomCBS generated core free cash flow (FCF) of over $3.4 billion. Core FCF differs a bit from the standard formula (cash from operations minus capital expenditures) in that I strip out some of the non-cash accounting adjustments that otherwise muddy the cash flow statement. In ViacomCBS' case, I used net income ($3.3 billion) plus depreciation ($443 million) and subtracted capital expenditures ($353 million). Looking at Netflix, the company said it "currently forecasts FCF of approximately negative $2.5 billion." While Netflix hopes to move slowly toward positive FCF, it hasn't set an exact timeframe. What's more, ViacomCBS used just under 17% of its core FCF for dividends.

The coronavirus may challenge ViacomCBS' short-term results and cause volatility. However, with a yield of nearly 6% an almost comically low payout ratio, and a growing streaming business, this represents a compelling buying opportunity for long-term investors.