Please ensure Javascript is enabled for purposes of website accessibility
Log In Help Join The Motley Fool
Free Article Join Over 1 Million Premium Members And Get More In-Depth Stock Guidance and Research
By John Rosevear – Apr 16, 2020 at 11:11AM

The automaker said that its sales were recovering in March.

Ford Motor (F -3.60%) said that its sales in China fell to 88,770 vehicles in the first quarter, down 34.9% from a year ago, as the COVID-19 outbreak clobbered demand in the world's largest new-vehicle market.

But Ford said that with the outbreak subsiding, its dealers in China have resumed operations. Its sales in March were at about 75% of year-ago levels, it said.

The automaker fared slightly better than the overall industry. Sales of passenger vehicles and commercial vehicles in China fell a combined 42.4% in the first quarter from the prior-year period, according to data from the China Association of Automobile Manufacturers (CAAM). 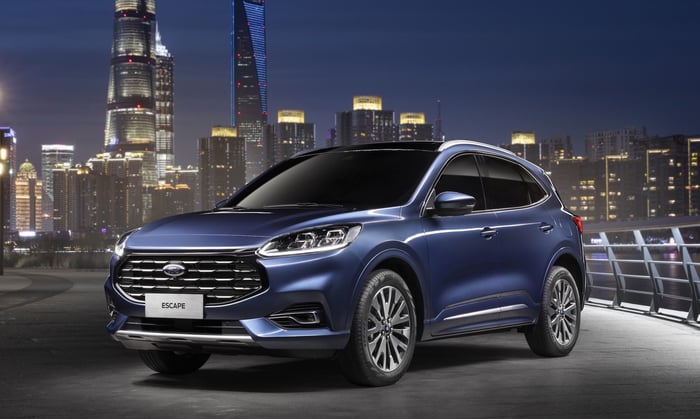 Ford said that early demand for its all-new Escape has been strong in China. Image source: Ford Motor Company.

Most of the vehicles that Ford sells in China are made locally. It makes Ford- and Lincoln-brand cars and SUVs in a joint venture with Chinese automaker Changan Motors, and trucks and commercial vehicles under the Ford and JMC brands in a second joint venture with truck manufacturer Jiangling Motors.

Sales of Ford-brand vehicles fell 29% in the quarter, a good result under the circumstances. That result was helped by demand for Ford Transit commercial vans, many of which were put into service as ambulances during the peak of the pandemic.

Early orders for the new Ford Escape and Lincoln Corsair SUVs, both of which are being made locally in China, were also strong, the company said.

Ford has been trying to revive sales growth in China after a slump that began in the second half of 2017. Ford's sales in China, once a bright spot for the company, fell 37% in 2018 and 26% last year.