Talk about a bitter irony. For the first time in years the personal computer industry saw a surge in demand, thanks to millions of people suddenly forced to work away from their offices. But the same coronavirus that has them stuck at home has also shut down the industry's supply and distribution chains. Net result? PC sales slumped last quarter -- by a lot.

It's not necessarily the end of the world. Once the dust settles, names like Dell Technologies, HP, and Apple are expected to find a fairly robust work-at-home market waiting for them. Unfortunately, making those provisions for the future is still apt to be a one-off wave in buying.

Two rivals agree on one thing

Technology market research outfits IDC and Gartner separately crunched the numbers but came to the same basic conclusions. IDC reckons personal computer sales -- which include laptops and notebooks -- fell 9.8% during the first quarter, while Gartner's math pegs the figure at a similar 12.3% decline. 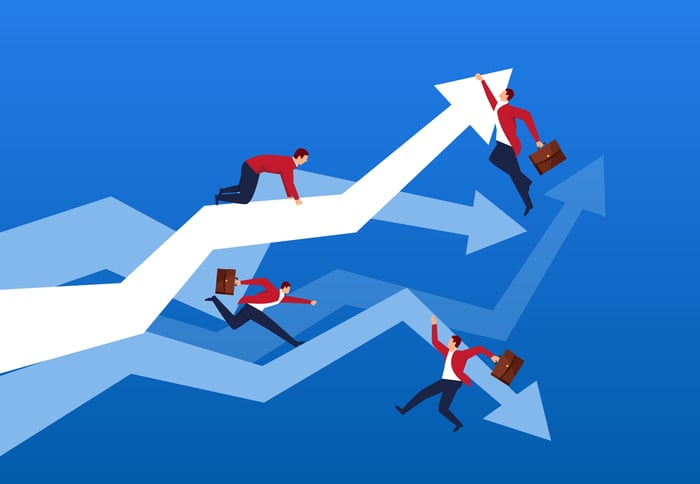 Both named the same culprit, too. The COVID-19 pandemic that first took hold in China late last year and finally rattled North America beginning in late February has spurred shutdowns of all sorts -- factories, offices, and retail, just to name a few.

The detailed vendor breakdowns from each research house also aligned quite well, with both noting Dell's likely increase in unit shipments, and with both research outfits suggesting Apple and HP were hit harder than most.

Although none of the listed companies is entirely dependent on PC sales for revenue, the data suggests all of these names could be poised to report disappointing quarterly results in the near future. No surprises there. It's what may (or may not) happen later this year that will keep investors on edge for the remainder of 2019.

Both Gartner and IDC agreed that how work is done in the future could be forever altered once the coronavirus contagion is in the rearview mirror. IDC's Devices and Displays research vice president Linn Huang commented:

Businesses that once primarily kept their users on campus will have to invest in remote infrastructure, at the very least, for continuity purposes. Consumers stuck at home have had to come to terms with how important it is to keep tech up to date. This should provide a steady, long-range tailwind for PC and monitor markets, among other categories.

Gartner's research director Mikako Kitagawa said, "Once coronavirus-related lockdowns expanded to other regions, there were new, sudden pockets of PC demand for remote workers and online classrooms that PC manufacturers could not keep up with."

It was something else Kitagawa suggested that throws cold water on the budding optimism surrounding the personal computer market, however. She went on to explain:

This quarter's vendor results underscore the growing economic uncertainties that are tightening PC spending, especially among small and midsize businesses. This uncertainty, coupled with the end of the Windows 10 upgrade peak, is causing enterprises to shift their IT budgets away from PCs and toward strategic business continuity planning. We will start seeing enterprises and consumers alike extending their PC life cycles on a more permanent basis as they focus on preserving cash."

She's right. Many companies will likely make sure they're never caught unable to get work done remotely again. But once that safety net is put in place with adequate computers stationed at key employees' homes, there's no real encore for the PC industry.

You may recall personal computer sales struggled to muster measurable growth last year even with the looming end of support for Windows 7. Kitagawa expressed concern with Gartner's 2019 PC market analysis that -- without any major PC performance innovations -- older computers now running Windows 10 have several more years of useful life ahead. Any new computer purchases coming out of the coronavirus slowdown may be the proverbial "last hurrah" for what was a relatively feeble PC sales/upgrade cycle.

The stage is set for impressive PC sales in Q2 and likely into Q3, depending on when the industry and its suppliers can get back to work, and how quickly they can work once they do. Once the world is equipped for the next unknown that keeps employees at home rather than in the actual workplace though, there's not a whole lot left to buy. In fact, it stands to reason that spending on work-at-home technology may be counted as overdue upgrades of existing personal computers.

That scenario once again makes it difficult to see personal computer brands as compelling long-term investments.