Optimism about a coronavirus treatment is lifting the most vulnerable stocks.

The stock market is looking to close out the week on a high note, with the Dow Jones Industrial Average and S&P 500 index up by 1.7% and 1.5%, respectively, as of 11:45 EDT. However, credit card stocks are performing much better.

Credit card payment processors and lenders American Express (AXP 0.98%) and Discover (DFS 0.72%) were higher by 5% and 9%, respectively. And credit card-focused banking institution Capital One (COF 1.74%) was up by about 8% for the day. Financial stocks, especially those with high credit card lending exposure, have been hit especially hard in the coronavirus market downturn, so it's not a surprise that they rebound strongly when there are signs of positive news. 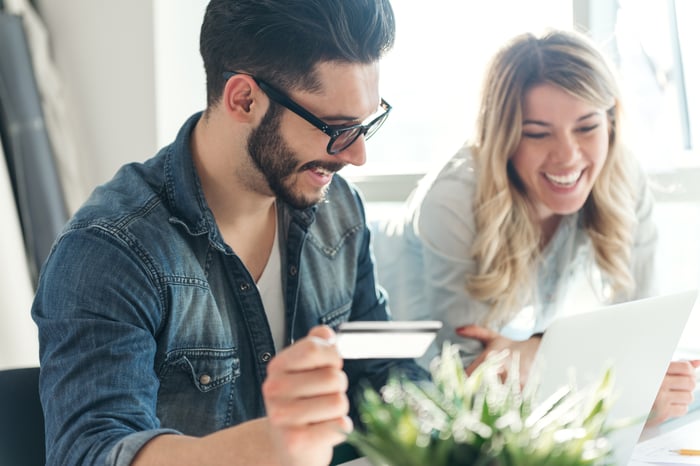 There isn't any company-specific news lifting these credit card lenders higher. Instead, the big news story of the day is that Gilead Sciences' (NASDAQ: GILD) remdesivir antiviral drug is showing tangible signs of effectiveness against serious cases of COVID-19. While this is just preliminary data and not a conclusive result from a completed trial, an effective treatment against the virus could be a game changer when it comes to returning the U.S. economy to normal.

Here's the point. Credit card loans are of significantly lower quality than other types of debt, in terms of defaults. Consider this statistic -- American Express' charge-off rate in the fourth quarter of 2019 was 2.3%. Discover's was about 3.2% for 2019. Meanwhile, Wells Fargo (NYSE: WFC) (which has a diverse mix of loan types) had a net charge-off rate of just 0.38% in the fourth quarter. To be sure, because of the high interest rates associated with credit card debt, this can still be a very profitable business -- but the takeaway is that higher-than-average default rates come with the territory.

When recessions hit, default rates tend to spike, as consumers have trouble paying their bills. And the surge in defaults generally hits lower-quality debts the hardest. In a long economic shutdown, credit card lenders could see a massive rise in defaults. Specifically, credit card delinquency rates tend to rise and fall with the unemployment rate, and it is no secret that unemployment is surging right now. Consider that the credit card delinquency rate peaked at 10.7% in early 2010 in the wake of the financial crisis, and compare that with the current figures in the last paragraph. It's not difficult to see why recessions are dangerous for the credit card industry.

On the other hand, if the shutdowns end sooner than expected, it could mean that defaults aren't set to rise nearly as much as feared. And that's what we're seeing reflected in these stocks today.

To be perfectly clear, we're a long way from anything resembling a normal U.S. economy, and we won't likely hear any conclusive results from Gilead for at least another week or two. However, signs that something is showing promise as an effective treatment is enough to fuel investors' optimism that maybe we can start reopening the economy sooner rather than later. And that's what we're seeing reflected in these credit card stocks today.