Please ensure Javascript is enabled for purposes of website accessibility
Log In Help Join The Motley Fool
Free Article Join Over 1 Million Premium Members And Get More In-Depth Stock Guidance and Research
By Matthew Frankel, CFP® – Apr 17, 2020 at 11:46AM

Despite an otherwise ugly week, the big banks were one of the best-performing parts of the market today.

The stock market had an extremely strong opening on Friday, but the rally had started to lose steam by late morning. At 11 a.m. EDT today, the Dow Jones Industrial Average and S&P 500 index were both higher by about 1.6%.

Bank stocks reported first-quarter results this week and had been one of the worst-performing sectors in the market, but are reversing course somewhat today. All of the big banks are handily outperforming the overall stock market. Citigroup (C -1.78%) is the top performer of the megabanks, up nearly 7% for the day. JPMorgan Chase (JPM -2.04%) is up by about 6%, and Wells Fargo (WFC -2.47%) is higher by more than 4%. 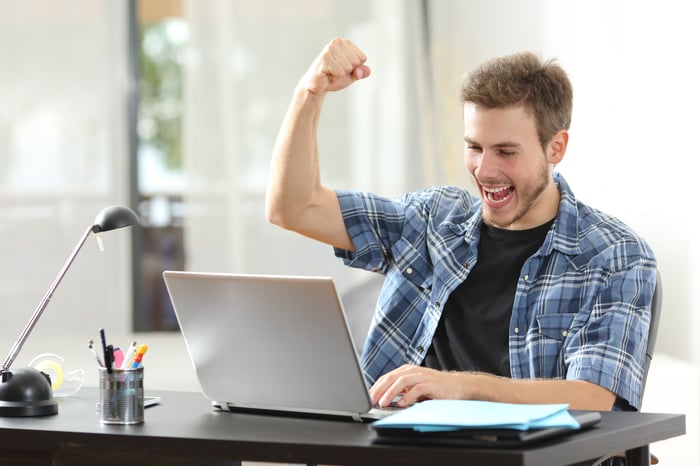 Investors are cheering the latest developments in the fight against the coronavirus pandemic. Image source: Getty Images.

First, keep in mind that the bank stocks have been awful performers this week. Through Thursday, these banks had declined by 14% to 19% this week alone. So, keep today's performance in perspective: The banks are still significantly lower than they were at this time a week ago.

The reason for the recent poor performance is that all of the big banks revealed that they set aside billions in additional loan loss reserves in the first quarter, indicating that they're anticipating a wave of defaults throughout the COVID-19 pandemic.

Well, there were a couple of good news items last night that are encouraging signs the economic shutdown might not last as long as feared. First, we learned that Gilead Sciences' (GILD -0.76%) antiviral medication remdesivir is showing signs of effectiveness at treating severe cases of COVID-19. A truly effective treatment against the virus could be a game changer, and while it's certainly too early to call the drug a success (these are just initial results, not a complete trial), this is a promising development.

The point is that if the economy reopens sooner rather than later, it could mean that loan defaults aren't going to get as bad as the banks' reserve builds are suggesting. Think of it this way: Average U.S. consumers are less likely to fall behind on their monthly debt obligations if they can get back to work in May rather than June or July. And that seems to be the hope reflected in the stock market today.

To be clear, we're a long way from being out of the woods. People are still getting sick and dying from the coronavirus at an alarming rate, and the peak isn't expected in many parts of the U.S. for several weeks. But any news that shows the end is in sight is likely to be perceived as a positive sign by investors, and since the banking industry is highly sensitive to recessions, we're seeing that reflected in bank stocks today.