The launch would be a huge milestone for the relatively young company.

Elon Musk's SpaceX will transport American astronauts to the International Space Station on May 27, the first NASA astronaut launch from American soil since 2011, the U.S. space agency announced Friday.

SpaceX and Boeing have been racing to provide the first U.S. astronaut lift since NASA retired the Space Shuttle nearly a decade ago. SpaceX's Crew Dragon spacecraft has been moving toward capturing the honor for some time now, but the announcement is still a remarkable accomplishment for the relatively young company. 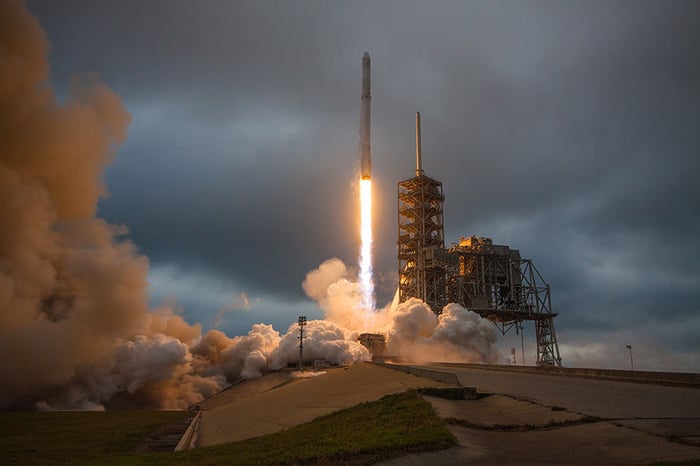 NASA Administrator Jim Bridenstine tweeted the launch date on Friday, saying that astronauts Bob Behnken and Doug Hurley will fly to the Space Station atop SpaceX's Falcon 9 rocket. The launch is scheduled to occur at NASA's Kennedy Space Center in Florida.

BREAKING: On May 27, @NASA will once again launch American astronauts on American rockets from American soil! With our @SpaceX partners, @Astro_Doug and @AstroBehnken will launch to the @Space_Station on the #CrewDragon spacecraft atop a Falcon 9 rocket. Let's #LaunchAmerica 🇺🇸 pic.twitter.com/RINb3mfRWI

The mission is a huge milestone in Musk's efforts to increase the exploration of space and a step toward the Tesla CEO's stated goal of populating other planets. That's still a long way off, but successful Crew Dragon NASA missions would establish the company as a leader in the industry and a rival to traditional defense contractor vendors like Boeing -- as well as provide much-needed funding for SpaceX.

Even though the Crew Dragon seems likely to transport crew first, the setback isn't a total loss for Boeing's defense and space unit. NASA committed more than $6 billion to develop the Crew Dragon and Boeing's Starliner, and the agency appears to favor having two separate contractors to bid on future missions.