Please ensure Javascript is enabled for purposes of website accessibility
Log In Help Join The Motley Fool
Free Article Join Over 1 Million Premium Members And Get More In-Depth Stock Guidance and Research
By George Budwell – Apr 18, 2020 at 7:45AM

Akebia Therapeutics and Satsuma Pharmaceuticals could both be big winners for early shareholders.

Generally speaking, small-cap growth stocks probably aren't the first place you'd look to invest in during a particularly turbulent market. Underscoring this point, small caps were hit far harder than their mid- and large-cap peers during the height of the COVID-19-induced sell-off in March.

However, the exceedingly sharp pullback among companies with market caps of less than $1 billion last month may have created some stellar buying opportunities for aggressive investors. Small-cap stocks have the best chance of posting the highest gains when the market goes into full-on recovery mode, after all.

Which small-cap growth stocks are the most compelling buys right now? If you have a high tolerance for risk and are on the hunt for super-charged growth opportunities, the little-known biotechs Akebia Therapeutics, Inc. (AKBA -3.78%) and Satsuma Pharmaceuticals, Inc. (STSA -4.24%) should definitely be on your radar this month. Wall Street, in fact, thinks both of these stocks could double in value over the next 12 months. Here's why. 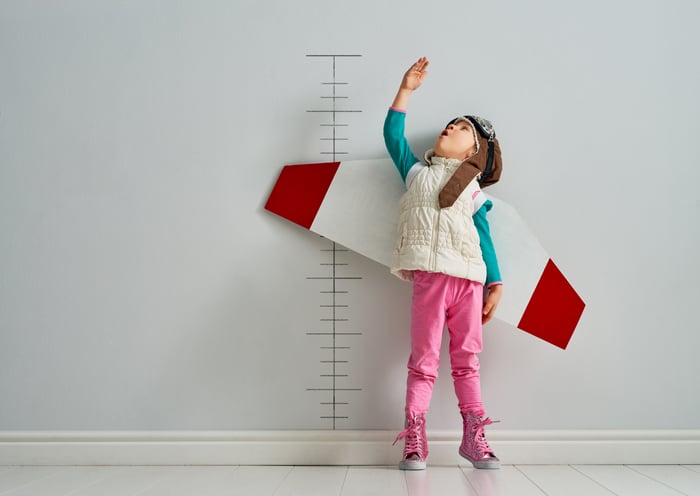 Akebia is a kidney disease specialist. The company currently sells one drug called Auryxia, which is indicated for two conditions associated with chronic kidney disease (CKD). Auryxia's sales have started to gain momentum in recent quarters, but the drug doesn't appear to have even a slim chance of living up to its blockbuster aspirations at this stage of the game. In the most recent quarter, for instance, the drug raked in just $28.9 million in net sales.

Fortunately, Akebia does have another major value driver in the works. Before the midway point of 2020, the company is slated to roll out late-stage data for vadadustat, a drug indicated for dialysis and non-dialysis patients with anemia due to CKD. Akebia's goal is to have vadadustat become the new standard of care for these high-value indications.

As part of this effort, the company is working on obtaining a Priority Review Voucher from the Food and Drug Administration (FDA) to expedite the drug's regulatory review. The big picture is that Akebia's shares should easily double if vadadustat hits the mark in its late-stage program.

Nonetheless, this promising small-cap biotech stock has a significant amount of downside risk. Apart from the risk associated with clinical trials, in general, Akebia was never able to truly deliver on Auryxia's once-hefty value proposition, and the company seems destined to take advantage of any spike in its share price to raise additional funds. Therefore, investors should carefully weigh the biotech's sizable upside potential against its various risk factors before buying shares.

Satsuma: The moment of truth is near

Satsuma is a clinical-stage biotech racing toward the finish line for its experimental acute migraine treatment called STS101. This is a drug-device combination consisting of a dry powder formulation of dihydroergotamine mesylate and a pre-filled, single-use nasal-delivery device.

Despite the headache of conducting a pivotal trial during a global pandemic, Satsuma still expects to announce STS101's top-line results sometime in the second half of 2020. As a result, the company could make the leap from a developmental biotech into a commercial-stage entity by perhaps mid-to-late 2022.

What's the big deal? The acute migraine market is forecast to grow into an $8 billion space by 2025. What's more, STS101 is a well-differentiated product that could quickly grab a significant share of this vast market. Satsuma would be up against several of the biggest names in the pharmaceutical industry, but even a small slice of pie should prove to be a huge catalyst for this company. Satsuma, after all, only has a market cap of $305 million right now.

Another important issue to consider is Satsuma's value as a buyout candidate. The acute migraine drug market has proven to be extremely competitive over the last few years. Thus, any company with a new migraine drug or drug-device combo might quickly morph into a top takeover target.

That being said, Satsuma's near-term fate is closely tied to the prospects of its lead clinical candidate. In other words, any missteps on this front would likely spell disaster for the company's share price. Despite the biotech's noteworthy upside, investors would be wise to keep its fairly significant downside potential firmly in mind.