Please ensure Javascript is enabled for purposes of website accessibility
Log In Help Join The Motley Fool
Free Article Join Over 1 Million Premium Members And Get More In-Depth Stock Guidance and Research
By James Brumley - Updated Apr 21, 2020 at 6:01AM

The limited-time menu item may serve as a gauge of interest as Chinese consumers embrace a meat-free diet.

The meatless-meat craze fueled by companies such as Beyond Meat (BYND 0.08%) and Impossible Foods isn't just a North American phenomenon: Consumers around the world are increasingly interested in the option. That's why Yum China Holdings (YUMC -0.41%) -- parent to China's Taco Bells, KFC's, Pizza Huts, and other quick-service restaurant names -- are testing the alternative food source later this month. The company posted on its Weibo page on Monday that three of its stores in China would be selling vegan fried chicken for a three-day stretch in the middle of next week. Yum China didn't say whether this was a precursor to a wider, permanent rollout of the product, although that's possible.

China currently accounts for about one-fourth of the world's meat consumption, but that's changing. Its plant-based meat market grew to $9.7 billion in 2018, according to data from Euromonitor, which further predicts the country's demand for vegan meat options will reach $11.9 billion by 2023. That's a key reason Beyond Meat and Impossible Foods have both prioritized penetrating this market. 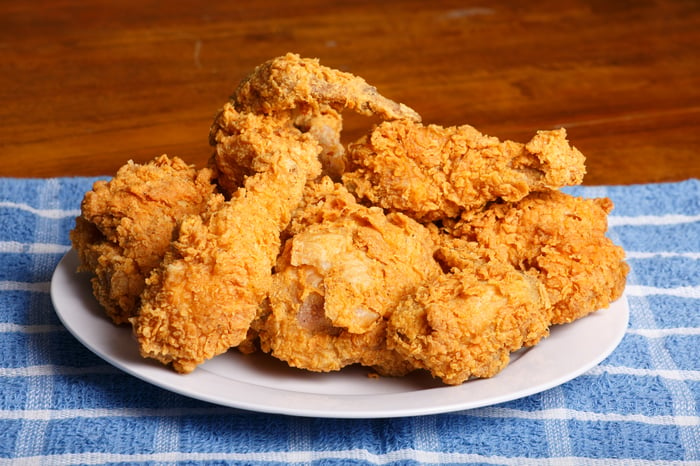 Yum China's North American counterpoint, Yum! Brands (YUM 0.38%), also introduced plant-based fried chicken at one store in Atlanta in September, and in January it announced that vegan chicken nuggets were being made available to consumers in two markets. Yum!'s Taco Bell is also considering an alternative to real meat.

The new meatless chicken products China's KFCs are testing will be supplied through a partnership with Beyond Meat. Yum China's plant-based chicken, however, is being supplied by U.S.-based company Cargill.