Please ensure Javascript is enabled for purposes of website accessibility
Log In Help Join The Motley Fool
Free Article Join Over 1 Million Premium Members And Get More In-Depth Stock Guidance and Research
By John Bromels – Apr 22, 2020 at 7:18AM

Crashing share prices have left them with big dividends...for now.

Double-digit yielders -- that is, stocks with dividends that yield 10% or more -- are hard to find, and even harder to keep. That's because unless a company is a REIT or some other high-yield-friendly investment type, a big dividend yield often doesn't stick around for long.

Thanks to the market's big March crash, quite a few stocks have seen their yields jump above 10%. You might be tempted to grab those big payouts now, but beware! If it's an unsustainably high dividend that gets cut, you not only lose out on the yield, but you'll probably also see your initial investment lose value as other, quicker investors dump the stock. 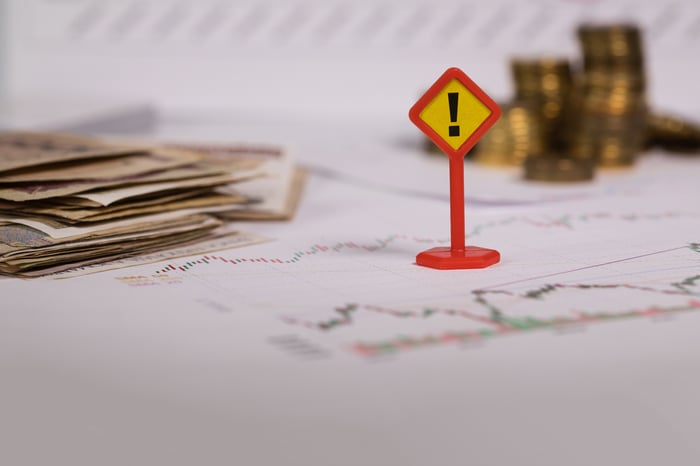 No, that isn't a typo. Pipeline master limited partnership (MLP) Western Midstream Partners' current quarterly distribution (the MLP version of a dividend) is $0.622. Meanwhile, its unit price (MLP-speak for "share price") has fallen below $5.50. That results in a roughly 45% yield, which is unbelievably high, even in the high-yielding world of energy pipeline MLPs.

While the prospect of nearly doubling your initial investment in just two years may seem tempting, it's worth noting that Western's largest customer is the troubled Occidental Petroleum. Occidental recently slashed its overall 2020 production estimates by 6%. The vast majority of those cuts are likely to come from the Permian Basin as opposed to overseas, which could translate to an 18% U.S. production cut. That's oil that won't be flowing through Western Midstream's pipeline network, which could hit its bottom line hard.

For its part, Western Midstream hasn't put out a single press release or statement since February, which should make investors nervous. This yield looks shaky at best.

A lot of companies that have been severely impacted by the coronavirus have already cut or suspended their double-digit-yielding dividends, including major retailers like Macy's and oil producers like Murphy Oil. Many of those haven't seemed likely to weather the current economic conditions for the time being. However, some top yielders may not be at risk from COVID-19, but have risky payouts for other reasons.

This includes 17.3%-yielding propane distributor Suburban Propane Partners, another MLP. As a distributor of propane and heating oil, Suburban isn't directly affected by falling oil and gas prices -- its customers pay the going rate for the product; Suburban just delivers it and collects a fee.

Unfortunately for Suburban, the trend of warmer winters has caused demand for propane -- which is primarily used as a heating fuel -- to plummet. Net income has been lumpy, but is down 44.9% over the last five years, and free cash flow has declined by 35.2%. Suburban already cut its distribution by 31.8% in 2017, and with a debt load that's already 5.4 times its earnings before interest, taxes, depreciation, and amortication (EBITDA), another cut might be just one warm winter away. 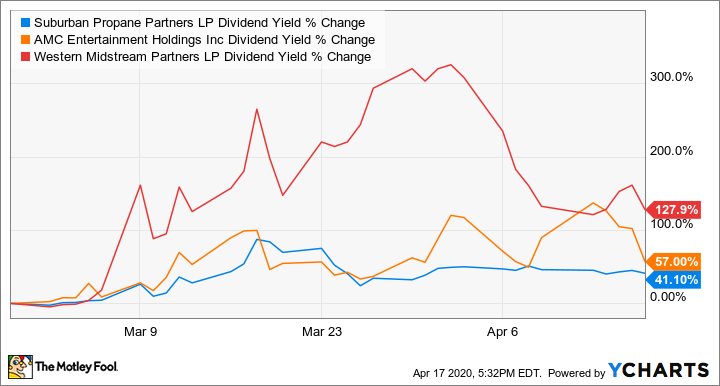 Investors might be excited to see that movie theater operator AMC Entertainment Holdings is still sporting a dividend yield of 19.6%, even as investors are bidding up AMC's shares. The company, which has suspended all of its operations due to the coronavirus outbreak, announced on April 17 that it expects to be able to hang on through a partial opening of its theaters in July.

While that yield may be technically accurate, in all probability, it's gone. In its announcement, management mentioned that "the Company does not expect to continue dividend payments." That's technically not an official suspension, which would require a vote from the company's board. Still, with an announcement like that, it's all but certain that AMC's dividend is toast. However, without an official dividend cut or suspension, many dividend calculators will still quote you the double-digit yield. Don't be fooled.

Double-digit yields (usually those in the very low double digits) aren't always a bad thing. Some well-respected MLPs, REITs, and asset management companies regularly yield more than 10% and have for years. However, when a company's yield shoots up quickly, as in the case of Western Midstream Partners, Suburban Propane Partners, and AMC Entertainment Holdings, that's when it's time to proceed with extra caution.

There are plenty of reliable dividend stocks with high-single-digit yields that investors can turn to. These three are best left alone.