The U.S. Energy Information Administration (EIA) released its weekly petroleum status report on April 22, and the numbers show that consumption of refined products has collapsed and oil producers have been slow to respond with corresponding production cuts, causing oil prices to fall sharply and even enter into negative pricing as traders look to unload oil they can't find storage for.

As of April 17, U.S. commercial crude oil inventories increased 15 million barrels from the previous week to 518.6 million barrels, according to the report. That's 9% higher than the five-year average, and has put the U.S. within striking distance of setting a record for most oil ever in commercial storage. The record of 532 million barrels was set in early 2017. 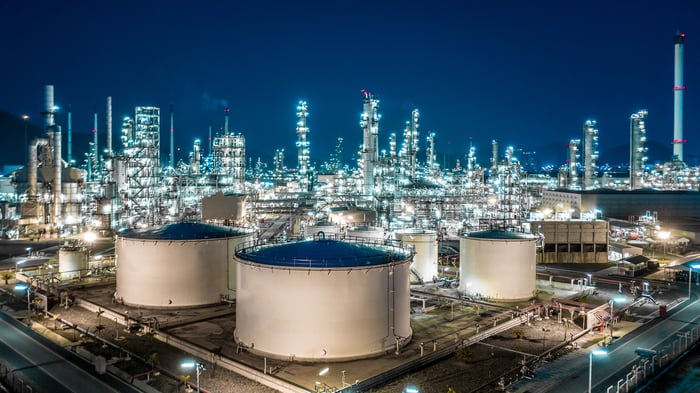 The biggest reason behind the surge in oil inventories is the record levels of demand destruction for refined products under the COVID-19 pandemic that's sent much of the world into recession. According to the EIA report, gasoline and jet fuel supplied fell 41% and 54% year-over-year, while distillate supplied fell 10%.

Over the past month, more than 22 million Americans have filed for unemployment, and many millions more are expected to lose their jobs in the weeks ahead as more companies are forced to cut costs while so many businesses remain shuttered.

Oil stocks have taken it on the chin. Even as other sectors have recovered, the Energy Select Sector SPDR ETF (XLE 0.27%) is still down more than 45% year to date.

Oil producers have not been able to cut supply at anything close to the levels that demand has fallen. The landmark deal reached by global oil powers to reduce production by 10 million barrels per day won't kick in until May 1, while global oil demand is off by 30 million or more barrels per day. This massive imbalance is quickly filling up every type of oil storage including tanker ships that normally transport oil.

The EIA report above, it should be noted, doesn't include every type of storage. It excludes the U.S. strategic petroleum reserve, which is expected to buy 75 million barrels of crude that would normally go into commercial storage, and also excludes unconventional storage like tanker ships that are classified as transportation, not storage.

As a result, the actual oil oversupply environment is really worse than the EIA report shows, creating an environment that will take many months to work through. This is expected to further delay the benefits of an economic recovery for many oil companies.