Please ensure Javascript is enabled for purposes of website accessibility
Log In Help Join The Motley Fool
Free Article Join Over 1 Million Premium Members And Get More In-Depth Stock Guidance and Research
By Lou Whiteman - Apr 23, 2020 at 7:22AM

On April 17, the U.S. Air Force ended the competition to develop a new Long-Range Standoff Weapon (LRSO) nearly two years early, declaring Raytheon Technologies (RTX -0.29%) the winner of a contract expected to be worth as much as $10 billion if the program is fully developed.

In August 2017, the Air Force awarded what was then Raytheon and Lockheed Martin (LMT -0.27%) separate $900 million contracts to continue work on the LRSO, an air-launched cruise missile designed for both nuclear and conventional attacks. The companies were supposed to spend four-plus years continuing its development, with the Air Force not expected to down-select to a final vendor until fiscal 2022.

The award is a nice prize for Raytheon Technologies, which was formed just this month when defense contractor Raytheon merged with the aerospace arm of United Technologies. It also raises questions about why the announcement came when it did, and what it means for the program. 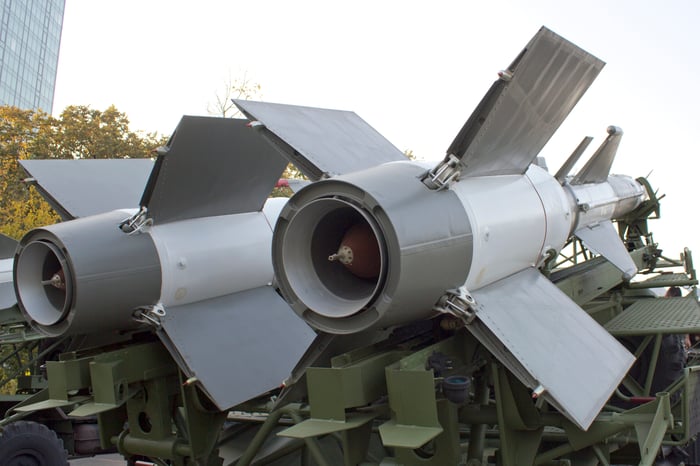 The LRSO program was launched to replace the AGM-86, a subsonic air-launched cruise missile developed by Boeing in the late 1970s. The missile is to be the air-launch portion of the nation's nuclear triad, the three-legged stool that is the foundation of the U.S.'s nuclear deterrent strategy.

The exact program size is currently unknown, but the Air Force is expected to spend $2 billion on research and development of the LRSO between now and 2024, followed by a bulk order of as many as 1,000 missiles. If the Pentagon eventually buys a conventional, non-nuclear version of the missile as well, as has been discussed, the program size could grow much larger.

The LSRO is one of the premier missile contracts out for bid, and it appears Raytheon Technologies will be the one reaping most of the revenue from the program from this point forward. In a statement announcing the decision, the Air Force said that after "extensive evaluation of contractor programmatic and technical approach," it had "decided to focus on Raytheon's design."

But not all is lost for Lockheed Martin. Elizabeth Thorn, the LRSO system program manager for the Air Force's Nuclear Weapons Center, said in a statement that it was not a typical down-select that comes at the end of a competition. "Instead, we are reframing our relationship with Lockheed Martin to focus on specific technology maturation we believe either has future applicability for the final LRSO design or will reduce overall program risk," Thorn said.

It's hard to know exactly what the Air Force intends to do. The government could plan to buy up some of Lockheed Martin's intellectual property from its development stage to apply to the Raytheon design, including sensor technology, or it could be trying to make Lockheed Martin a subcontractor on Raytheon's future efforts. Rival contractors often team up for particular awards, and in some cases form alliances after the government selects one party over the other.

So what really happened?

The vague statement about Lockheed Martin's ongoing role in the effort is not the only oddity about this announcement. The LRSO is a major part of the Pentagon's $500 billion effort to refresh the nuclear triad, and major nuclear awards are usually trumpeted by the companies involved and the government instead of hidden away on a Friday night.

In its statement announcing the decision, Raytheon noted that it expects to complete the current phase of the LRSO development on schedule by January 2022, with negotiations on a final engineering and manufacturing contract not expected to begin until fiscal 2021.

It's possible that Lockheed Martin's entry simply didn't perform to plan in the preliminary design review phase, and that the government is moving forward with the design that did pass. It is also possible -- and I think more likely -- that the Air Force, which has billions in unfunded or underfunded priorities, is seeking to cut costs by picking a winning design early and eliminating redundant development funding.

A good win for Raytheon

Whatever the reason for this decision, Raytheon Technologies is the clear beneficiary.

The award comes at an opportune time for the newly formed company, as its commercial aerospace business is expected to come under significant pressure in the quarters to come as airlines retrench due to the COVID-19 pandemic.

Raytheon and United Technologies' argument for combining was that together they have more revenue diversity, blending a steady-as-you-go defense business with the boom/bust cycle of commercial aerospace. In short, United Technologies merged with Raytheon exactly for contract wins like the LRSO.

Raytheon Technologies has a tough challenge ahead, with managers forced to integrate a massive acquisition while navigating through a potential recession and probable weakness in its massive commercial arm. But for investors willing to ride whatever near-term turbulence is on the horizon, awards like the LRSO are part of the long-term bull case for the newest aerospace titan.