Economic downturns can be tough on apparel retailers, but the children's clothing specialist is well-positioned for the one that we're heading into.

With the country likely plunging into a recession, many U.S. apparel retailers are struggling. Most of their brick-and-mortar stores are closed, and consumers are cutting back on some discretionary spending. However, revenue in the baby and young children's clothing category tends to be more stable than in other categories, even in recessionary times.

During the period from 2007 to 2010, which bracketed the Great Recession, Carter's (CRI -0.48%) net sales increased each fiscal year. It was performing well prior to last quarter, too, boosted by market share gains and strong wholesale relationships with Target, Walmart, and Amazon. The children's apparel marketer will likely continue to be a good performer among apparel names. 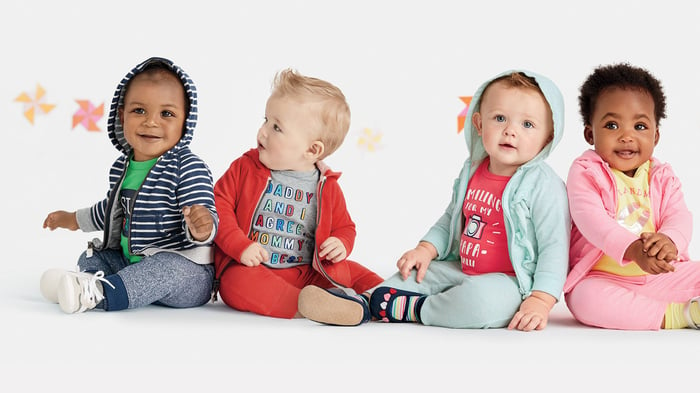 How Carter's is growing

Carter's has withdrawn the full-year guidance it offered on its Feb. 24 earnings call, but it plans to give a business update by the end of the month. In the meantime, the company is furloughing store employees and temporarily reducing salaries, among other measures. "We have strengthened our financial position by reducing inventory receipts, extending payment terms with suppliers and vendors, and implementing thoughtful and necessary cost reductions," CEO Michael Casey said in a statement on April 6.

Prior to the coronavirus pandemic, Carter's business was performing well, with comparable sales increasing by over 2% in the important November-December period. E-commerce drove sales growth in the company's fiscal fourth quarter (which ended Dec. 19); that segment increased to 36% of total retail sales vs. 30% in the prior year. That's especially helpful because Carter's is the biggest e-commerce player in the U.S. children's apparel market by market share.

While the number of births in the U.S. declined by 2% in 2018, Carter's expects to benefit from a few factors. First, the group of Americans in their late 20s to early 30s, a time when many start families, will peak in the next few years. Further, the children's apparel maker is gaining share in the babies' and children's markets. It's also increasing its share of products for 5- to 10-year-olds, which saw the fastest sales growth for Carter's in 2019. The size of the U.S. children's apparel (infant to 7) market is worth an impressive $27 billion, according to Statista, and Carter's $3.5 billion in revenue last fiscal year leaves it plenty of room to grow.

Meanwhile, Carter's wholesale division has strong support from its top customers -- Amazon, Walmart, and Target, all of which are faring well during the pandemic. Carter's exclusive baby apparel brands have been selling at Target and Walmart for almost 20 years. Carter's also has more recently created an exclusive brand for Amazon. In 2019, Carter achieved double-digit sales growth in its exclusive brands. These partners will likely continue to see strong sales growth after the recession.

Walking on their own

Carter's operates with less leverage than retail competitors like The Gap and The Children's Place, and its quick ratio near 1 means it can just about cover current liabilities with its liquid assets. The company is taking steps to shore up its finances in an environment of slower sales, including cutting capital expenditures, reducing inventory commitments, and reducing other expenses. The retailer has also drawn most of the $750 million under its available revolving credit facility.

While Carter's will likely experience a decrease in revenue due to the pandemic, it is better positioned for a recession than many retailers. The company focuses on providing products that are well priced and offer value. Carter's exclusive brand presence in Walmart, Target, and Amazon is likely to be a big growth driver during the economic slowdown and for the rest of the pandemic. These retailers have been taking share and reporting strong revenue increases. Carter's is also better positioned in the children's segment of apparel sales, which is more defensive than the overall retail sector.