Please ensure Javascript is enabled for purposes of website accessibility
Log In Help Join The Motley Fool
Free Article Join Over 1 Million Premium Members And Get More In-Depth Stock Guidance and Research
By Rich Smith – Apr 26, 2020 at 7:13AM

Virgin Atlantic's sales are drying up. Virgin Galactic has practically no sales. Is that a bad thing or a good thing?

Virgin Atlantic, the UK-based airline that British billionaire Sir Richard Branson established in 1984, might not live to see 2021. That's the upshot of a blog entry that Branson penned on the Virgin Atlantic website earlier this week. 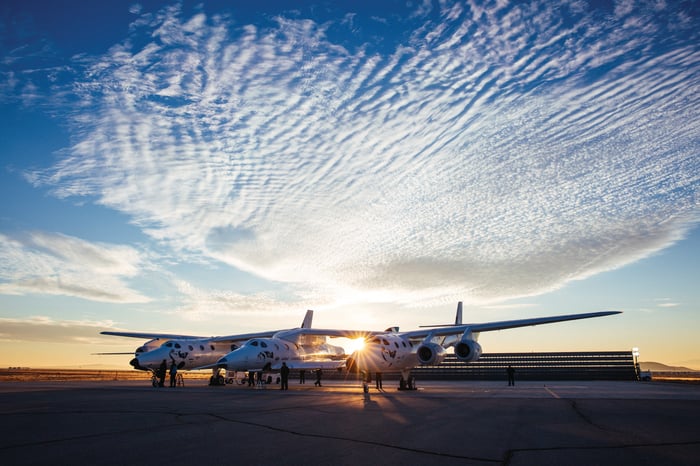 A "devastating ... pandemic" and "unprecedented crisis" have grounded most of Virgin Atlantic's airplanes and starved the company of cash flow. The billionaire doesn't have the cash to save it, either -- his $5.8 billion net worth is tied up in "the value of Virgin businesses around the world."

Branson's partner in owning Virgin Atlantic, Delta Airlines (DAL -3.14%), has problems of its own. With much of its own fleet grounded, and its cash burning away at the rate of $100 million a day, Delta lacks any cash to help out Virgin Atlantic.

And when Branson approached the government of the United Kingdom seeking a $620 million commercial loan to help keep Virgin Atlantic afloat, the government demurred.

Against the ropes and with the clock running out, Branson offered to mortgage his own private Caribbean island as security for a loan this week. So far, no one has taken him up on the offer -- and Britain's Guardian newspaper worries that Virgin Atlantic could be "going bust."

All of this bad news for Virgin Atlantic bled over to Branson's other famous "air"-line this week. On Tuesday, shares of would-be space tourism company Virgin Galactic stock suddenly rolled over and sank 12%.

Virgin Galactic stock, which topped $37 a share back in February before COVID-19 tanked the market, has lost more than half its value in the two months since. Although the shares began reviving in early April, Virgin Galactic has struggled along with the rest of the market to maintain momentum, and resumed its downward drift about a week ago.

Now, its downward spiral seems to be accelerating. But how is this connected to Virgin Atlantic?

Well, consider: The last time we heard from Virgin Galactic on the subject of earnings, there ... weren't any. Having yet to actually fly a single commercial flight, Virgin Galactic did barely half a million dollars in revenue in all of Q4 2019. Meanwhile, the heavy investments needed to ready its VMS Eve carrier aircraft and VSS Unity spaceplane for safe transport of tourists to space are pushing Virgin Galactic into deeper and deeper losses with every passing quarter:

And suffice it to say that if Branson doesn't have the cash he needs to salvage his 36-year investment in his flagship company, Virgin Atlantic, he probably also doesn't have a lot of resources to spare for Virgin Galactic. If Virgin Galactic is going to survive this recession, it's probably going to have to do so on its own.

Aside from that, Mrs. Lincoln, how was the play?

Now, it's not all bad news. If Virgin Atlantic's big problem right now is that the COVID-19 pandemic has dried up its sales, then Virgin Galactic's situation is a bit different. On the one hand, no, Virgin Galactic has no sales right now -- but on the other hand, it also has no sales to lose. As business magazine Barron's recently commented, "COVID-19 can't hurt companies with no sales."

Granted, there are the company's continuing GAAP losses to consider. But here, too, Virgin Galactic is not without a defense. Thanks to its 2019 merger with Social Capital Hedosophia, Virgin Galactic is heading into this recession with $480 million in cash in the bank. Furthermore, 600 customers having already prepaid a further $83.4 million in deposits against the ticket cost of their future flights, according to data provided by S&P Global Market Intelligence, and other deposits can be expected via the company's recently announced "One Small Step" program.

Despite the high and rising losses the company has been reporting, that's probably still enough cash to see it through the end of 2020 and into 2021, at which point Virgin Galactic CEO George Whitesides predicts the company will see a "ramp up in our revenue and cash flows," and the "business will really gain momentum."

Whitesides is probably right about the company's ability to ramp sales, too. In Virgin Galactic's Q4 conference call, the CEO revealed that, in addition to its 600 firm reservations, Virgin Galactic has 7,957 people who have signed up on its website, signaling interest in paying a reported $250,000 a ticket on future flights to the edge of space.

If Virgin Galactic can make it through 2020 recession, and if it can launch Mr. Branson into space this year, as it has promised to do, and then build more spaceplanes and make more launches in 2021 to accommodate that large waiting list of would-be customers -- then things could still work out well for Virgin Galactic.

And Sir Richard Branson may not even have to mortgage any islands to make it happen.