Shares of industrial behemoth General Electric (GE -2.51%) shot sharply higher in morning trading Tuesday, up 5.8% before retracing a bit to something closer to a 4.5% gain as of 1:40 p.m. EDT.

Why did GE stock go up, and why did it go back down? 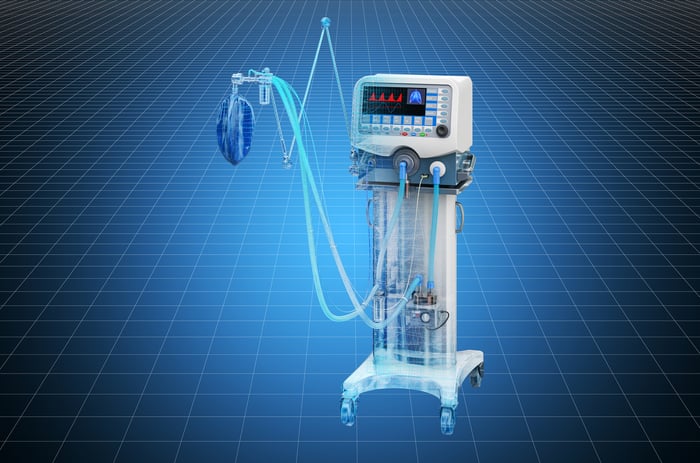 For the answer to the first question, we turn to Ford Motor Company (F -1.29%), GE's partner in a Defense Production Act initiative to ramp up the production of ventilators for treating seriously ill COVID-19 patients in the U.S.

According to TheFly.com, it's been a little over a month since President Trump first tweeted that Ford (and others) had been given the go-ahead to make ventilators, and just a little less than a month since Ford announced that it will collaborate with GE Healthcare to produce "a third-party ventilator [designed by privately held Airon Corp] with the goal to produce 50,000 of the vitally needed units within 100 days and up to 30,000 a month thereafter as needed."

On April 16, the Department of Health and Human Services announced a new contract to this effect, signed under the ambit of the Defense Production Act, agreeing to pay Ford and GE $336 million to produce the initial batch of 50,000 ventilators by July 13. Ford's earnings report, due out this evening, could give investors some insight into how Ford -- and GE -- are doing on this initial contract, and how prepared Ford -- and GE -- are to continue producing and selling ventilators for domestic and global use thereafter.

The prospect of this update on the hundreds of millions of dollars in ventilator revenue GE is set to reap may explain why GE stock rose this morning. As for why the stock then gave back some of its gains, we turn next to Reuters, which reports today that an even bigger part of GE's business -- "a multibillion-dollar slice of revenue" -- could be at risk.

As the news agency advises, "several major U.S. utilities" appear to be "halting or deferring maintenance" on their GE-built generators due to a lack of power demand resulting from the coronavirus pandemic. Generator maintenance is a $3.6 billion-a-quarter business for GE, "second only to $5.4 billion in services revenue at its aviation unit," which is also not in the pink of health these days.

Despite the newfound revenue from building ventilators, a shortfall in generator maintenance sales may seriously impact GE's financial performance this year. That's the reason GE stock isn't doing as well as it might.