Facebook expands Messenger’s video calls to challenge Zoom, but will this new feature suffer the same fate as its other doomed clones of hot apps?

Zoom Video Communications (ZM -2.72%) has been one of the hottest growth stocks of 2020. Usage of Zoom's video conferencing platform spiked as the COVID-19 pandemic forced people to stay at home, and its stock surged over 140%.

However, Zoom's stock recently dipped after Facebook (META 0.30%) launched Messenger Rooms, which boosts its maximum number of participants per video call from eight to 50. The upgrade could help Facebook keep pace with Zoom, which supports video meetings of up to 100 people on its free tier. 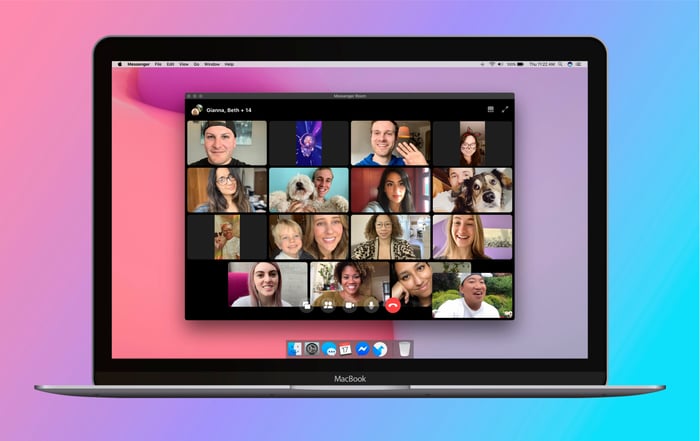 Messenger Rooms joins a growing list of competitors, including Cisco's Webex and Tencent's VooV Meeting, which could carve up the video conferencing market and curb Zoom's weed-like growth. That competition, the bears argue, could pop the stock's bubbly valuation of roughly 400 times forward earnings. But if we look closer at Messenger Rooms, we'll see that Zoom probably shouldn't lose much sleep over this newest challenger.

Facebook, which had 2.5 billion monthly active users (MAUs) at the end of 2019, is already the world's largest social media platform. However, its growth is decelerating -- especially in higher-revenue markets like the U.S., Canada, and Europe -- and it's growing increasingly dependent on Instagram for fresh growth.

Facebook's growth in developed markets has also been hampered by privacy and security debacles, and a loss of younger users on its core platform. Piper Jaffray's latest "Taking Stock with Teens" survey found that only 31% of U.S. teens regularly engaged with Facebook, putting it in fourth place behind Instagram (85%), Snap's (SNAP -4.96%) Snapchat (81%), and Twitter (40%).

In short, Facebook needs new ways to expand its ecosystem, so it frequently chases popular apps with its similar products. It cloned many of Snapchat's popular features in Instagram, created a TikTok clone called Lasso, rolled out dating features to challenge Match's Tinder, and copied Pinterest with Hobbi.

Messenger Rooms is just the latest extension of that strategy. It also complements Facebook's recent introduction of group calls on WhatsApp, live desktop streams on Instagram, and direct video links between Portal devices and Facebook pages, which all widen its moat against growing video services like Zoom.

None of Facebook's clones have disrupted the niche leaders, for two simple reasons: The smaller apps enjoyed a first mover's advantage against Facebook, and they had already created sticky user ecosystems prior to Facebook's intrusions. 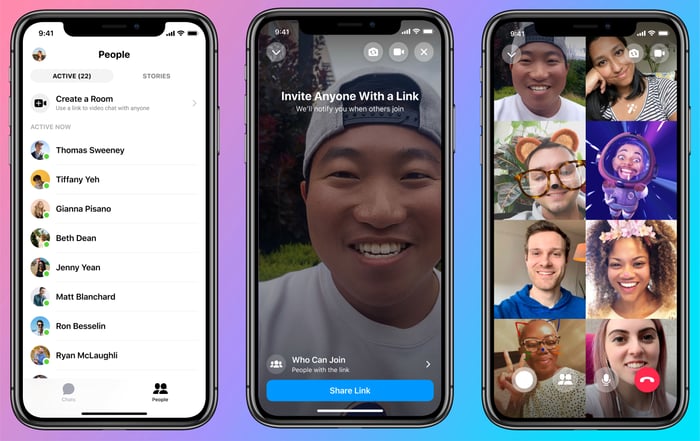 Facebook arguably gained the most ground against Snapchat, causing the app's user growth to stall out in 2018, but Snap returned to growth over the past year as it expanded its ecosystem with new videos, lenses, and games. Facebook's Lasso and Hobbi barely registered with TikTok or Pinterest users, and the jury's still out on its online dating efforts.

Most of these smaller apps were developed by Facebook's New Product Experimentation (NPE) team, which develops, tests, and, when necessary, kills off experimental apps at a much faster rate than its parent company.

Messenger Rooms appears to be a more permanent feature, but I doubt its upgrade to 50 users will suddenly pull users away from Zoom, which grew from 10 million daily active users to over 200 million in the first three months of 2020. Facebook already provided plenty of ways to place video calls as Zoom grew, so it seems like people intentionally migrated from Facebook to Zoom's newer platform.

Messenger Rooms might gain more users in overseas markets where Zoom has a limited presence. But Zoom's growth in the Americas, where it generated 85% of its revenue last year, could prevent Rooms from gaining ground in Facebook's most profitable markets.

On its own, Facebook's Messenger Rooms probably won't curb Zoom's growth. However, the combination of Rooms, Facebook's other video call features, and well-funded competitors like Webex and VooV could eventually cap Zoom's growth -- especially if the pandemic passes and people shift back to traditional messaging apps. Zoom's recent streak of security gaffes could also tarnish its image.

Zoom's stock is also priced to perfection, so any signs of a slowdown, growing competition, or security issues could cause a steep sell-off. For now, Zoom's stock has a lot of momentum, but I can't consider it a viable long-term investment until its valuation cools and it shows some staying power after the pandemic ends.