Please ensure Javascript is enabled for purposes of website accessibility
Log In Help Join The Motley Fool
Free Article Join Over 1 Million Premium Members And Get More In-Depth Stock Guidance and Research
By Keith Speights – Apr 29, 2020 at 7:14AM

Which stock wins in a battle between these two clinical-stage biotechs?

You can't lump all clinical-stage biotechs together. Take Cara Therapeutics (CARA -3.64%) and Sangamo Therapeutics (SGMO -1.79%), for example. The two biotechs are about as different as night and day. One thing that both Cara and Sangamo have in common, though, are promising pipeline candidates.

Investors have placed a greater value on Sangamo's pipeline based on the company's higher market cap. But which of these biotech stocks is the better pick for long-term investors? Here's how Cara and Sangamo stack up against each other. 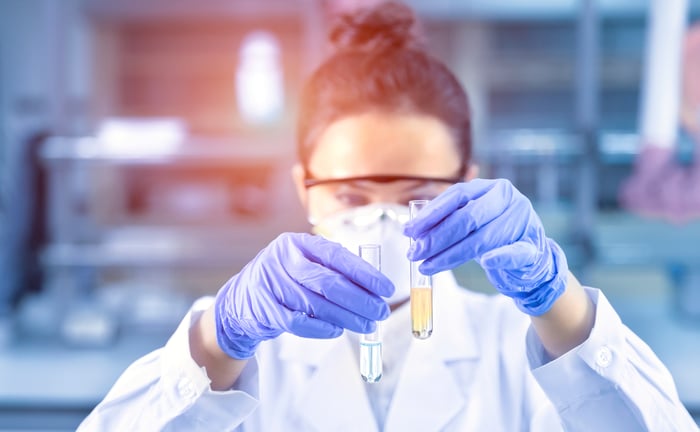 All of Cara Therapeutics' hopes ride on one drug -- Korsuva. But that one drug has multiple formulations and multiple opportunities.

The most promising of these opportunities is for Korsuva injection in treating chronic kidney disease-associated pruritis (CKD-aP) in patients on hemodialysis. The itching (pruritis) experienced by many patients with CKD is very problematic. So far, there haven't been any approved treatments for CKD-aP.

That could soon change. Last week, Cara and its partner, Vifor Fresenius Medical Care Renal Pharma, announced positive results from a global late-stage study of Korsuva injection in treating CKD-aP in patients on hemodialysis. These results reinforced positive results reported last year from a U.S. study. The two companies plan to file for U.S. regulatory approval for Korsuva injection in the second half of 2020, followed closely by filing for European approval of the drug.

Cara anticipates completing an interim statistical analysis within the next couple of months for a phase 2 study evaluating an oral version of Korsuva in treating pruritis in patients with atopic dermatitis. The biotech is also conducting another phase 2 study of oral Korsuva in treating patients with pruritus and hepatic impairment due to primary biliary cholangitis (PBC).

Oral Korsuva should advance to a late-stage study in treating CKD-aP in patients who aren't on hemodialysis later this year. Cara reported results from a phase 2 study in December with the drug meeting its primary endpoint but failing to meet two secondary endpoints.

Korsuva injection could achieve peak annual sales topping $500 million. An oral version of the drug could boost that number considerably. With Cara Therapeutics' market cap currently below $750 million, the stock should have plenty of room to run if Korsuva wins regulatory approvals and reaches its commercial potential.

Unlike Cara Therapeutics, Sangamo isn't hanging its hat on only one candidate. The biotech's pipeline includes five different therapies in clinical testing. However, none of these programs are yet in late-stage testing.

In February, Sangamo announced a deal with Biogen to develop gene therapies targeting neurological diseases. Three of Sangamo's preclinical programs are included in this agreement.

Sangamo's market cap stands at a little under $1 billion. While the company has a long way to go before any of its candidates could potentially win approval, it also has multiple shots on goal. Successes for only one or two of its experimental therapies would enable this small biotech to become much larger.

I think that both of these stocks could be big winners over the long run. However, my view is that Cara Therapeutics offers a better risk-reward proposition.

Although it's not a slam dunk that Cara wins FDA and EU approvals for Korvuva injection, I think the odds appear to be pretty good. Assuming those approvals are secured, Cara should be set to begin pulling in some solid revenue by late 2021.

Having said that, it wouldn't surprise me if Sangamo achieves greater success by the end of this decade. I think that investors should keep the biotech on their radar screens.