Please ensure Javascript is enabled for purposes of website accessibility
Log In Help Join The Motley Fool
Free Article Join Over 1 Million Premium Members And Get More In-Depth Stock Guidance and Research
By Reuben Gregg Brewer - May 1, 2020 at 8:20AM

Having bought its way into the pet food market, dividend investors need to pay close attention to the company's debt load.

General Mills (GIS -0.29%) is best known for making people food, but in 2018, it expanded its target audience to include pets. Although it was a big move, it actually sticks close to the packaged food company's core business approach.

Here's how the deal for Blue Buffalo is going so far -- and the big number that dividend investors need to watch today.

It's not all about food

When investors think of General Mills, the first thing that comes to mind is likely packaged foods like cereal or baking products. As a consumer staples company, that is indeed what it makes, but it isn't the right way to think about the business. What General Mills really does is manage brands, building on its scale and distribution network to create strong relationships with the retailers who sell its branded products to consumers.

The company's portfolio of products is filled with names you likely know, and probably use all the time, including Cheerios, Yoplait, Haagen-Daz, and Pillsbury, among many others. Although built over time, this is not a random collection -- General Mills carefully curates the list. For example, it sold off Green Giant a few years ago and added healthy-food focused Annie's and Larabar. The goal was to adjust to changing consumer buying habits.

That's where General Mills' 2018 purchase of Blue Buffalo comes in. It was an $8.3 billion acquisition that some suggested was on the expensive side. There's no question it was a lot of money to spend, but the company wasn't just adding pet food to the list of products it sells. It was adding the No. 1 brand of healthy pet food, or looking at it another way, buying into a major offering with a leading market position. Better yet, Blue Buffalo was just starting to expand into the mass merchant space where General Mills is a dominant force. Management believed it would be able to help accelerate the expansion at Blue Buffalo and turn it into a growth engine for General Mills.

As it turns out, Blue Buffalo has largely lived up to expectations, posting robust sales growth numbers since being added to the portfolio. For example, in the fiscal third quarter of 2020, Blue Buffalo sales were up 11% with segment operating profits advancing 29%. This is notable, because some peers haven't been doing quite as well. J.M. Smucker's provides a useful point of comparison, having seen its pet food business struggle lately. Both companies had the same basic idea, but one has been executing better. That said, the rest of General Mills' brand portfolio is something of a mixed bag performance-wise, so it isn't exactly firing on all cylinders.

That brings up the most important number for investors to watch: leverage. In fact, when General Mills bought Blue Buffalo, it acknowledged the high price and the additional debt that would be needed to get the deal done. To put a number on that, the company's debt-to-EBITDA ratio was around 3.2 times at the start of 2018 (before the deal). By the end of that year, that metric had spiked to over 4.7 times. The company went from covering its interest expenses by more than eight times at the end of 2017 down to around five times in early 2019. Clearly, General Mills' leverage profile changed dramatically. 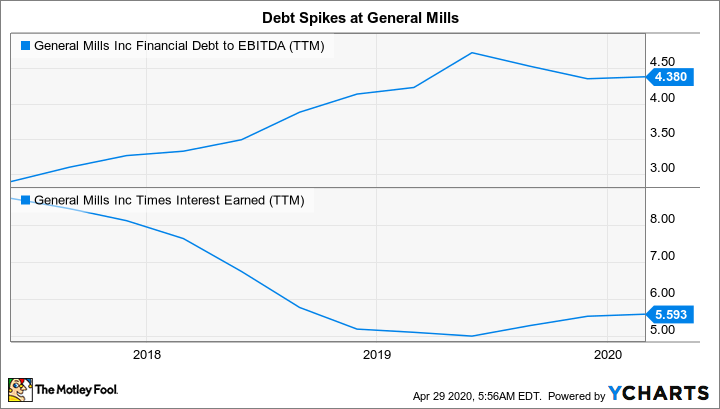 None of this is meant to suggest that the food maker is in imminent financial danger -- that's not the case at all. However, its balance sheet is not as strong as it once was. The company recognizes this and has made reducing leverage a key focus. It has stated that it will hold its dividend at the current rate until leverage is back in line with historical trends. That will require paying down a big chunk of the debt that's sitting on the company's balance sheet -- which has been happening, albeit slowly.

Long-term debt went from $9.6 billion in early 2018 to a high of $15.8 billion when the acquisition closed. Today that figure sits at roughly $13.6 billion, so in just two years, General Mills has reduced its debt balance 14%. Not a huge change, but it is clearly moving toward healthier levels (a debt-to-EBITDA ratio of approximately 3.5 times). In other words, dividend investors will have to wait longer before there are any payout increases.

Meanwhile, the company is hoping it can hit its internal leverage targets some time in the next year. Even if it does, which could get complicated by the economic impacts of COVID-19, don't expect an immediate dividend hike -- that might not happen until the following year. Perhaps this is a conservative view of the situation, but it's better to be surprised by an earlier payout raise than disappointed by one that doesn't happen.

In 2018, General Mills made a big bet on pet food, and so far, that bet appears to be paying off. But if you own the stock for its dividend, you should closely monitor the company's progress deleveraging its balance sheet