Please ensure Javascript is enabled for purposes of website accessibility
Log In Help Join The Motley Fool
Free Article Join Over 1 Million Premium Members And Get More In-Depth Stock Guidance and Research
By Leo Sun - May 3, 2020 at 1:00PM

The apparel retailer survived the retail apocalypse, but can it withstand a global pandemic?

American Eagle Outfitters' (AEO -4.36%) stock plunged nearly 70% over the past 12 months as the apparel retailer grappled with slowing sales growth, contracting margins, and the COVID-19 pandemic. It also closed its stores, deferred its dividend payment, and recently priced a new offering of convertible notes to cope with the crisis.

Those developments clearly spooked the bulls, but are investors too bearish on AEO, which has posted five straight years of comparable store sales growth as many of its rivals succumbed to the retail apocalypse? Let's dig deeper to see if AEO's stock will rebound after the pandemic passes. 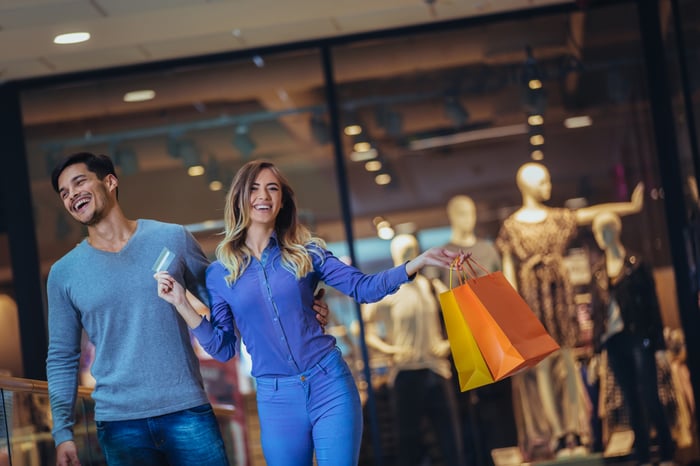 How AEO survived the retail meltdown

AEO faced the same headwinds that have battered many of its industry peers: sluggish mall traffic, fickle shoppers, and competition from fast fashion retailers, superstores, and e-tailers.

AEO also sold more products online through both banners. Its digital platforms generated about 33% and 45% of AE and Aerie's sales, respectively, last quarter.

However, a higher mix of online sales also reduced AEO's margins with higher fulfillment costs. Those expenses, along with a tougher promotional environment, caused AEO's gross margin to contract annually from 34.6% to 31% last quarter.

Its balancing act just got a lot tougher

AEO's revenue rose 7% to a record $4.3 billion in 2019, but its operating profit tumbled 31% and its adjusted EPS -- which excluded some big impairment and restructuring charges -- stayed flat.

In early March, AEO expected to post low single-digit comps growth in the first quarter, with an 8%-17% decline in its adjusted EPS. In other words, it still expected Aerie's growth to offset AE's sluggishness, and for higher fulfillment expenses and markdowns to dent its margins.

However, AEO withdrew that guidance in early April after temporarily closing all its North American stores in mid-March. It also suspended its buyback plans and deferred its first-quarter dividend payment to the end of the month.

AEO started the year with $417 million in cash and short-term investments with no debt, but it recently drew down $330 million from its revolving credit facility and priced an offering of $400 million in convertible notes (at an interest rate of 3.75%), which mature in 2025. Those moves will all boost AEO's liquidity throughout the crisis, but the interest payments will throttle its cash flows as it reopens its stores.

Glimmers of hope on the horizon

That situation sounds dire, but a few tailwinds could also kick in after the crisis ends.

First, L Brands (BBWI -4.36%) might not survive the pandemic after Sycamore Partners, which agreed to buy a 55% stake in Victoria's Secret in February, tried to cancel the deal. If the deal collapses and forces Victoria's Secret to shutter more stores, Aerie could pick up a lot of new shoppers.

Second, AEO recently launched curbside pickups for online orders. Those orders won't offset its loss of brick-and-mortar sales, but they'll leverage the strength of its online platforms to cushion the blow. Only a handful of other apparel retailers, mainly large department stores and superstores, are offering curbside pickup services throughout the crisis.

Lastly, AEO's namesake brand remains popular with teens. American Eagle was ranked as the second-favorite clothing brand for U.S. teens after Nike in Piper Jaffray's latest "Taking Stock with Teens" survey, and the third-favorite shopping website after Amazon and Nike. Pent-up demand from teen shoppers could significantly boost the brand's comps growth after the crisis ends.

Is it the right time to buy AEO?

Analysts expect AEO's revenue and adjusted EPS to decline 11% and 72%, respectively, this year. Those forecasts look grim, but they also anticipate 11% revenue growth and 146% earnings growth next year as the business recovers.

We should take those estimates with a pillar of salt, but AEO trades at just six times forward earnings, with a forward dividend yield of nearly 7% -- if it doesn't defer its future dividend payments. That low valuation and high yield could set a floor under the stock.

However, it's tough to recommend buying AEO with so many headwinds bearing down on the company. I personally own a small stake in AEO, but I won't add any more shares until it offers some insights into how it's fared through the downturn.