Please ensure Javascript is enabled for purposes of website accessibility
Log In Help Join The Motley Fool
Free Article Join Over 1 Million Premium Members And Get More In-Depth Stock Guidance and Research
By Billy Duberstein – May 3, 2020 at 10:00AM

The online travel bookings site landed funding to get it through COVID-19.

Shares of Expedia (EXPE 2.38%) rose 26.1% during the month of April, according to data from S&P Global Market Intelligence. The online travel agency had been extremely hard hit in March, as travel bookings essentially tumbled to almost nothing amid the outbreak of coronavirus.

However, Expedia was able to raise a significant amount of capital in April, including $2.75 billion in new debt from the bond market and $1.2 billion in preferred stock and warrants from private equity firms Apollo Global Management and Silver Lake. Investors cheered the money raise, as most suspect it will get Expedia to the other side of the outbreak. 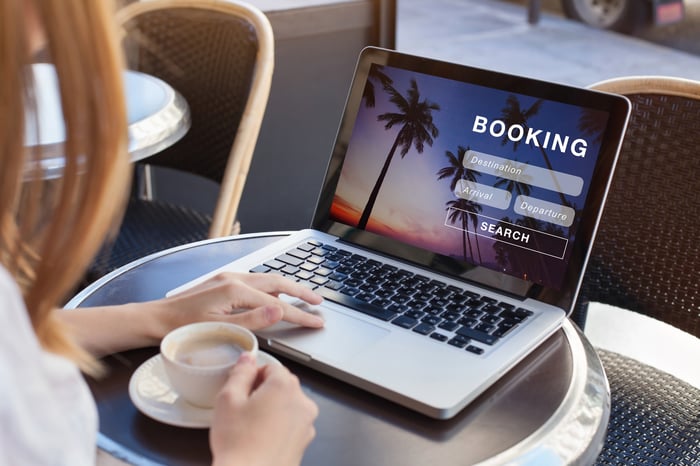 According to the terms, Expedia will pay 9.5% interest on the preferred stock maturing in 2025, along with warrants to purchase a total of 8.4 million Expedia shares at $72. In addition, Expedia raised $2 billion in notes maturing in 2025 at 6.25% and another $750 unsecured notes at 7%.

That's a fairly expensive raise, but it should shore up Expedia's liquidity position as it rides through this unprecedented slowdown in travel. In addition, David Sambur, co-lead partner of Apollo's private equity business, and Greg Mondre, co-CEO and managing partner of Silver Lake, will join Expedia's board.

The company also appointed Peter Kern to be Expedia's new CEO. Kern had been a director of the company since 2005, and is a close confidante of large shareholder Barry Diller, who had taken over as interim CEO in December after ousting former CEO Mark Okerstrom after years of underperformance. Shareholders applauded the Kern appointment, as the permanent situation seems poised to continue the cost-saving measures implemented by Diller in the interim.

Encouragingly, Kern will also forgo his cash compensation -- and senior executives have also agreed to 25% reductions -- as long as the current situation persists. Expedia will also furlough certain workers and go to shortened workweeks for other employees at least through Aug. 31. The company will also stop matching 401k plan contributions through the end of the year.

In a filing, Expedia said that new bookings in the second half of March were down a stunning 85% to 90%, but that these cash-conservation measures should allow Expedia to burn just $275 million or less per month at the current run rate. However, if conditions persist, Expedia said that it could potentially cut even more.

With $4.1 billion in unrestricted cash at March 31 -- albeit with some liabilities for cancellations -- and another nearly $4 billion coming in from these capital raises, investors appeared to assess that Expedia now has an ample cash cushion to get through a long period of time until people start traveling again. Therefore, it's no wonder that the stock rebounded after the March crash.