Please ensure Javascript is enabled for purposes of website accessibility
Log In Help Join The Motley Fool
Free Article Join Over 1 Million Premium Members And Get More In-Depth Stock Guidance and Research
By Howard Smith – May 4, 2020 at 11:12AM

The maker of Honda and Acura brands said it is starting to see more consumer traffic.

The American Honda business of Honda Motor (HMC 3.66%) just reported its April auto sales, and they were ugly. Sales fell a whopping 54.1% compared with a year ago. However, the company announced that the final weeks of the month began to show signs of improvement.

Car sales were down an average of 55%, with similar results in both its Honda and Acura brands. Truck sales saw an average decline of 53%, at a 52% rate for the Honda brand, and 58% with Acura. Steven Center, vice president of Automobile Sales at American Honda Motor Co., Inc. commented, "with consumer traffic beginning to increase online and at Honda and Acura dealerships, we are approaching the coming weeks with guarded optimism." 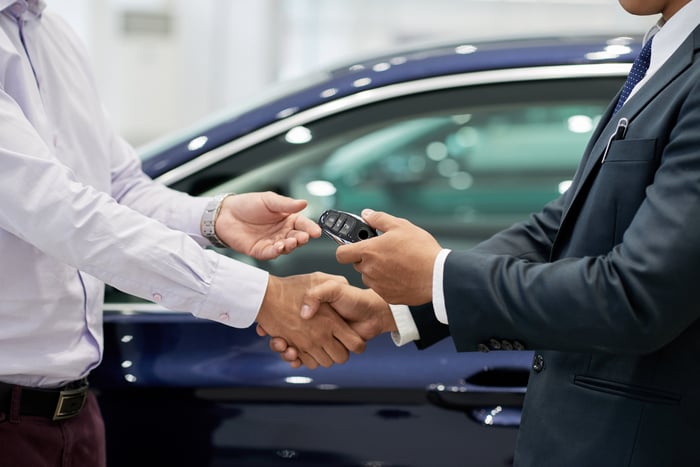 Honda's North American manufacturing facilities are currently shut down due to the ongoing COVID-19 pandemic. The company suspended automobile production at its North American plants on March 23, 2020. The company recently extended its outage plans to keep automobile, engine, and transmission plants shut down through May 8, 2020. Its South Carolina powersports facility, which makes ATVs and side-by-side vehicles, is scheduled to restart production on May 4, 2020.

Most salaried and support staff employed in Honda's U.S. operations have been furloughed, and are currently scheduled to return to work on May 8 or May 11, depending on location. The company said that as states and localities have begun to ease stay-at-home restrictions, it is seeing an increase in customer traffic at its showrooms. Honda also began new online retailing programs in April. Online traffic has also been increasing in recent weeks.