Please ensure Javascript is enabled for purposes of website accessibility
Log In Help Join The Motley Fool
Free Article Join Over 1 Million Premium Members And Get More In-Depth Stock Guidance and Research
By Lee Samaha – May 4, 2020 at 9:34AM

Shares of industrial giant General Electric (GE 5.85%) slumped 14.4% in April, according to data provided by S&P Global Market Intelligence. The move is particularly concerning when you consider that the S&P 500 index was up nearly 14% over the same period. Moreover, aerospace peers like Honeywell (HON 2.74%) and Raytheon Technologies (RTX 2.73%) also generated high single-digit returns in the month.

The reason for GE's decline probably comes down to a combination of its heavy exposure to commercial aviation and the fact that the other parts of its business are under pressure, too. 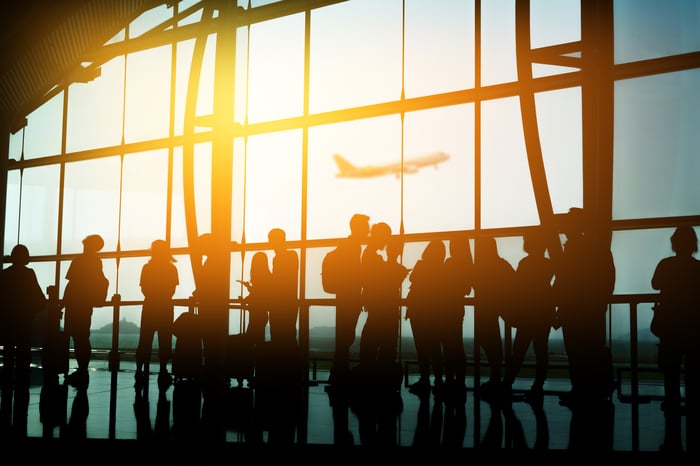 It gets worse when you dig into the commercial/military revenue split at GE Aviation. Commercial aviation engine and services generated $24.2 billion in sales in 2019 compared to just $4.4 billion from the military side. Unlike Raytheon Technologies, GE doesn't have a significant military business on which it can fall back on for support during a potentially weak period for commercial aviation. In addition, Honeywell's income stream is much more diversified than GE's.

Even worse. GE Capital's most valuable business is actually an aircraft leasing business, GE Capital Aviation Services or GECAS --  horrible industry to be in during a downturn in commercial aviation.

Turning to the other parts of the GE portfolio, GE Power services will be negatively impacted by the lack of demand for electricity, and even GE Healthcare is being hit by patients deferring elective surgeries.

Looking at matters from a brighter perspective, air travel will surely come back as travel bans are eased, and GE's dominant position in the installed base of commercial aircraft engines -- GE and its joint ventures contribute more than 60% of the engines in service in North America and Europe -- means it will generate substantive service revenue when planes get flying again.

In addition, power demand should improve in the future as economic growth improves from the low point in the second quarter. Furthermore, there's probably a fair amount of pent-up demand for healthcare equipment building up right now. GE will see better days ahead.

Unfortunately, it's far from clear what the shape of the recovery in commercial aviation will be. Even if you think consumer demand will pick up as containment measures are relaxed, you still have to factor in that governments worldwide are responsible for travel bans and the financial state of the airline industry. That's not so easy to predict.