Please ensure Javascript is enabled for purposes of website accessibility
Log In Help Join The Motley Fool
Free Article Join Over 1 Million Premium Members And Get More In-Depth Stock Guidance and Research
By James Brumley – Updated May 5, 2020 at 10:36AM

The spirits business is faring better than most other alcohol lines, and Diageo is better positioned than most investors realize.

Like most consumer-facing companies, spirits producer Diageo (DEO 0.04%) has struggled with the effects of coronavirus-related shutdowns. It's not that consumers don't want its products. It's that they're having a relatively tough time getting them. Most restaurants remain closed, crimping on-premise sales that account for about half of the liquor's total business. The alcohol industry isn't coming out of the COVID-19 contagion unscathed.

It may be faring far better than many people have presumed, however. While consumers clearly aren't buying their booze from bars and restaurants right now, they're buying a whole lot more alcohol from supermarkets and liquor stores than they normally would. Spirits sales continue to lead that charge, building on a trend that was set in motion before the coronavirus outbreak. That's good news for Diageo.

The Spirits Business, an industry news site, reported recently that through the week ending April 18, off-trade sales (that is, sales made in supermarkets rather than restaurants) were up 15%, according to data from Nielsen. The big increase extends a streak of big year-over-year growth that started to take shape in March, as millions and millions of consumers were increasingly told to stay home to curb the spread of COVID-19. 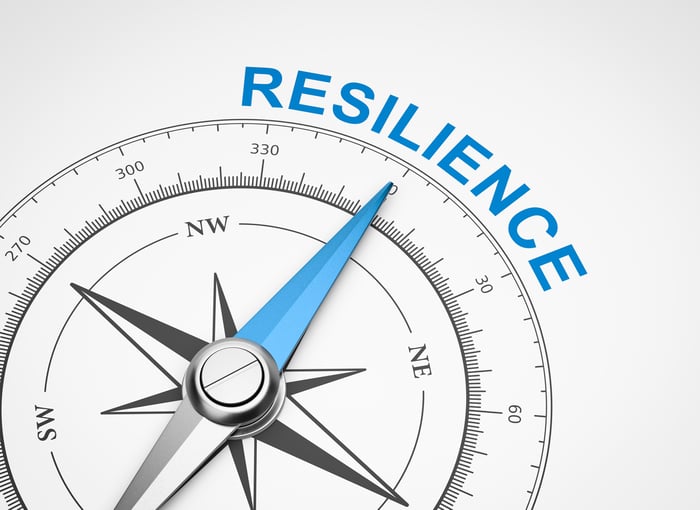 It wasn't a purely American phenomenon either. Nielsen reportedly found that in March, stores' alcohol sales in the UK grew more than 10% even as retail sales slumped 5%.

There was a noteworthy nuance buried within Nielsen's data, however, that The Spirits Business highlighted. Whereas beer and wine sales were up 12% and 14%, respectively, for the week in question, sales of spirits -- vodka, bourbon, gin, and the like -- grew more than 27%.

Online purchases (where permissible) are driving a lot of that growth. Nielsen further reports that between the beginning of March and the middle of April, e-commerce sales of alcohol were up to the tune of 234%. That report didn't indicate exactly what sort of alcohol was leading or lagging that growth, but previous Nielsen numbers have suggested that spirits are responsible for most of that progress as well.

Diageo is the best of the best

It's an undertow that bodes well for the often overlooked and surprisingly resilient spirits segment of the alcohol industry.

An already difficult beer market has been disrupted by the introduction of hard seltzers, which may also be poaching wine drinkers. For the first time in 25 years, wine sales in the U.S. fell in 2019. Largely lost in the discussion is the fact that spirits sales remain relatively unfazed, growing for a 10th straight year in 2019. Within that sliver of the market, Diageo remains an undisputed leader, now for a couple more reasons.

One of them is the fact that Diageo was the winner of nearly 80 awards at this year's San Francisco World Spirits Competition. Awards don't pay bills, and at this particular moment, Diageo would likely rather have liquidity than accolades. It just borrowed $2.5 billion to help navigate the uncertain waters created by the global pandemic.

Still, it's difficult to deny its spirits product lines are some of the best (if not the best) in the world. That counts for something sooner or later.

The other fresh reason? Separately, The Spirits Business reported this week that among the spirits influencers Twitter research outfit GlobalData keeps tabs on, Diageo was their most mentioned brand during the first quarter.

It's another anecdotal piece of information to take with a grain of salt. Just like awards, Twitter mentions don't necessarily produce sales or profits. Influencers are also sometimes paid, and with the World Spirits Competition coming up, it's possible those influencers had good reason to discuss the company.

On the other hand, consumers respond to what they see and hear through social media. If the word Diageo -- or its brands like Ketel One or Pampero -- are making the rounds on the internet, it certainly helps the sales and branding effort.

Don't misread the message. Diageo is seeing good off-trade growth, but that's not its entire business. The coronavirus is taking its toll, to be sure. As GlobalData analyst Carmen Bryan put it earlier this month: "Supply and manufacturing disruptions will likely continue throughout the year, as Diageo and others in the same boat attempt to get back on their feet. The question now is, what does this mean for 2021 and beyond? What is certain, is that recovery will take time."

It's a headwind that may already be priced into shares of the stock though -- and then some -- and erroneously so.

This company's biggest market is North America, where it drives 35% of its total business. But, of that 35%, only 20% of North America's spirits sales is on-trade revenue. The other 80% is off-trade business, which is the piece of the market that's actually seeing growth in the midst of shutdowns. Diageo's next biggest market is Europe and Turkey (mostly Europe), where its on-trade/off-trade split is roughly 50/50 to make up 23% of its top line. But, even so, Nielsen's data indicates that at least some of the effect of coronavirus shutdowns is being offset by increased off-trade buying.

Investors may simply be overlooking these details. As of Monday's close, the S&P 500 was only down 16% from its February high, while Diageo shares were down almost 20% from their January peak. The exaggerated sell-off in February and March, not followed up by a huge recovery effort, suggests the market believes Diageo is far more vulnerable than it actually may be. That's where the opportunity lies.

To that end, analysts are still modeling growth coming out of 2020 and into 2021. 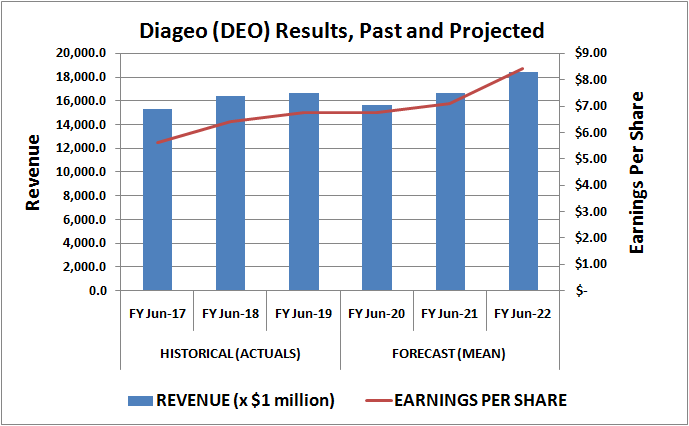