Please ensure Javascript is enabled for purposes of website accessibility
Log In Help Join The Motley Fool
Free Article Join Over 1 Million Premium Members And Get More In-Depth Stock Guidance and Research
By Lee Samaha – Updated May 6, 2020 at 9:51AM

The machine vision company's long-term growth prospects remain intact, but its automotive-related sales will probably be the last to recover from the COVID-19 pandemic.

The long-term growth story at machine vision company Cognex (CGNX 4.80%) is still intact, but investors are going to have to be patient before they see it in the hard numbers. That's the key takeaway from the company's first-quarter earnings report as the COVID-19 pandemic has derailed the idea that 2020 would see a resumption of Cognex's long-term growth trend.

The pandemic is the last thing investors needed to see after a 2019 characterized by weakness in Cognex's key end markets. The company has generated more than 50% of its sales from automotive and consumer electronics in recent years, so when automotive and smartphone sales declined in 2019, Cognex got hit hard.  Machine vision is the process where imaging technology is used to monitor, inspect, and guide automated processes. For example, Cognex's systems can help eliminate defects in automotive production or identify barcodes in e-commerce warehouses. 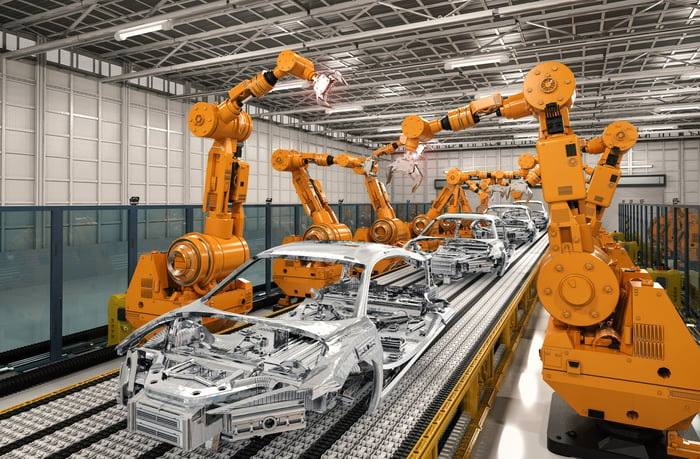 Going into 2020, the hope was that the automotive market would stabilize, leading to increased capital spending on machine vision from the automakers. Similarly, the rollout of 5G was supposed to spur a recovery in consumer electronics spending. Meanwhile, Cognex's fast-growing sales to the logistics market -- largely e-commerce warehousing -- was supposed to continue to support overall growth.

The chart below shows how Cognex sales got hit in 2019 by a combination of weak automotive and consumer electronics markets. 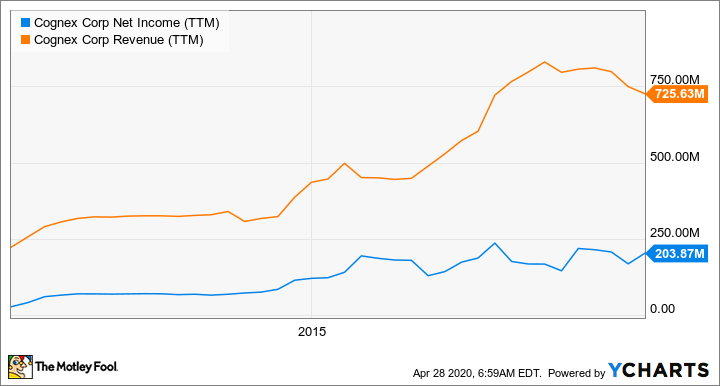 Fast-forward to a COVID-19 world and hopes of a bounceback, at least for 2020, have been dashed. Indeed, Cognex founder and Chairman Bob Shillman couldn't have put it any more clearly when he concluded the earnings call by saying, "...business is not likely to improve until lockdowns end."

That said, investing is all about trying to price into the future, and in this regard there were more than a few takeaways from the quarterly report for investors to consider. Here are four points management made.

1. Things are getting worse

While revenue decreased by only 4% on a year-over-year basis, don't be fooled by the relative strength in this number. The reality is that, according to CEO Rob Willett, activity started to fall off "quite significantly" in April. Willett suggested there may have been a pull-forward in orders due to customers' concern about not being able to receive Cognex's products down the line.

Industrial supply company MSC Industrial also reported this effect in its results. The upshot is the same for both companies. Don't take the recent quarter's numbers as indicative of an underlying trend; the reality is much worse.

2. It will be a slow recovery in automotive

3. Consumer electronics will bounce back quicker than automotives

On a more positive note, it seems that the issue with consumer electronics is more related to the timing of investment and when its customers can start operating their plants at full capacity. Naturally, there are still issues around getting people back on site and sorting supply chain disruptions.

However, these issues are likely to be sorted over time, particularly as governments start to relax the containment measures taken to deal with the pandemic.

The difference between Cognex's automotive and consumer electronics industries is one of a lack of end demand for automotives. Simply put, automakers need to start growing sales/production again before they start to increase capital spending.

4. Other end markets will recover

Finally, with Cognex's two main end markets being weak in 2020, it's somewhat reassuring to see what's going on with some of its other industry verticals. For example, Willett talked about packaging, food and beverage, pharmaceuticals, and medical devices possibly spending more after the COVID-19 pandemic is contained "because I think demand for them in some areas of their business is quite strong."

In addition, it's likely that e-commerce warehouse spending is going to strengthen in a post-COVID-19 world -- and that would be good news for Cognex's fast-growing logistics based sales.

It's going to get worse before it gets better, but it will get better. Although Cognex and other automation-related companies could face some significant weakness in auto-related spending for a while, the consumer electronics market looks likely to bounce back relatively faster, and logistics remains in growth mode.

Cognex's long-term growth prospects are still intact, but it may take a year or so before it starts to show up in its numbers again. All told, Cognex investors are going to need to be patient while hoping for some stabilization in auto production data after the pandemic is contained.