Please ensure Javascript is enabled for purposes of website accessibility
Log In Help Join The Motley Fool
Free Article Join Over 1 Million Premium Members And Get More In-Depth Stock Guidance and Research
By Rich Duprey – May 5, 2020 at 8:40AM

A deal could bolster the one strong area in Apple's otherwise muted second-quarter earnings report.

While it was certainly understandable in the current market conditions that Apple should see sales fall across most of its product lines, the strength of its services business provides a unique opportunity to build out on that success.

Instead of its announced plans to spend $90 billion on stock buybacks over the next few years (which, it should be noted, disappointed most analysts, who seemed to think it was too little), Apple should be using that cash to invest more in its business. 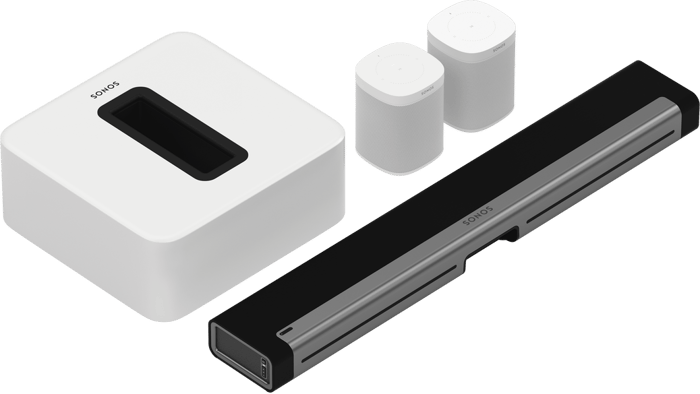 Sonos has a similar design aesthetic that would appeal to Apple customers. Image source: Sonos.

Apple throws off a lot of cash, and it ended the quarter with $40 billion in cash and equivalents and almost $54 billion in marketable securities, while generating over $13 billion in operating cash flow for the period.

There is plenty of money available to buy companies, and CFO Luca Maestri told analysts on the earnings conference call that Apple has always had an active strategy on mergers and acquisitions, and nothing has changed on that front:

We purchase companies on a very regular basis. We're always looking for ways to accelerate our product road maps or fill gaps in our portfolio, both on the hardware side, on the software side, on the services side. So we will continue to do that.

Acquiring Sonos could assist with filling all of those gaps.

On a parallel path

Sonos and Apple are similar companies in the type of consumer they target: someone who looks for a certain design aesthetic in premium-priced quality products that sets them apart from rivals.

Both companies are also increasingly focused on the smart-home needs of those customers, and here Sonos can fill Apple's biggest void, the disappointment of its HomePod speaker, which wasn't even worth a mention during the earnings call.

It was recently reported that a new smaller and cheaper version is to be introduced later this year. Bloomberg says the HomePod has failed to achieve traction because it's not nearly as compatible with music streaming services and various smart-home products, let alone Siri's limited functionality, and the new model has also been plagued by delays.

Sonos has not had such issues, and the advances in capability and compatibility of the Sonos One, Move, Beam, and Playbase speakers and components actually place it far ahead of Apple's more meager achievements in the connected home.

An acquisition could allow Apple to leapfrog over Amazon.com and Alphabet's Google in home audio, especially in multi-room wireless sound technology.

Because Apple's product lineup is weak in this space, Sonos would bolster an already strong services segment, which saw transacting accounts and paid accounts grow at double-digit rates this past quarter, which Apple expects to continue into the June quarter even though it has not given guidance for the period.

Apple benefits not only from its App Store, but also from Apple Music and video, all of which combined to enjoy 17% revenue growth from last year and a 100-basis-point increase in gross margin.

The company is on track to double segment revenue this year from its 2016 base, a goal it has been intensely focused on. But it could amplify those gains considerably with a quality ecosystem based on speakers and components that are able to tune into Apple Music, Google Play, Pandora, and Spotify, while also providing superior television sound.

According to Sonos, its customers listened to 7.7 billion hours of audio last year, up 29% from the year before, a committed, loyal following that emulates Apple's own customer base.

Apple certainly has the cash to make the acquisition, and arguably buying Sonos would be a better investment than buying back its stock, even with its slightly depressed value.

Sonos gives Apple what it needs immediately in a space where it requires a strong presence right away, without sacrificing any quality. Having shown a propensity for buying companies that quickly pay dividends, this is one deal Apple could make without regret.