Shares of Nordic American Tankers (NYSE:NAT) jumped a stunning 33% last month, according to data from S&P Global Market Intelligence. Although the broader rise in the stock market clearly helped, the real reason for the oil tanker owner's gains stems from the oil industry.

Oil prices are very low today because of excess supply. That's the current environment in the energy industry, but there are underlying dynamics that position Nordic American Tankers for a period of big earnings gains. The fact that supply is high is actually driven by two factors. The first is that there is too much oil, helped along by a since resolved price war that broke out between OPEC and Russia. (An additional contributing trend is the long-term rise of the United States as an oil exporter.) This situation was exacerbated by the steep decline in demand that resulted from the worldwide effort to slow the spread of COVID-19, which effectively shut down vast swaths of the global economy. 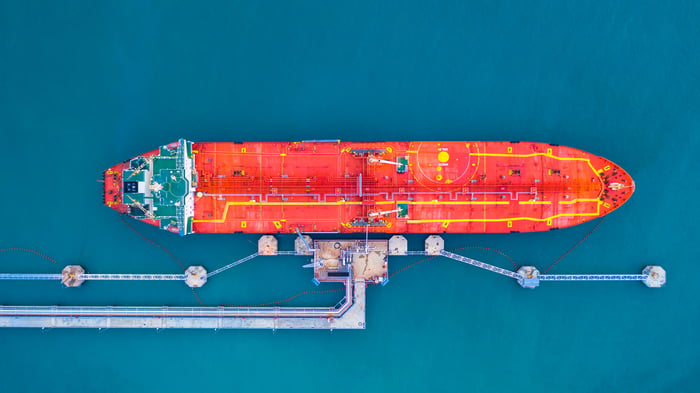 With demand low and supply high, all of the excess oil has been put into storage. But there's only so much storage in the world, which is where Nordic American Tankers comes in. Its fleet of around 20 or so Suezmax tankers normally ferry oil around the world. However, with so much excess oil, its ships are increasingly being called on to act as seaborne storage tanks. The rates it can charge have risen dramatically because of this. Investors, seeing this dynamic, responded by sending the shares sharply higher.

Nordic American Tankers will definitely see a material uptick in earnings because of the current lack of places to cheaply store oil. However, investors need to recognize that this is likely to be a temporary situation. Enjoy it while it lasts, but it won't last forever. And when supply and demand start to rebalance, Nordic American Tankers' shares will likely take a tumble. This is not a good stock for risk-averse investors.