Please ensure Javascript is enabled for purposes of website accessibility
Log In Help Join The Motley Fool
Free Article Join Over 1 Million Premium Members And Get More In-Depth Stock Guidance and Research
By Lou Whiteman – May 7, 2020 at 12:46PM

The market doesn't care for the company's cash-raising efforts.

Shares of Spirit Airlines (SAVE 3.31%) were down 13% on Thursday morning after the discount airline posted a first-quarter loss and announced it was raising fresh liquidity via a stock and convertible bond offering. The company, like all airlines, is struggling due to the COVID-19 pandemic, but the market's reaction appears to be overdone.

After markets closed Wednesday, Spirit reported a first-quarter loss of $0.86 per share on revenue of $771.1 million, falling short of the consensus estimate for a loss of $0.62 per share on sales of $810 million.

The loss was expected, with airlines hit hard by a dramatic decline in air travel due to the pandemic. The current quarter's results are likely to be much worse, with Spirit bringing down capacity by 75% in April and expected to bring down its schedule by 95% in May and June. 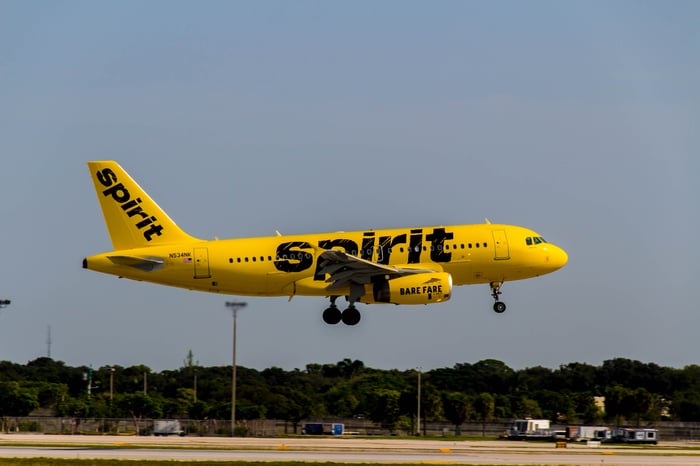 Spirit also said it has commenced an underwritten public offering of 12 million shares as well as $150 million in convertible notes due in 2025, with the underwriters having the option to purchase up to 1.8 million additional shares and up to $22.5 million in additional convertible notes if demand for the offerings is strong. That is going to mean significant dilution for current shareholders, as Spirit prior to the filing had about 68 million shares outstanding.

The dilution is a tough pill to swallow, but the airlines at this point are focused on survival, and Spirit, via the cash raise, is putting itself in a better position to get through the crisis. The company ended the first quarter with nearly $900 million in liquidity, but it does have a significant amount of debt, including a $160 million revolver set to mature at year's end.

The good news is that Spirit is burning through only about $4 million per day. The debt coming due is likely to be refinanced. The company still has a lot of planes scheduled for delivery this year and next that it likely no longer needs; it will have to work out a plan with Airbus to defer deliveries and, hopefully, pre-delivery payments. But overall, Spirit appears to have the wherewithal to survive.

This is still a risky stock, with an unclear future even assuming it survives. There's a speculative bull case to be made that if traffic returns in the summer and fall, but at recessionary levels, Spirit, with its industry-low cost structure, is better positioned than most to stimulate traffic with lower fares. But there is still a lot we don't know about how the next few months will play out for Spirit and the other airlines.