Please ensure Javascript is enabled for purposes of website accessibility
Log In Help Join The Motley Fool
Free Article Join Over 1 Million Premium Members And Get More In-Depth Stock Guidance and Research
By Daniel Miller – May 9, 2020 at 8:33AM

Nobody would have guessed this problem a month and a half ago -- but here we are.

The ripple effect from the COVID-19 pandemic has disrupted the automotive industry as much as many others. Major automakers such as Ford (F), General Motors (GM -2.68%) and Fiat Chrysler Automobiles, have closed factories; suppliers have levels of uncertainty never seen before; and off-lease vehicles are stacking up with no auctions to move them, sending residual values plunging. Let's also not forget that dealership traffic has been devastated, so most new-vehicle sales plunged in March and April.

All of that was mostly expected. But now major automakers face a mostly unforeseen issue: lacking inventory of their most profitable products. Let's take a look at more resilient pickup sales, why inventory is waning, and how much that could devastate automakers' profits.

Glance at General Motors' first-quarter deliveries and it becomes clear just how resilient truck sales can be: Buick's total sales declined 34.7%, and Cadillac's dropped 15.8%, while GM's total sales declined 7.1% -- and remember, the majority of the first quarter took place without COVID-19 impacts. Despite those broader declines, sales of GM's Silverado LD spiked 33% higher during the first quarter, and its sister trucks Sierra HD and Sierra LD soared 42.5% and 27.3%, respectively. 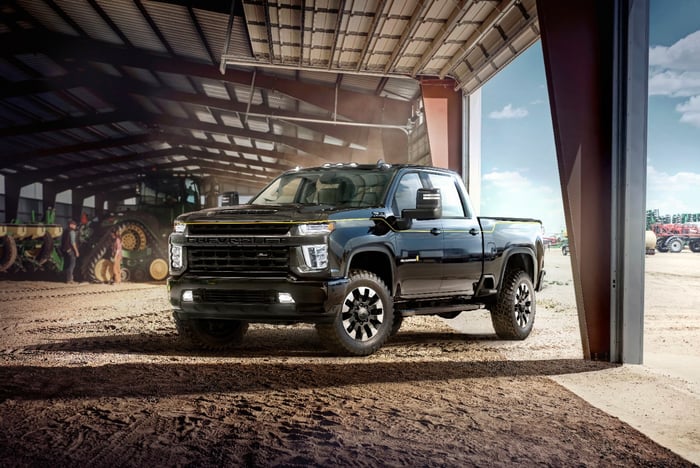 On one hand, generating sales in this environment is obviously a positive development. On the other hand, if full-size trucks are the only segment moving the needle, how many sales are Detroit automakers losing as inventory drops off a cliff, since factories are no longer churning out trucks? The answer is: probably more than you think. Consider that General Motors had already had an inventory disruption from its 40-day United Auto Workers (UAW) strike, a development that inventory levels still hadn't fully recovered from.

Furthermore, as COVID-19 concerns and restrictions intensified and consumers became more cautious, dealerships resorted to no-interest loans, seven-year loans, and other incentives, all intended to entice consumers into a big-ticket purchase despite the economic uncertainty. All of those factors combined led J.D. Power to estimate that light-duty pickup inventory in the U.S. could drop to 400,000 units by the end of May and could drop as low as 260,000 units by the end of June -- that's a far cry from the 700,000 units in stock at the end of June of 2019.

If dealerships don't have the right trucks, they can't sell them. Without a wide range of options, some consumers may opt to try a competitor's product if they happen to have the specific options or combinations desired -- which is historically unusual, and extremely undesirable, in the highly loyal truck segment -- and some may try an entirely different route, by buying a used truck instead of a new one.

Most investors have an idea that full-size pickups are important to Detroit, but many might not realize just how important those vehicles are. Let's use Ford as an example. Ford doesn't have a wildly successful or high-volume luxury brand, so it has less opportunity for high-margin sales than many foreign automakers, or even General Motors with its growing global Cadillac lineup. That means Ford is even more reliant on full-size pickups to haul in the big bucks than most competitors, but you might be shocked to see numbers put around that notion.

Morgan Stanley analyst Adam Jonas previously wrote in a note to investors that "the F-150 franchise may be worth more than 150% of the company's enterprise value." Furthermore, Jonas and his team estimated that a 5% drop in F-150 production could be worth almost 10% to Ford's earnings, and that the truck line could generate up to 105% of Ford's total operating profit at that time. With plants temporarily closed, and inventory for pickups thinning, it's reasonable to predict a brutal second quarter for Detroit automakers.

Seeing estimates like that from Jonas also makes it easier to understand why Ford, and other major automakers, have drastically reduced production and development of cars in favor of larger and more profitable SUVs and trucks. Trucks are critical for automakers to generate better margins and profits. At a time when automakers are still preparing to reopen factories as safely as possible, and dealership foot traffic has plunged, few investors would have guessed a month and a half ago that the most devastating problem facing Detroit automakers would be a lack of inventory.

This is just the latest example of how unpredictable COVID-19's economic impacts have been, and how the ripple effects can cause unusual outcomes. Here's to hoping we all get through this, and back to a sense of normalcy, sooner rather than later.