Please ensure Javascript is enabled for purposes of website accessibility
Log In Help Join The Motley Fool
Free Article Join Over 1 Million Premium Members And Get More In-Depth Stock Guidance and Research
By Rhian Hunt – May 9, 2020 at 10:45AM

A streamlined central company and local room for initiative enabled an efficient response to the pandemic.

The COVID-19 pandemic slammed restaurant profits deep into negative territory when it shut down dine-in facilities across the U.S. in March. But according to Dunkin' Brands' (DNKN) fiscal first-quarter earnings report, the flexibility provided by its franchise model might have softened the blow.

If this is indeed the case, then Fools investing in consumer-discretionary stocks might look to the coffee, donut, and ice cream chain to recover swiftly when America reopens for business. 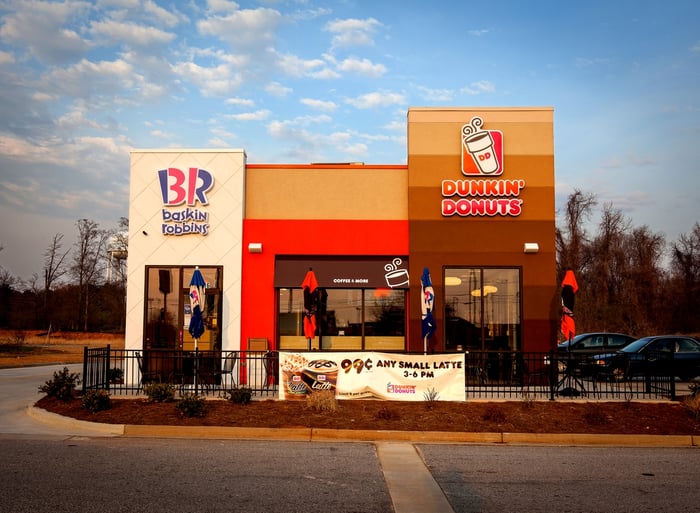 What the pandemic did to Dunkin'

Before confirmed COVID-19 cases began erupting on the east and west coasts in late February and early March, Dunkin' appeared to be on track for a solid first quarter. Comparable-store sales, or comps, grew for both of Dunkin's main subsidiary brands in the first 10 weeks of the quarter. Dunkin' stores cooked up 3.5% comps growth, while Baskin-Robbins posted scorching 11.0% growth.

Dunkin', pursuing its strategy of expansion into untapped markets in the western U.S. and abroad, even managed to launch some new restaurants in the brief period before the pandemic began. The disease halted new openings for the time being, but a net total of seven U.S. and 38 global locations joined the roster during the quarter, inching it closer to its strategic goal of opening 1,000 new restaurants by the end of 2020.

The pandemic came as a gut-punch to Dunkin', dropping its share value by nearly 50% at its deepest lows in March. As the outbreak spread rapidly, restaurants shuttered their dine-in facilities, and Dunkin's comparable-store sales plummeted 19.4% and 23.3% at Dunkin' and Baskin Robbins, respectively, in the last three weeks of the quarter.

Comps across the company declined as much as 35% at the very end of March and into early April. Approximately 10% of Dunkin' locations, and somewhat fewer Baskin-Robbins locations, closed entirely for the duration. These restaurants are located in cities with major outbreaks, including Philadelphia and New York City, or at places such as airports and universities where a total lockdown occurred.

How a franchise model saved the day

Dunkin's 100% franchised business model gave it at least one crucial advantage from the start, since its capital expenditures, or capex, were already much lower than those for a company running all or part of its store base directly. It also acted to reduce spending further, slashing about $45 million off its budget by cutting expenses, suspending 401(k) contributions, and other measures. The company will temporarily cease paying its dividend, saving it another $33 million in the second quarter.

The fact that most restaurants are independent franchises made many locations eligible for federal Paycheck Protection Program (PPP) loans under the Coronavirus Aid, Relief, and Economics Security Act (CARES), signed by President Trump on March 27. The company says the current average franchisee has approximately 150 people on their payroll, putting them well under the threshold of 500 employees at which they become disqualified from receiving PPP funds.

Dunkin' also waived rent for a month and deferred further rental payments by two more months on the approximately 900 properties it owns and leases directly to franchisees, out of about 9,600 Dunkin' and 2,500 Baskin-Robbins domestic restaurants. However, the relationships with local landlords, lenders, and banks many franchisees built up during past years enabled them to negotiate loans or other relief without putting a strain on the company.

The distributed decision-making created by the franchise model additionally let franchisees adapt to local conditions more easily than if all were following a centralized company mandate. According to the earnings call, individual franchisees adjusted hours of operation and the number of people they kept on the job to fit their area's health response to COVID-19 and adjust to customer demand. Dunkin' remained in the background as an overall coordinator, helping with information or negotiation in matters too big for franchisees to handle on their own.

The availability of PPP funds and highly adaptable response enabled by the franchise model seems to have let Dunkin' emerge fairly quickly from the shadow of COVID-19. While sales are still depressed, Dunkin' predicts a typical franchisee will still realize 80% of the cash flow in 2020 they would have generated without the coronavirus.

Hoffmann also noted takeaway sales were part of 90% of traffic before the pandemic. The company has recently strengthened its delivery-service alliances, now offering delivery with Grubhub, Uber Eats, Doordash, and PostMates, among others, at approximately 4,000 restaurants, doubling its pre-coronavirus delivery footprint. Its grocery channel is also seeing between 20% and 30% growth in bagged coffee sales, adding purchases from people stocking up at supermarkets.

Overall, Dunkin's far-flung network of franchises seems to have served it well during the pandemic. Very lean central capex spending, combined with a measure of local franchise autonomy and flexibility, seem to have partially insulated the broader operation. The stock value has bounced back over 65% from its mid-March low its, and with the company's demonstrated adaptability and quick recovery, it looks like a company with a strong chance of continuing its long-term success.