But it plans to keep R&D and future-product programs fully funded.

Toyota Motor (TM -1.47%) reported operating profit of 384 billion yen ($3.58 billion) for the quarter that ended on March 31, down 27.5% from a year ago, and warned that the ongoing effects of the COVID-19 pandemic could drive its operating profit down almost 80% over the next four quarters.

But despite the warning, Toyota said that it will maintain its pre-outbreak levels of new-product and capital spending, more than $10 billion in the coming fiscal year, as it expects demand for new vehicles in the U.S. and Europe to fully recover in the first half of 2021.

What Toyota said about the fiscal year ahead

In a news conference, CEO Akio Toyoda said that he expects the decline in vehicle sales following the coronavirus pandemic to be "bigger than during the Lehman crisis." But, he said, because Toyota expects to remain profitable in the coming fiscal year, it will continue investing in new products and future technologies, including self-driving vehicles.

Here's Toyota's official guidance to auto investors for the fiscal year that will end on March 31, 2021:

Toyota's forecasts assume average exchange rates over the year of 105 yen per U.S. dollar and 115 yen per euro. 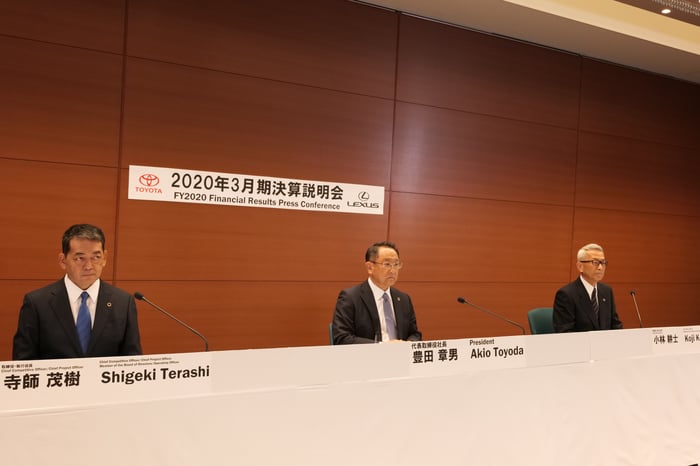 How Toyota performed in the quarter

Toyota didn't give investors much color on its regional results, aside from the obvious impact of the COVID-19 outbreak, but here are the numbers.

As of March 31, Toyota had 2.774 trillion yen (about $25.9 billion) in cash available to its automotive business, down from 2.79 trillion yen at the end of the prior fiscal year.

Toyota noted that in April, it set up a new revolving line of credit totaling 1.25 trillion yen ($11.65 billion), to bolster its balance sheet against the risk that the pandemic could have a more prolonged impact than it currently expects.

Data source: Toyota Motor. Vehicle sales include Toyota's joint ventures with Chinese automakers and are rounded to the nearest thousand. See above for details of one-time items. PP = percentage points.

And for the year ended March 31: