Please ensure Javascript is enabled for purposes of website accessibility
Log In Help Join The Motley Fool
Free Article Join Over 1 Million Premium Members And Get More In-Depth Stock Guidance and Research
By Rich Smith – May 13, 2020 at 2:02PM

United will warn COVID-19-fearful flyers ahead of time if flight will be crowded.

Would you believe it's -- partly, at least -- because there's too many people flying on airplanes?

Twitter postings over the weekend, showing a nearly full United Airlines flight between Newark and San Francisco, are provoking a "social media backlash" against the airline, Reuters reported yesterday. 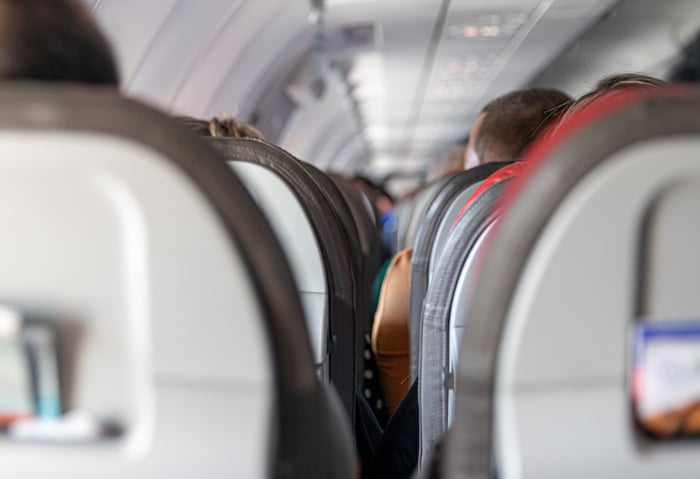 United insists that the media reports of plane groundings and light passenger traffic are correct -- that in fact, 85% of the flights it is still flying are less than half full. Still, "85%" is not "all," and the airline told Reuters that "there are a small number of flights where our customers are finding planes fuller than they expect."

With COVID-19 still widespread in America, no proven quick and effective treatment for the disease discovered, and no vaccine approved, travelers are understandably still a bit nervous about sitting packed shoulder to shoulder in an aluminum tube full of strangers wearing masks. Just earlier today in fact, Appaloosa Management head David Tepper opined on CNBC that airlines have a "middle seat" problem. Put someone in a middle seat, and you make the passengers on either side of him nervous. Don't fill that middle seat, though, and you're sacrificing as much as a third of your potential revenue.

To help allay (or avoid) the former concern, United announced yesterday that it will begin notifying passengers ahead of time if a flight on which they are booked looks likely to be "closer to full capacity." Under the new policy, the airline will also inform passengers waiting to board if more than 70% of expected passengers have already checked in. In both cases, the idea will be to give passengers an opportunity to cancel and rebook on a different flight that's perhaps not quite so sardine-like, or perhaps take a travel credit and try again another less-crowded day.

United says it will begin putting out these capacity warnings next week, and will continue doing so through June 30.