Please ensure Javascript is enabled for purposes of website accessibility
Log In Help Join The Motley Fool
Free Article Join Over 1 Million Premium Members And Get More In-Depth Stock Guidance and Research
By Jeremy Bowman – Updated May 13, 2020 at 8:36AM

Rumors are swirling about an Uber acquisition, but would it be worth it?

Grubhub (GRUB) stock was flying higher Tuesday after Bloomberg reported that Uber (UBER 6.91%) had made an offer to acquire the online takeout marketplace.

Grubhub stock rose as much as 38.8% on the news with its market cap reaching $5.9 billion, while investors bid up shares of Uber as well, showing approval of the deal from both sides. Shares of the ridesharing giant gained as much as 8.9%.

It's easy to see why investors cheered the potential deal. Profits have been squeezed in the industry in recent years by intense competition among Grubhub, Uber Eats, privately-held DoorDash, and to a lesser extent, Postmates. The dogfight for market share was grueling enough to send Amazon packing up its own restaurant-delivery business, Amazon Restaurants, while Square bowed out of the race, selling Caviar to DoorDash for $410 million last August.

An Uber takeover of Grubhub would essentially make the industry a duopoly with Uber Eats and DoorDash facing off against each other. According to data from Second Measure, a data analysis firm, DoorDash had 42% market share in the U.S. in March, while Grubhub had 28%, and Uber Eats captured 20%. Grubhub also has a majority market share in New York, the biggest food-delivery and takeout market in the U.S., and leading positions in Chicago and Boston.

Consolidation generally lifts profits in a given industry, which seems to be why Uber stock gained on the news, but investors may want to ask if Grubhub deserves a price near $6 billion. 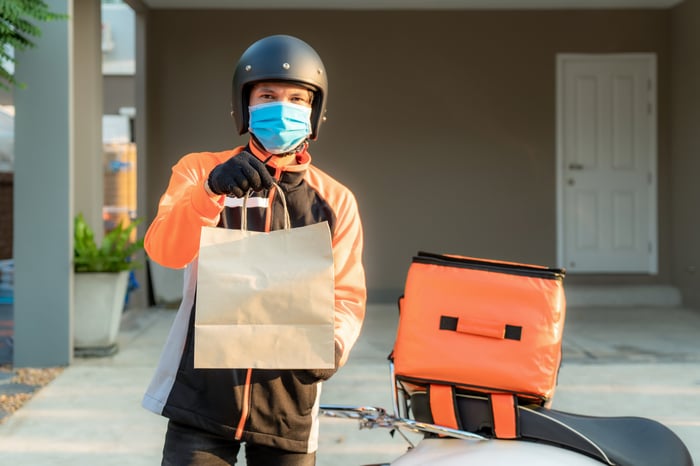 Even before the pandemic, Grubhub was struggling.

In 2017, not long ago, Grubhub owned 70% of the online restaurant-delivery market. But cutthroat competition from Uber Eats and DoorDash -- employing a model that provided delivery for restaurants and which Grubhub later embraced -- quickly ate into Grubhub's leadership.

Customers who once had been loyal to Grubhub were now being lured by coupons and discounts from competitors. On its earnings call last October, Grubhub CEO Matt Maloney even complained about customers being "promiscuous" when profits unexpectedly tumbled. Since then, the company has taken the bizarre step of ramping up business with non-partnered restaurants, or eateries that have not agreed to be on the platform. Grubhub is doing that to give customers more choice, but the strategy seems to be a losing one as it has irked restaurants that don't want takeout orders and seems to have no path to profitability.

Grubhub seemed to get a second wind during the pandemic as the company saw a spike in restaurants listing on its platform as dine-in eating disappeared. But the takeout marketplace is spending heavily to keep the battered industry afloat. The company is targeting just $5 million in adjusted earnings before interest, taxation, depreciation, and amortization (EBITDA) after spending more than $50 million on safety and marketing to increase orders, which it expects to generate $150 million in gross food sales.  Given the challenges facing the restaurant sector, Grubhub and the rest of the online delivery industry is also going through a period of unprecedented uncertainty.

Does it make sense for Uber?

Uber Eats has been a rare bright spot for the ridesharing giant during the pandemic as demand in its core ridesharing business has plunged with rides bookings falling 80% in April.

Uber also booked an impairment charge of $2.1 billion related to investments in Didi and Grab, two Asian ridesharing companies -- an example of the prolific investments Uber has already made. While Uber's balance sheet is strong with $9 billion in cash and short-term investments, there's no question that it will take a hit during the pandemic, especially as the recovery in ridesharing is likely to be slow as businesses will continue to allow workers to stay at home and consumers avoid travel.

The company had a free cash flow (FCF) loss of $661 million in the first quarter, and it lost $4.9 billion in FCF in 2019, showing it's likely to burn billions in cash over the coming quarter.

Uber envisions itself as the Amazon of transportation, a sprawling business focused on the long term and building competitive advantages, but Uber has already over-leveraged itself with Uber Eats, selling out of a number of foreign markets in order to cut costs, and the company has run into regulatory problems multiple times, most recently in California where it could be forced to reclassify its independent contractors.

Taking over Grubhub would eliminate a competitor and expand Uber Eats' customer base, but most of Grubhub's value comes from its brand, and that has proven to be weak, having shed significant market share in recent years.

The restaurant industry will be severely challenged in the coming months. Even if stay-at-home orders are lifted and customers feel safe enough to dine in at restaurants, the country is sinking into a recession that will impact discretionary spending for the foreseeable future, and a significant percentage of restaurants could be forced to close their doors permanently. Given those circumstances, $6 billion right now seems like a rich price to pay for a competitor whose growth has slowed and whose profits have all but disappeared.

If Uber waits a little while longer, it could get a much better deal.