Please ensure Javascript is enabled for purposes of website accessibility
Log In Help Join The Motley Fool
Free Article Join Over 1 Million Premium Members And Get More In-Depth Stock Guidance and Research
By Matthew DiLallo - May 13, 2020 at 9:13AM

The oil company expects to "endure with relevance" as it battles through the market's current downturn.

Parsley Energy (PE) is far from immune to the issues currently facing the oil market. The company has had to make significant changes to its 2020 operating plan so that it can navigate these challenging times. However, it believes it can endure this downturn and come out on the other side as a more relevant company that can create value for investors. That outlook makes it an intriguing oil stock for investors seeking a bounce-back candidate.

Parsley Energy recently reported its first-quarter results, which demonstrated that it's enduring the currently brutal market conditions reasonably well. The company noted that its first-quarter oil output zoomed 41% quarter over quarter and 61% year over year, due to its recent acquisition of Jagged Peak Energy and the success of its drilling program. Those factors, as well as its ability to keep a lid on costs, enabled Parsley to produce $0.29 per share of adjusted earnings during the first quarter, which beat analysts' expectations by $0.05 per share. 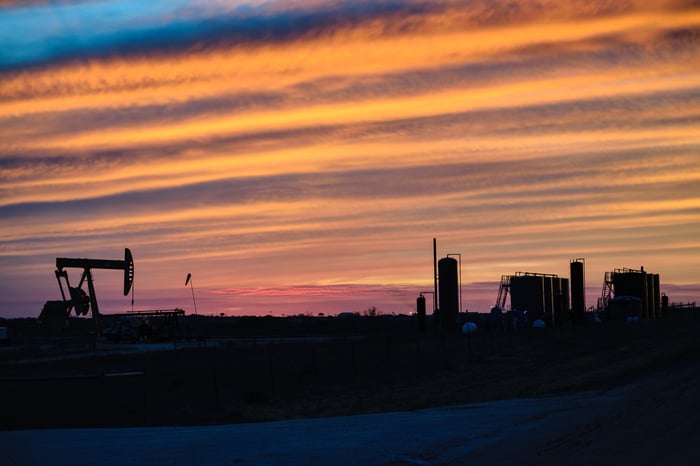 One factor that helped boost its profits was its oil hedging program. Those contracts allowed it to sell oil for an average price of $49.17 per barrel during the quarter, which was an improvement from the $45.32 per barrel it would have fetched without those hedges.

How Parsley Energy is navigating the oil market downturn

Parsley Energy took several steps during the first quarter to enhance its ability to navigate through the current market downturn so that it can prosper when conditions improve. These adjustments included:

As a result of these moves, Parsley Energy estimates that it can generate at least $300 million in free cash flow this year, assuming oil prices are in the $20-to-$30-a-barrel range. That will provide it with the cash to maintain its dividend and strengthen its balance sheet. It had a net $255 million borrowed on its $1.075 billion credit facility that it could pay down to further increase its financial flexibility and liquidity. The company also expects that it will continue generating free cash in 2021 thanks to its hedges and low-cost operations.

Meanwhile, these moves preserved Parsley Energy's optionality to higher oil prices. The company, for example, can restart shut-in wells as oil prices improve and immediately capture that cash flow. Further, by suspending well completion activities, Parsley now has a growing inventory of drilled but uncompleted wells that it can quickly finish as prices improve. On top of that, it has large list of drilling locations that it can develop in the future to resume production growth once oil prices rebound to around $50 a barrel.

The strength to endure

Parsley Energy revised its operating plan on the fly as oil prices fell this year. That flexibility, when combined with its low-cost operations, oil hedging program, and balance sheet strength, enhances its ability to endure these tough times. Meanwhile, those same factors will enable the company to quickly ramp back up once oil prices improve. Because of that, CEO Matt Gallagher believes Parsley will "endure with relevance" as it's one of the few producers that could emerge from this industry downturn in an even stronger position to create shareholder value.

Another Oil and Gas Merger May Be Coming Soon

Why These Oil and Gas Companies Got Clobbered in September