Please ensure Javascript is enabled for purposes of website accessibility
Log In Help Join The Motley Fool
Free Article Join Over 1 Million Premium Members And Get More In-Depth Stock Guidance and Research
By Rhian Hunt - May 14, 2020 at 9:30AM

From the daredevil to the tried-and-true, these stocks offer something for every type of investor.

The food and restaurant sectors are still reeling from the shutdowns and stay-at-home orders brought on by the response to the COVID-19 pandemic. However, these extreme conditions have also brought to light several companies that have shown their potential to manage to ride out "black swan" events and remain profitable both in good and bad times.

Three consumer staples stocks in the food market that are demonstrating these characteristics include Beyond Meat (BYND 6.70%), Mondelez International (MDLZ -1.36%), and General Mills (GIS -0.84%). Let's explore some reasons why these companies are managing so well.

1. Beyond Meat: Who knew pea protein could be so popular?

Posting 141% revenue growth in the first quarter of 2020, Beyond Meat continues to be the maverick delivering an unexpectedly positive outcome and winning over investor sentiment, even if analysts raise a skeptical eyebrow at its future. Now trading at around its pre-coronavirus levels, the plant-based meat-substitute maker saw its shares pop above $125 following its mouthwatering earnings report on May 6. 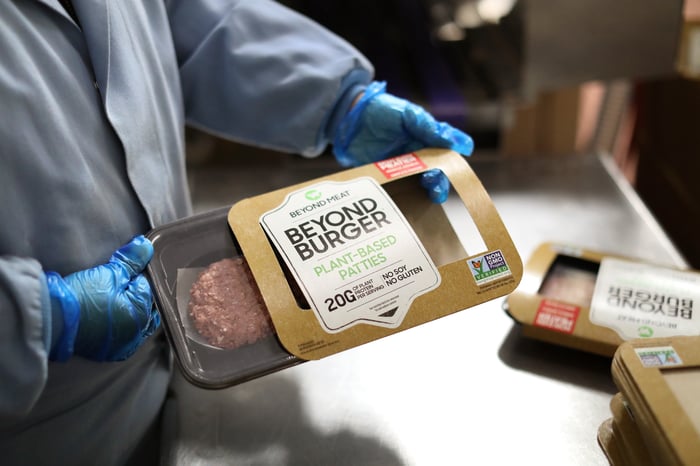 Continuing to do its best imitation of Tesla Motors and smoothly evade all the pitfalls that pundits forecast will bring its stock price crashing back to earth, Beyond Meat enjoys several favorable factors that may help sustain its winning streak.

In the short term, COVID-19-related interruptions to the U.S. meat processing and distribution chain could help make Beyond Meat's plant protein burgers a viable alternative when conventional meat gets scarce. With its specially developed vegan meat substitutes perhaps close enough to the real thing for even dedicated carnivores to tuck in, the company aims to lower its product price far enough to compete with meat counterparts. Disrupted supply has driven average beef prices up over $4 per pound. If the coronavirus continues to hamstring meatpacking into the summer, the strategy might boost Beyond Meat's profits in the medium term.

Furthermore, Beyond's push into international markets seems to be gaining ground. Propelled by its grocery segment, its international retail sales shot up by 4,944% year over year. The company is barreling ahead with its efforts to establish a bridgehead in China, including closing in on the launch of local production facilities, to tap into the huge and apparently receptive Chinese market. Based on Beyond Meat's vigorous fundamentals and its drive to make the most of its strengths and opportunities, some optimistic analysts even foresee share prices north of $300 during the 2020s. Those feeling optimistic about the scrappy plant-based meat maker may want to add it to their portfolios while it's "only" around $120 per share.

Though hardly a household name itself, Mondelez International owns plenty of brands that are, from Oreo to Toblerone. In recent months, Mondelez made a splash, and considerable profits, as more people sought out stress-managing sweet and salty snacks during the COVID-19 pandemic. The company's Q1 revenue soared 15.1% in the North American market, showing it's well-positioned to grow even under the stress of a major downturn.

While Mondelez's ability to stay profitable during an economic crisis is a plus for investors -- especially given the possibility the coronavirus will spike again in autumn -- there are plenty of longer-term reasons to consider adding to one's position in the cookie, candy, and cracker producer, too.

At first glance, Mondelez's total revenue figures appear to be stalled. Total revenue for 2016 was $25.9 billion, while in 2019 the metric came in at $25.8 billion. The years in between varied by only a few million dollars. A closer look, however, reveals the company's operating margin, aka return on sales, has grown over the years, from approximately 8% in 2009 to roughly 10.5% in 2017 and over 14% in recent quarters.

Mondelez is continuing to improve its return on sales through an ongoing strategy of lowering input costs and streamlining its distribution. The net income available to shareholders has grown from $1.6 billion in 2016 to $3.8 billion in 2019, raising diluted earnings per share from $1.05 to $2.65 over the same period.

Mondelez has also provided reliable dividends for many years. According to charts published as part of the company's presentation at the 2020 Consumer Analyst Group of New York conference, organic net revenue and several other important metrics are flourishing:

Mondelez International flies under the radar of many investors because it doesn't post spectacular total revenue gains. But a peek under the hood shows a well-managed, streamlined company that's improving efficiency while paying attention to boosting shareholder returns. Finally, it's positioned in the growing snacks sector -- which has just proven itself mostly immune to the COVID-19 downturn, one of the most significant economic disasters in recent memory.

General Mills, the maker of packaged foods, reported strong sales in March, at a time when other food and restaurant companies saw their profits shriveling in the grip of COVID-19 lockdowns. The many shelf-stable foods the company manufactures are not only profitable during catastrophic disruptions of ordinary life but may well continue to be popular after the coronavirus as people stock their pantries against similar future events.

And unlike scores, if not hundreds, of other companies strong-armed by circumstance into suspending their dividends, General Mills continues to pay its shareholders -- as it has done for 120 years. In nearly a century and a quarter, the company hasn't missed paying a single dividend.

General Mills is not, and probably never will be, a splashy headline stock. However, it offers plenty of reliability, especially when it comes to a dividend stretching unbroken through two World Wars, countless political upheavals, and pandemics such as the 1918 influenza and COVID-19. The possibility of persistent consumer demand for "storage food" might even boost its performance.

Where Beyond Meat is the plucky visionary pioneering a potentially highly profitable new market, and Mondelez is the quiet, unassuming efficiency expert who works meticulously to produce ongoing improvements, General Mills is the fortress-like bulwark keeping investments safe and dividends flowing through thick and thin.

The three stocks offer a spectrum of strengths appealing to many different investors. Whether it's playing it safe by emphasizing General Mills in your portfolio, taking a risk in the name of possible jackpot profits with Beyond Meat, or opting for a balanced strategy allotting an equal stake to all three, there's room in these food stocks for an interesting gamut of investment styles.