Please ensure Javascript is enabled for purposes of website accessibility
Log In Help Join The Motley Fool
Free Article Join Over 1 Million Premium Members And Get More In-Depth Stock Guidance and Research
By Maurie Backman – May 14, 2020 at 8:01AM

Americans are desperate for relief during the COVID-19 crisis, and some lawmakers are pushing to put more cash in their pockets via a second round of stimulus checks.

Millions of Americans have already received an initial $1,200 stimulus payment, and that money is serving as a lifeline for those whose finances have been negatively impacted by COVID-19. But for many households, that $1,200 falls short. Given that the typical U.S. household spends $5,102 a month, according to the U.S. Bureau of Labor Statistics, even a household with two adults and three kids under age 17 is limited to $3,900 in stimulus cash, which falls below the $5,102 mark. A new proposal, however, calls for a much more generous follow-up stimulus payment.

A second, larger payment is on the table

This week, House Democrats presented a new COVID-19 relief bill that includes, among other provisions, a second round of stimulus cash worth up to $6,000 per household. Specifically, that breaks down into $1,200 per adult whose income falls below a certain threshold plus $1,200 per child under the age of 17, up to a maximum of three children per family. And that could be instrumental in helping millions of Americans stay afloat during these turbulent times. 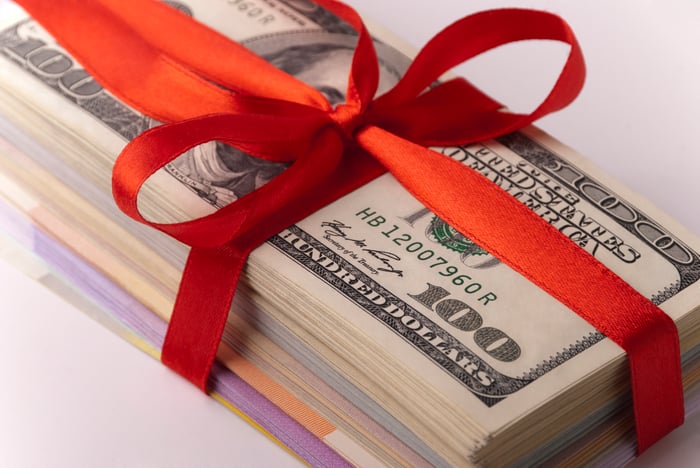 U.S. unemployment has already reached devasting levels, and the longer the economy remains shut down, the more workers risk finding themselves on the chopping block. Meanwhile, a large number of workers who still have an income have seen their hours cut and earnings reduced. As such, in addition to up to $6,000 in stimulus cash per household, the new relief bill also seeks to extend boosted unemployment benefits through January. Right now, workers on unemployment can collect an additional $600 a week through July, but this adds another six months to that provision.

Of course, that's not all the new bill does. It also calls for establishing a $200 billion fund to ensure that essential workers risking their lives during the pandemic receive appropriate hazard pay, and it includes subsidies so that workers who lose their jobs can maintain their health coverage through COBRA without the exorbitant price tag that generally comes with it.

Will the new bill actually pass?

There's already talk that Republicans will be loathe to pass this $3 trillion proposal (by contrast, the initial COVID-19 relief package that passed in March cost closer to $2 trillion). Some Republican leaders have made it clear that they feel a second round of stimulus money isn't needed yet, and the idea of extending boosted unemployment benefits may be met with a fair amount of resistance. As such, Americans shouldn't count on getting up to $6,000 in stimulus money per household just yet.

That said, it's clear that additional relief is needed in light of the fact that much of the country still remains shut down as of mid-May, two months after COVID-19 really started to take hold in the U.S. Hopefully, lawmakers on both sides of the political spectrum will be able to come to an agreement that helps Americans during this period of crisis.